Our deck with pergola is finished! And it took a whopping 3.25 days for three guys to build it.

I detailed in this post exactly what we were looking for in a deck. I even asked you guys to weigh in on the size of the pergola. And for the record, 70% of you voted for the larger pergola.

I think it’s important to show you the “deck” situation we had. The dimensions were something like 5×8 feet. As you can imagine, we hosted quite the parties on that deck. But you know, I’m glad we didn’t have our builder build the deck because, well, you should know by now. 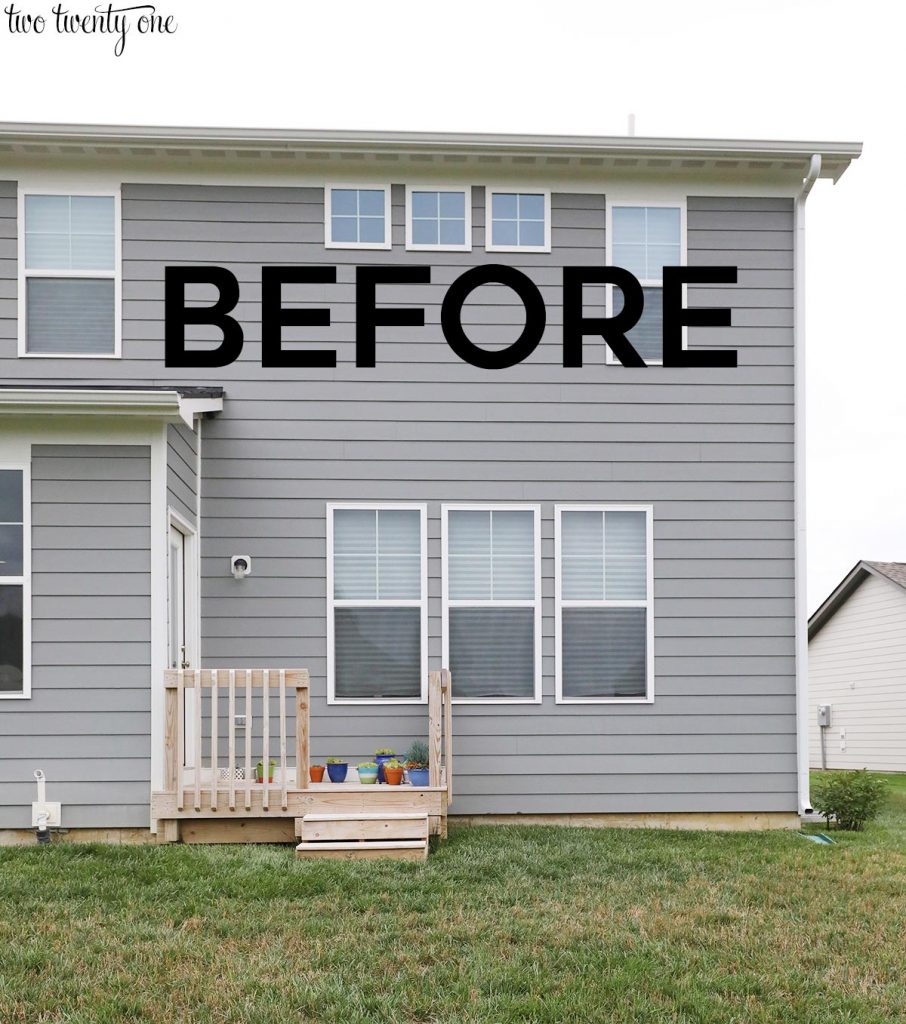 As a refresher, here’s what was on our deck wish list: 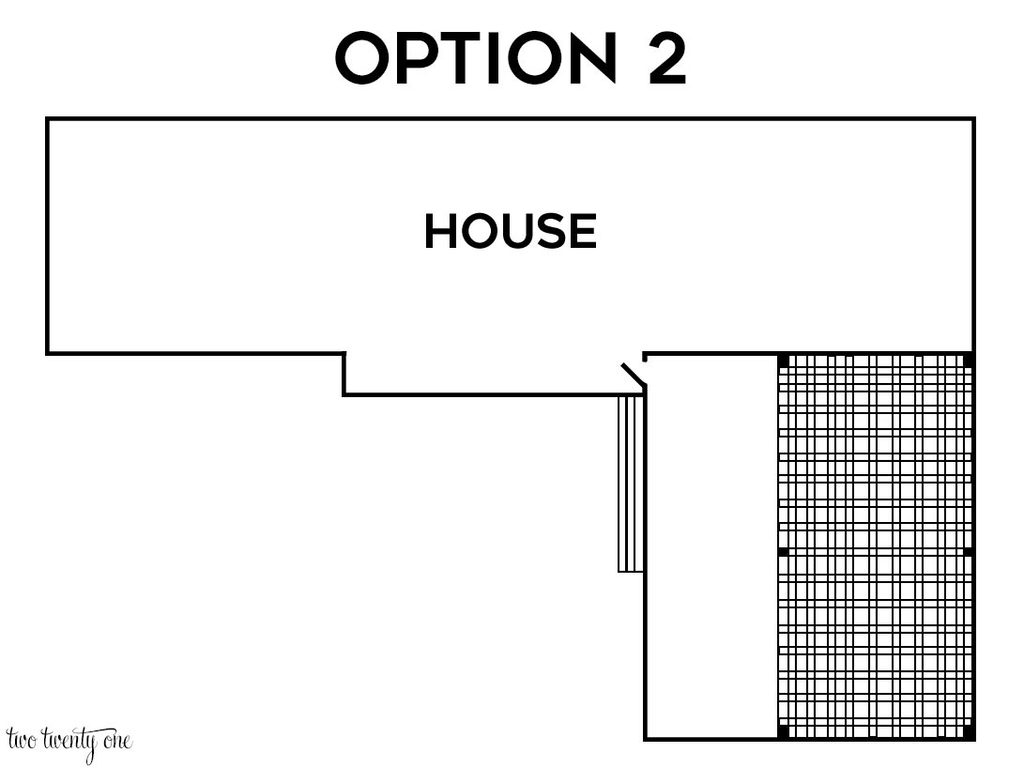 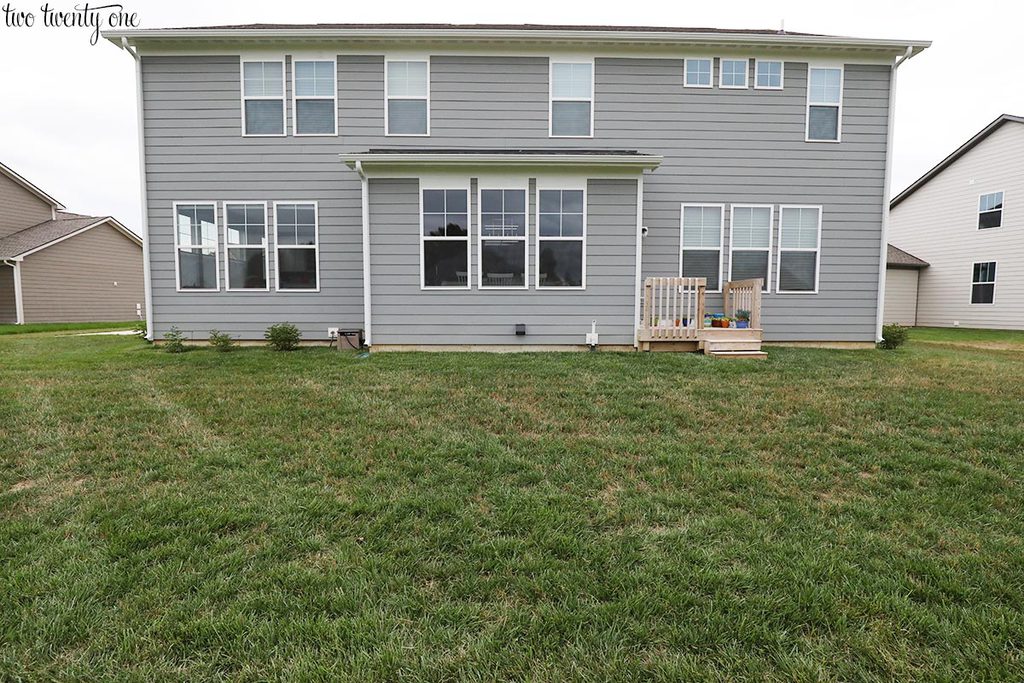 We used Fencing Unlimited Indianapolis to build the deck (not sponsored, we paid for the project). One of our neighbors used Bill and his crew to build their deck and pergola. Our neighbor had great things to say about them, so we got an estimate. Bill seemed easy to work with and the estimate was reasonable so we went with him. And while Bill didn’t necessarily agree with all of my ideas– ahem, the privacy screen, he went along with it. It was a pleasure working with him, and we’d definitely work with him again. We’re actually going to get an estimate from him for a fence. So if you live in the Indianapolis area and are looking to have a fence or deck installed, give him a call.

Bill and two of his guys arrived around 8:30AM on Monday. I had a blogger event at the state fairgrounds so the boys and I left before the guys got here. When we got back home that afternoon I was amazed how much they had done, especially because it was insanely hot and humid that day.

They had removed the old deck and framed the new deck and pergola before calling it a day. 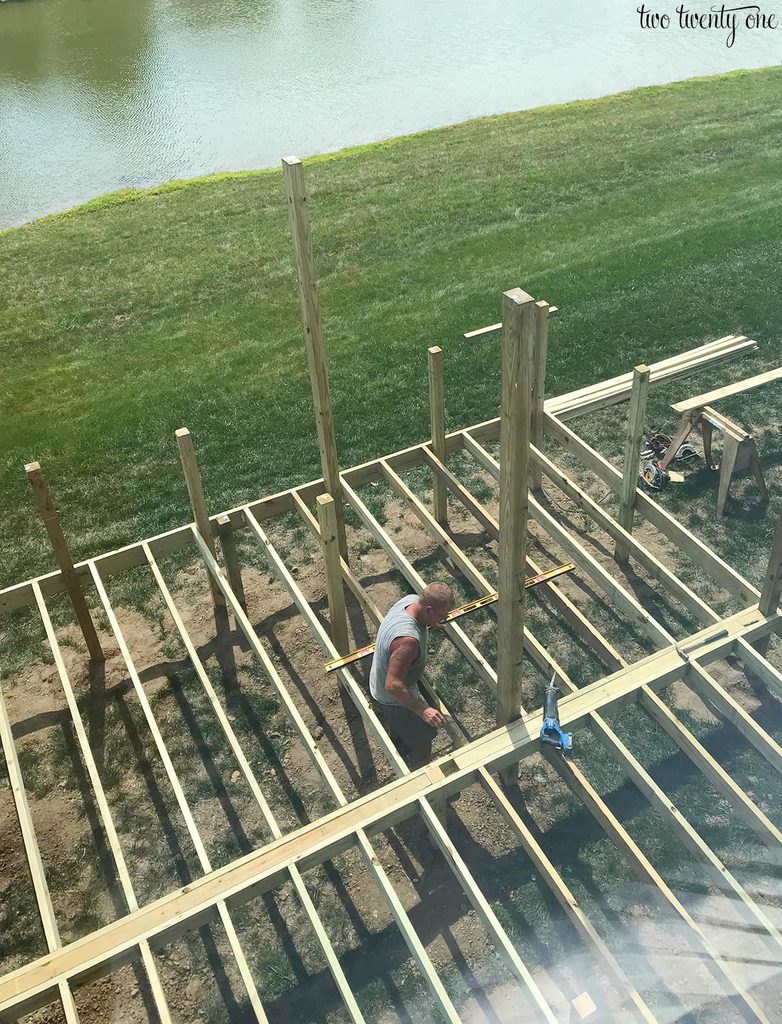 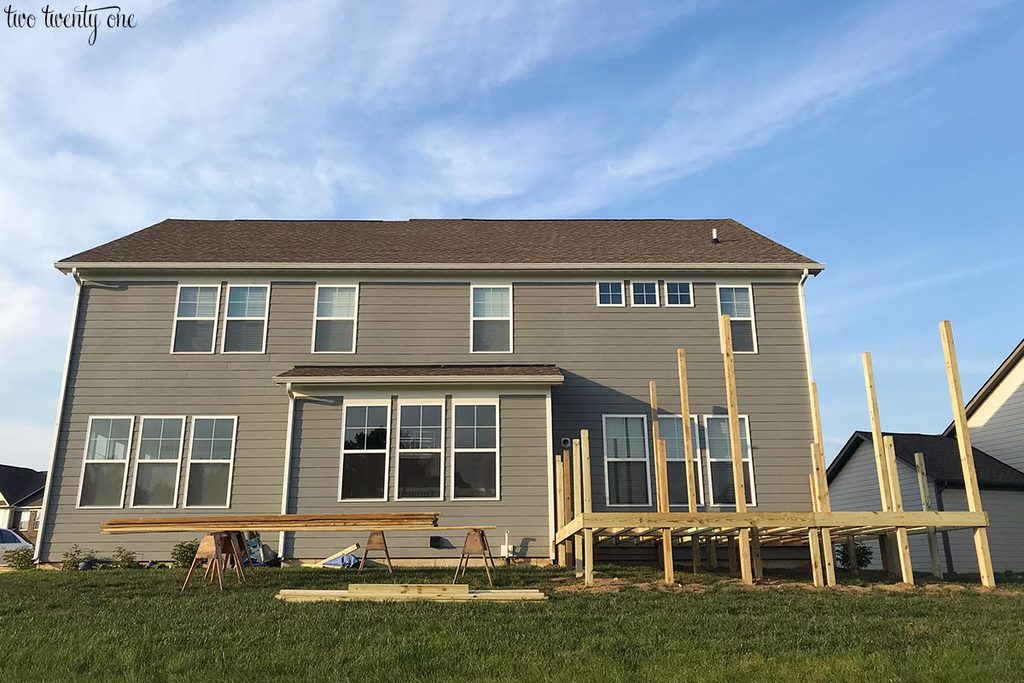 It was pouring rain Tuesday morning, and I told Brad I didn’t think they showed up until the rain stopped. To our surprise, the guys showed up around 8:30AM. They set up a canopy in the yard to protect their tools from the rain and got to work. Thankfully, the rain cleared up around 11AM.

They laid all the deck boards, completed the skirting, and railings on Tuesday. 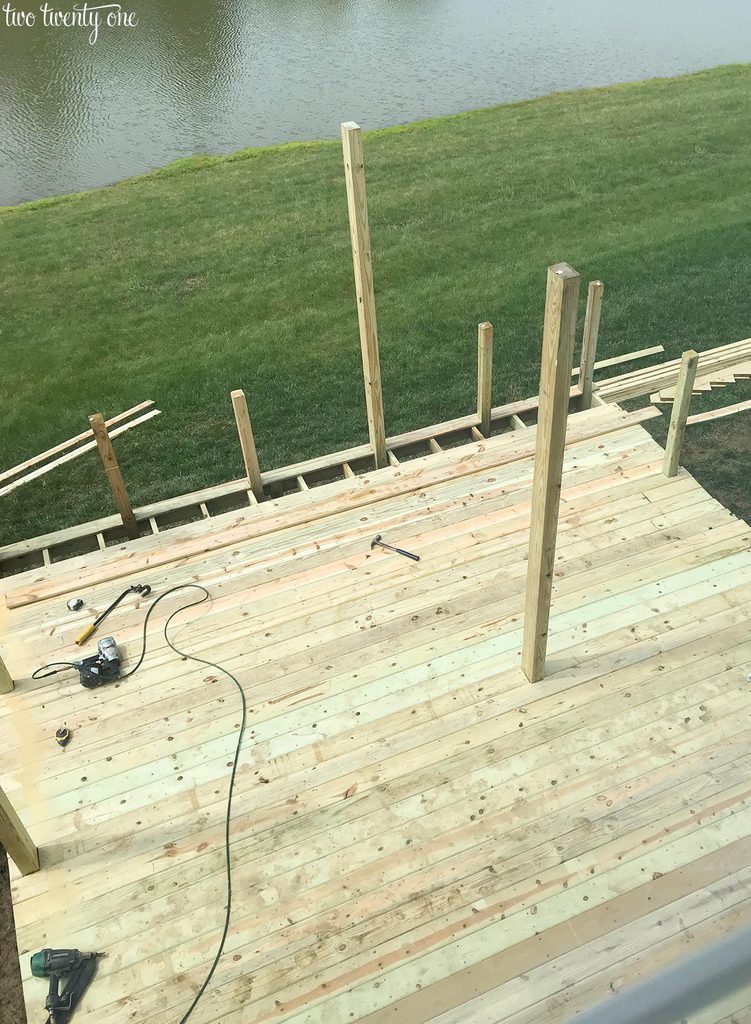 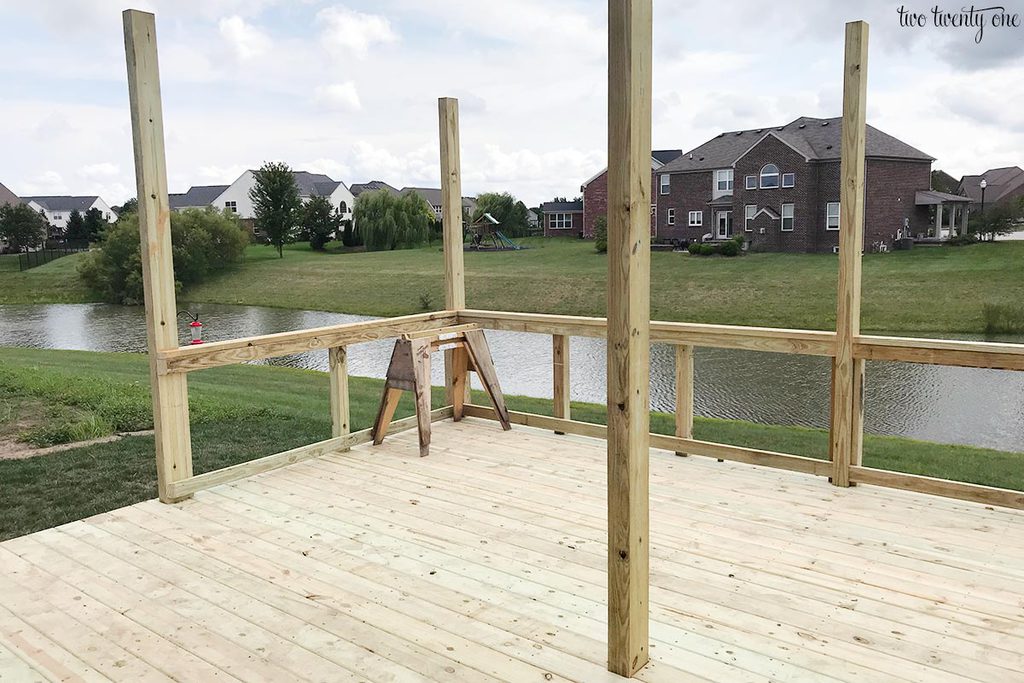 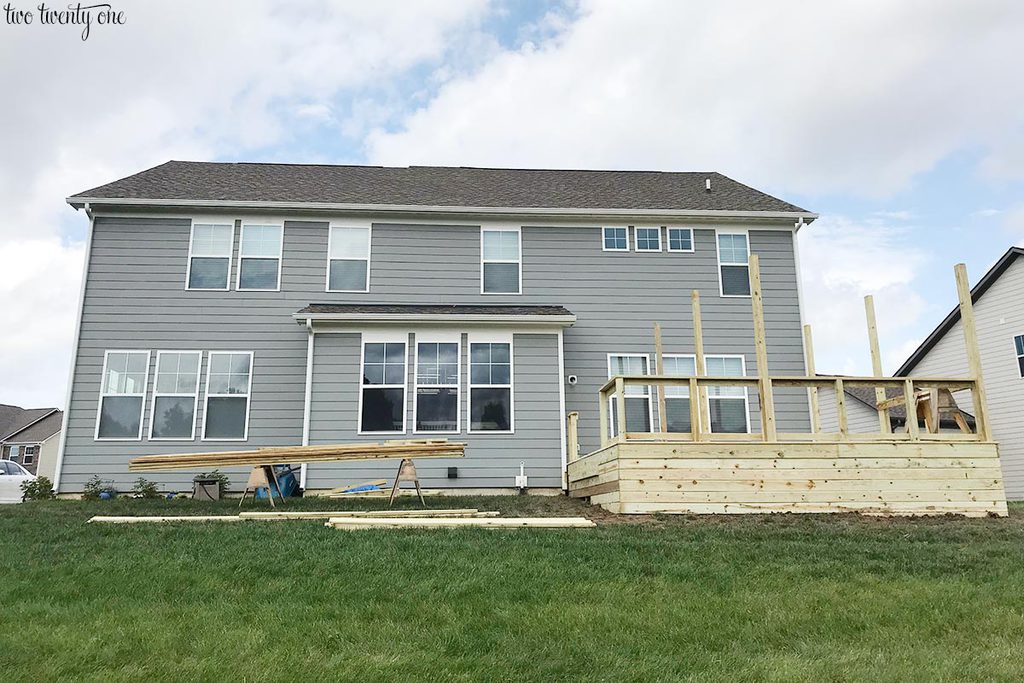 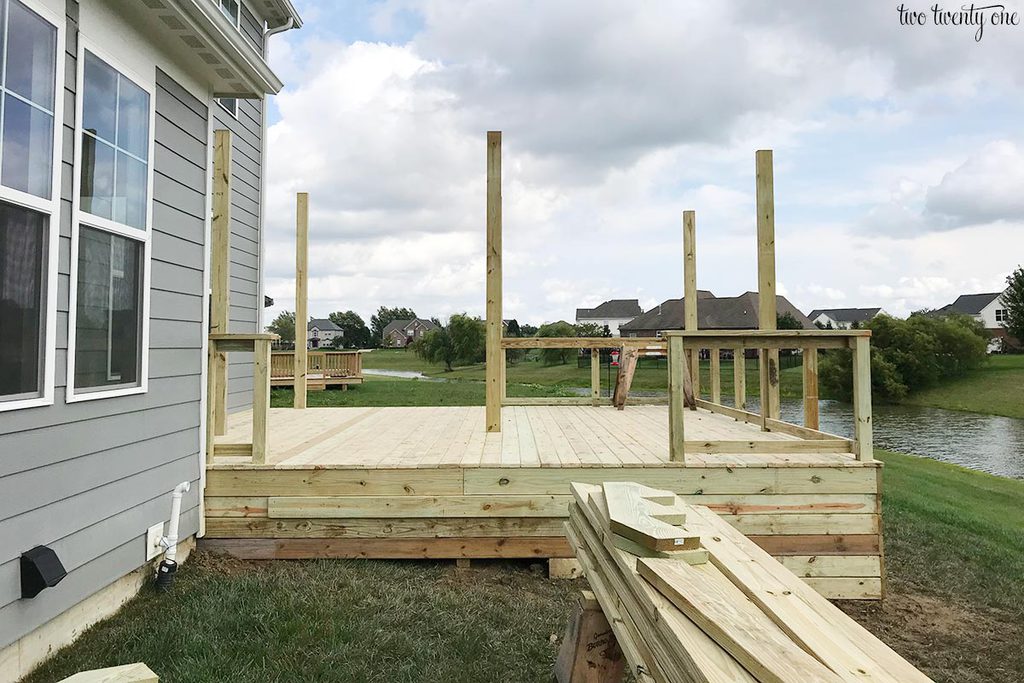 The guys got a ton done on Wednesday. They built the stairs and hand rails, completed the pergola, installed the spindles, got most of the privacy screen up, and filled holes and rough spots.

Because of the sump pump pipe and how the yard grades downward, we were limited on where the steps could go, but we’re happy with them. It actually created a nice little nook for our grill. 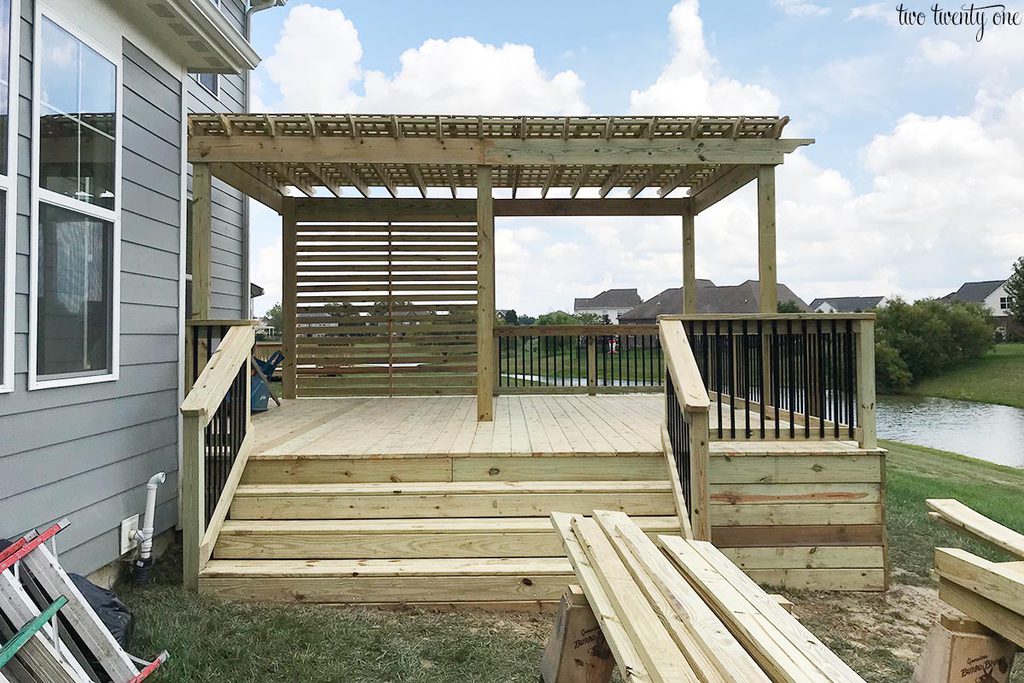 Bill and another guy were only here for about 2 hours Thursday morning to finish up. They installed the remainder of the privacy screen and sanded. By 11AM we had a completed deck and pergola. So in roughly 3 days, we had an 18×20 foot deck and 12×20 foot pergola. 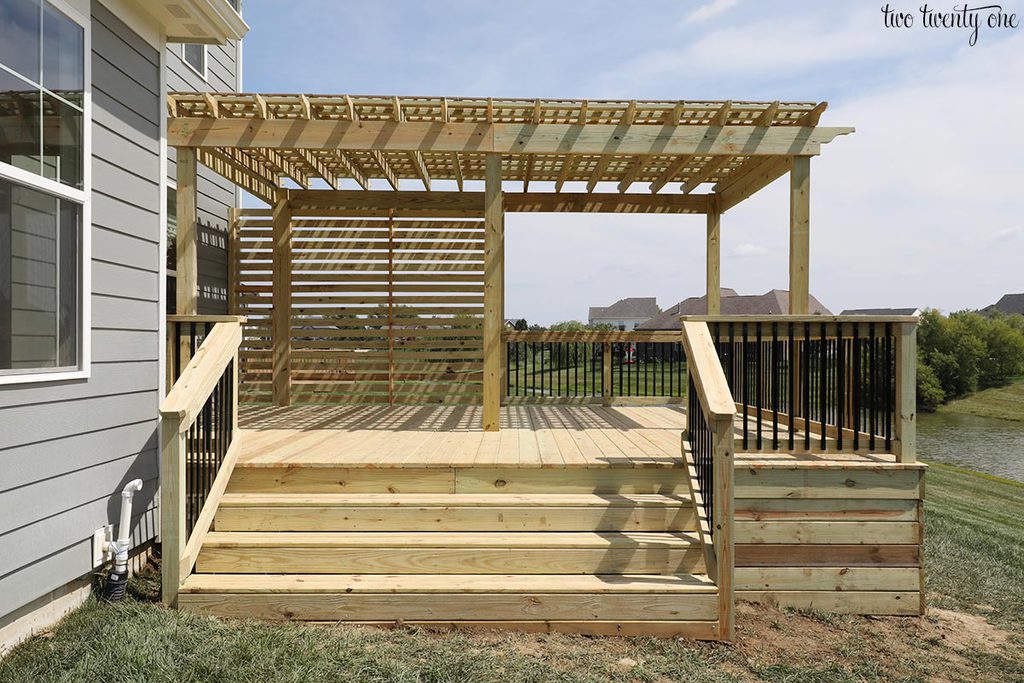 I’m looking forward to landscaping around the deck. I’d really like to plant some limelight hydrangeas. And more peonies. 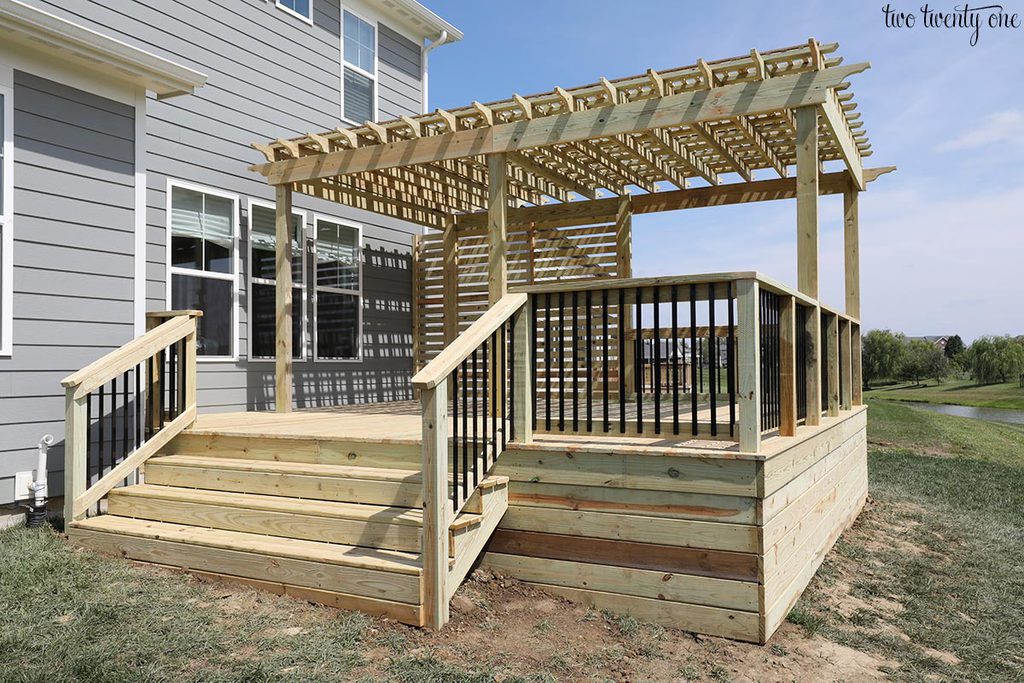 I love how the solid deck skirting anchors the deck. And it’ll hopefully keep pests from building their homes under the deck. 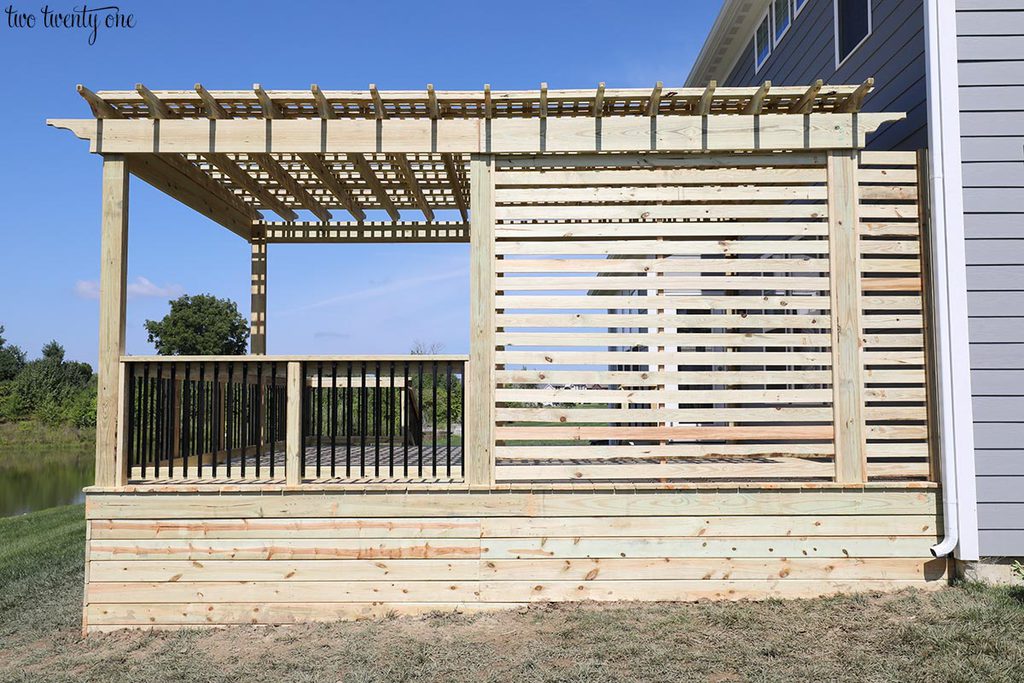 I’m still really tempted to paint the deck gray and pergola and privacy screen white to better blend in with the house. Some of you have messaged me and encouraged me not to take this route, so we’ll see. I have until next spring to figure it out. 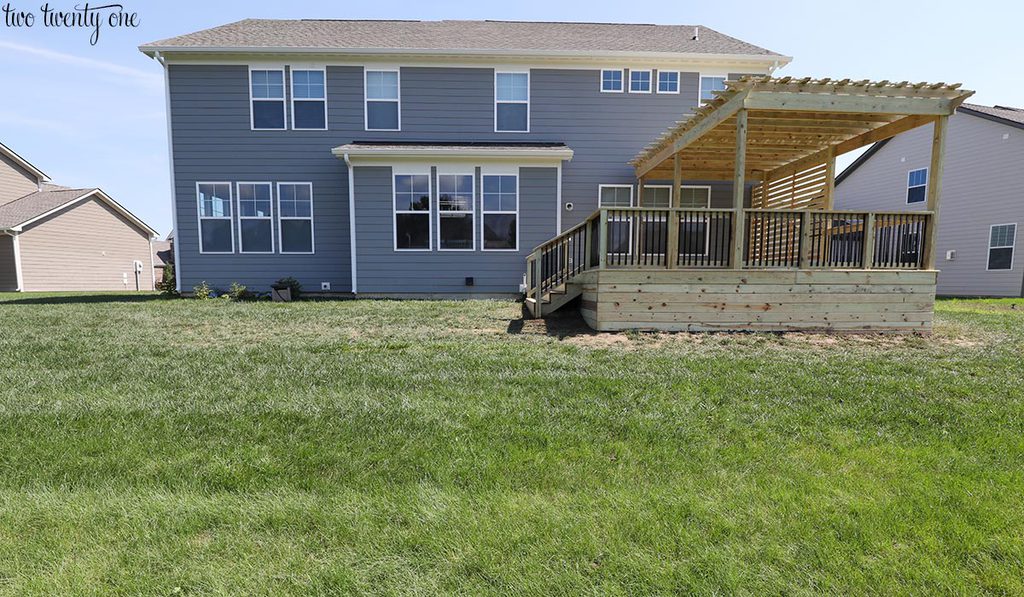 I’m so glad I asked for extra lattice on top of the pergola for additional shade. I did this so it would be more comfortable for the boys to play out on the deck in the morning and early afternoon. 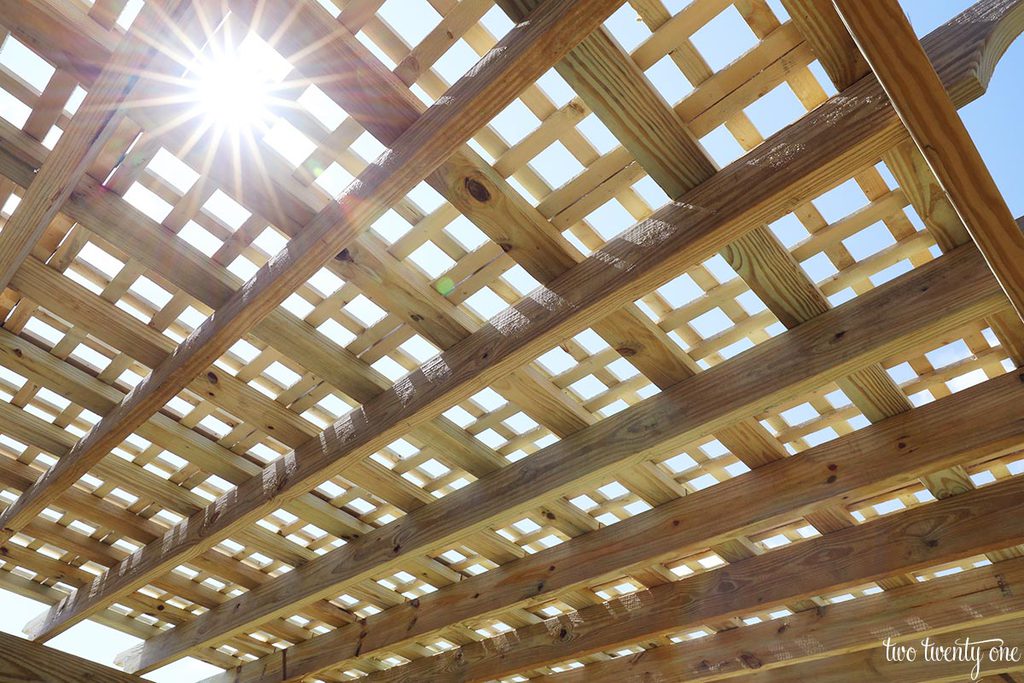 This photo below was taken around noon. You can see how much shade the pergola and privacy screen provide– almost the entire deck is shaded. 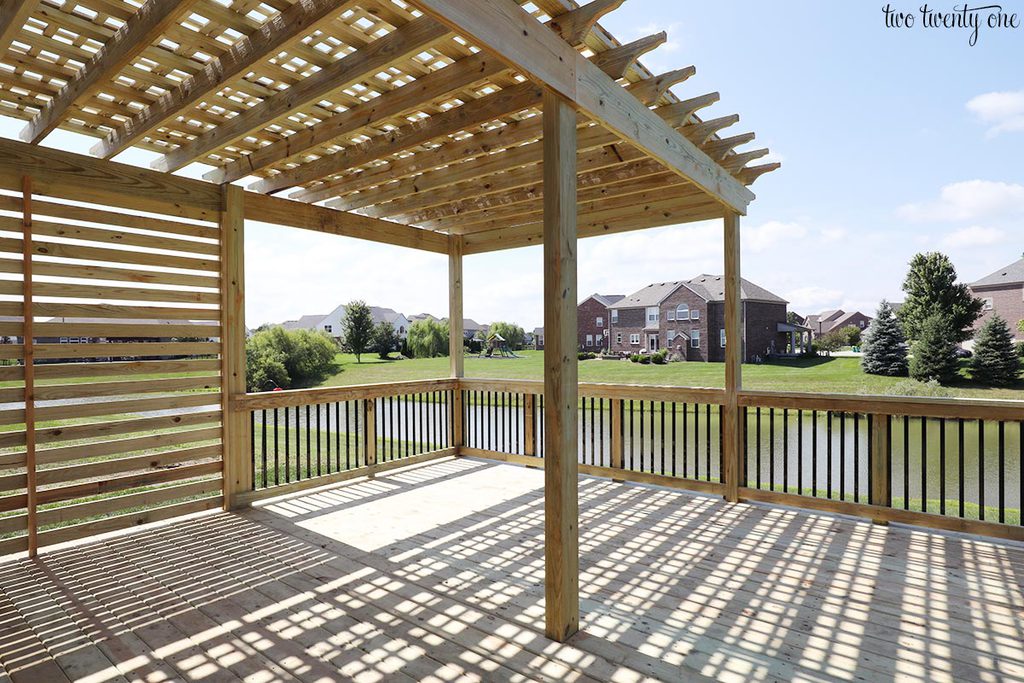 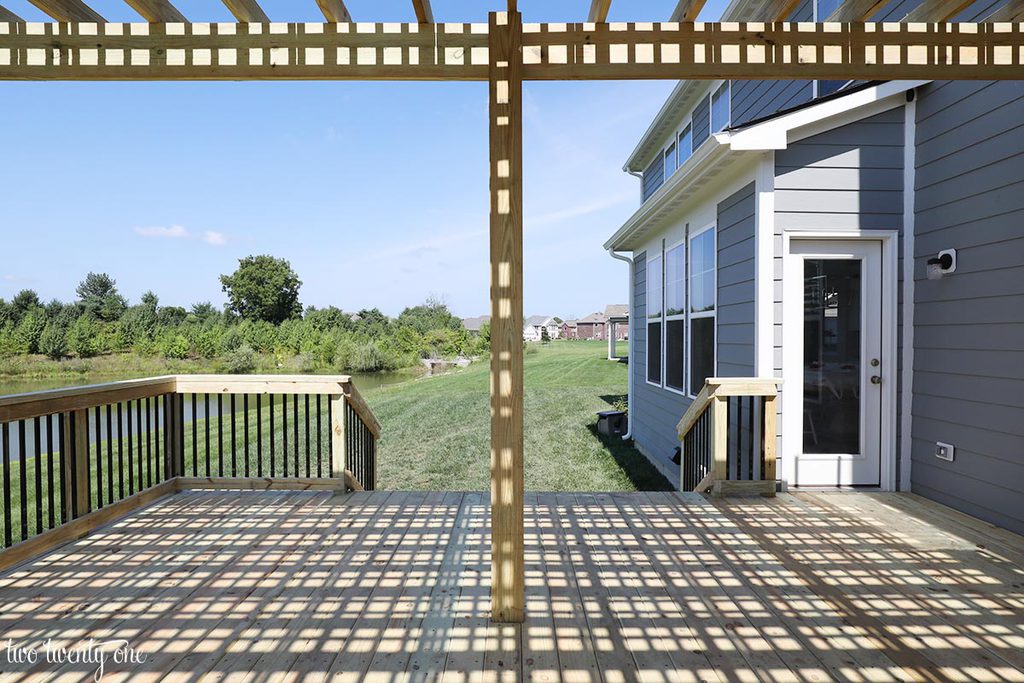 We haven’t gotten furniture yet, but the plan is to add either a sectional or couch and chairs to the side with the privacy screen. We’ll put a dining table and chairs on the other side of the deck under the pergola. 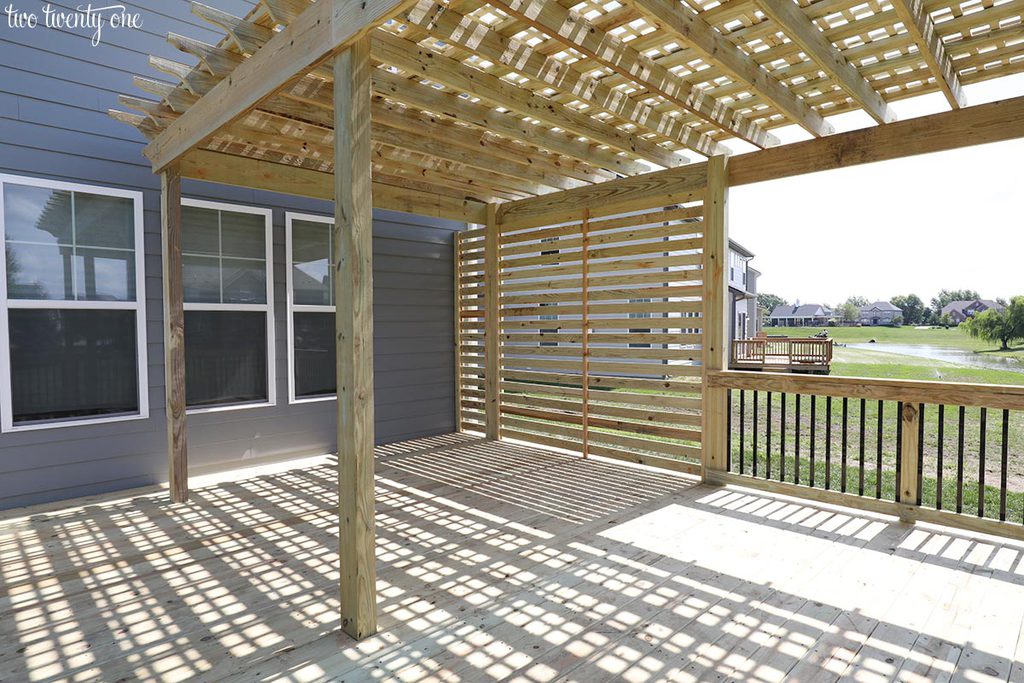 As the day progresses, we lose shade because the deck is on the south side of the house. The photo below was taken around 4PM. 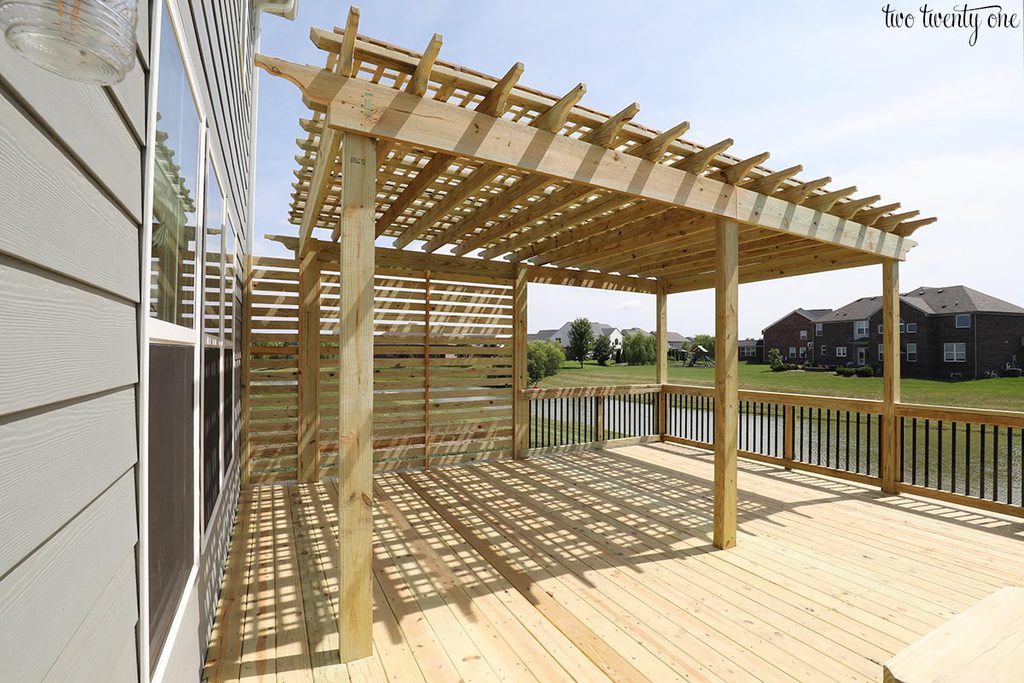 Our plan is to add some sort of shades on this side of the pergola to block the sun so we can enjoy dinner out on the deck without the sun blasting us in the face. 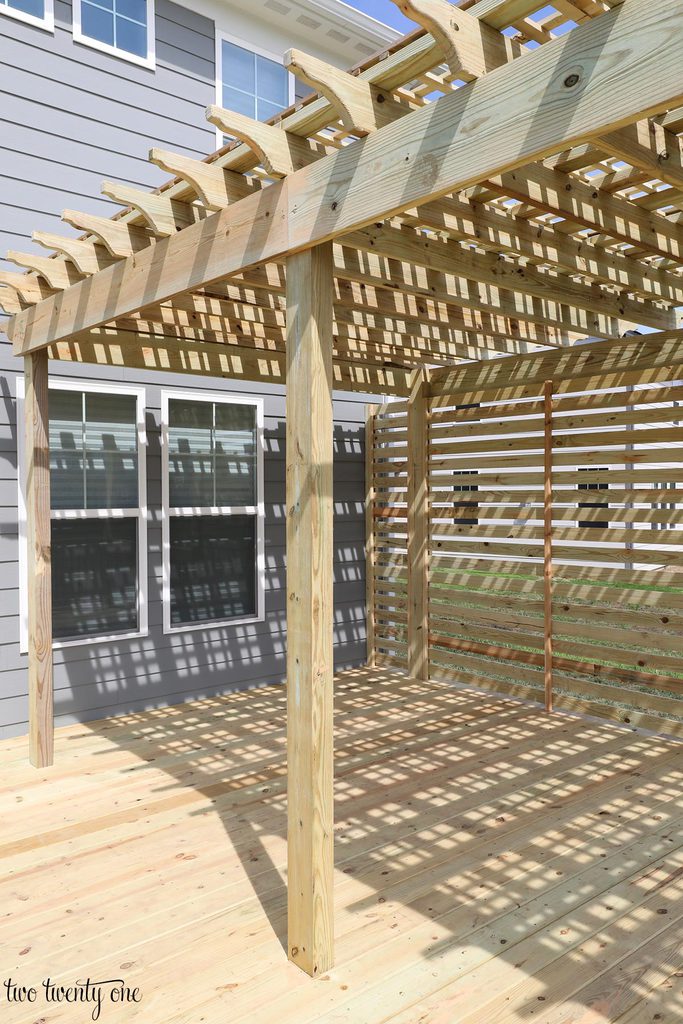 This was the very precise rendering I did on my phone. 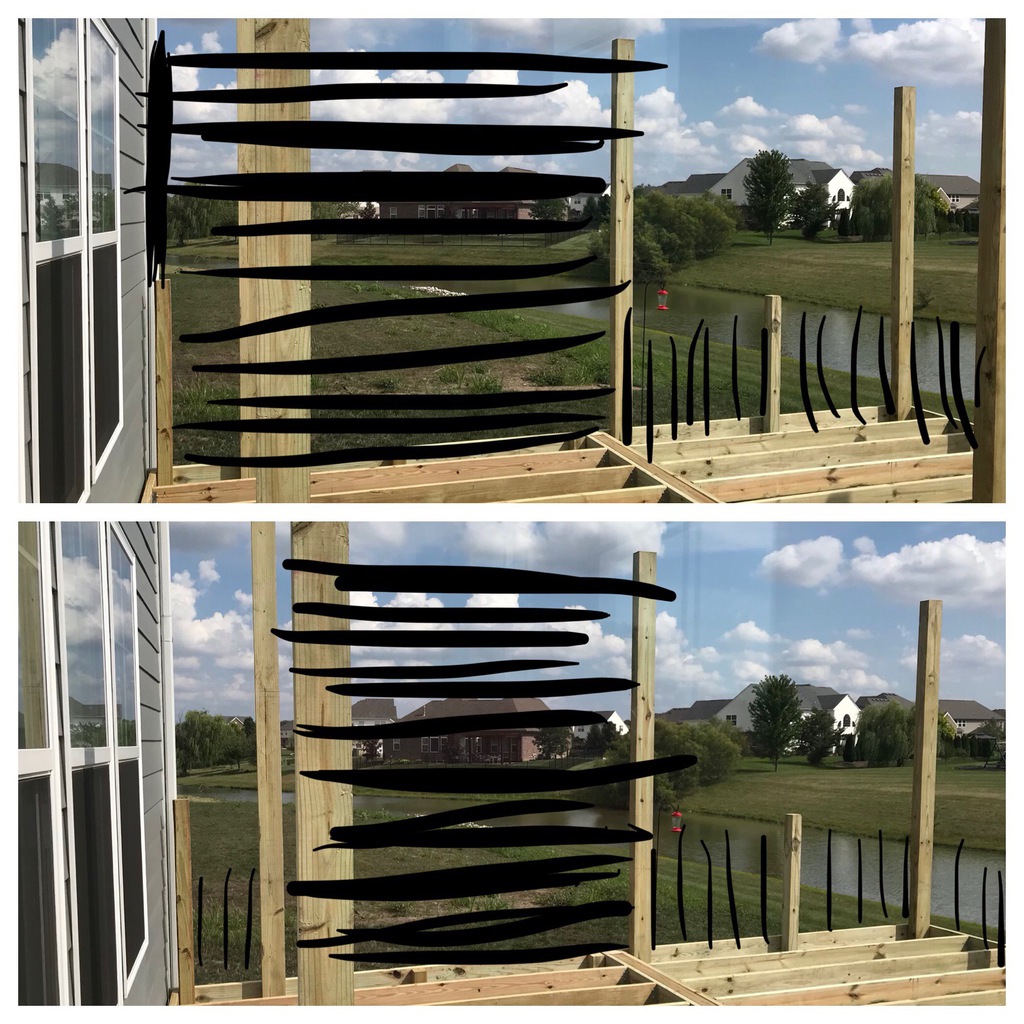 Bill agreed to do the small section of privacy screen. I’m very happy how it turned out. 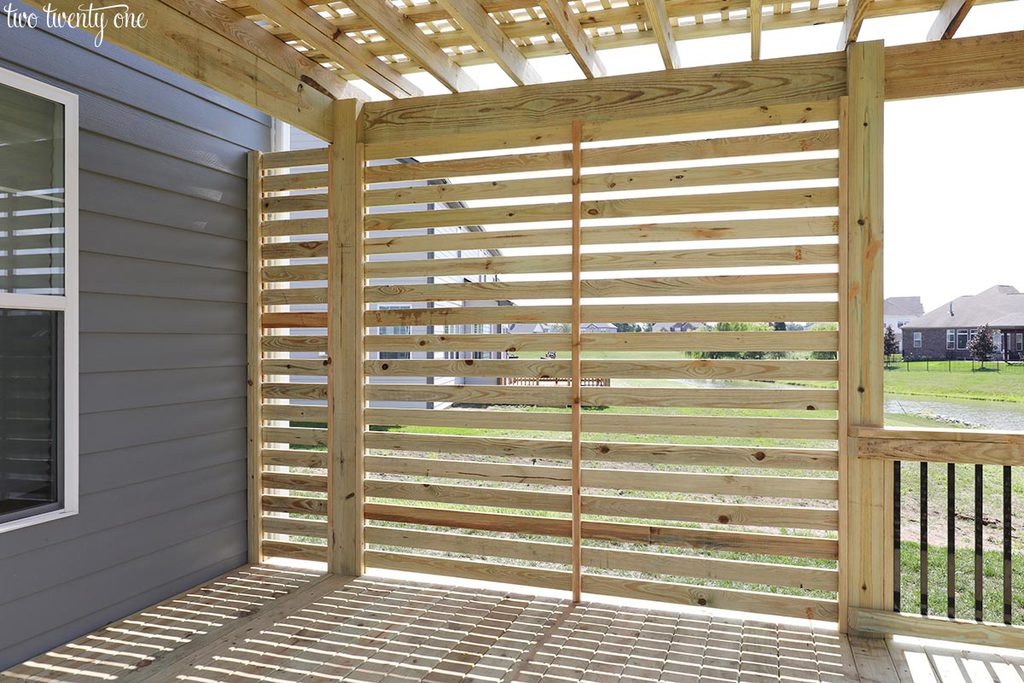 I wanted to go with these thinner black spindles so the view of the lake wouldn’t be as obstructed. They have a glossy finish, which I like. 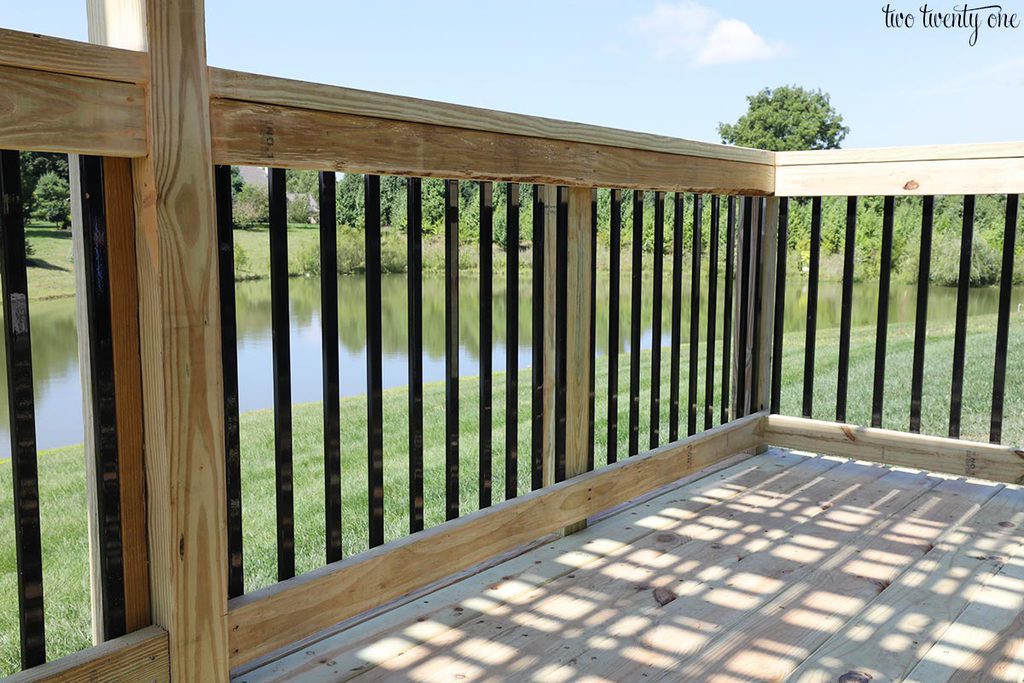 Since I love a good before and after, here are a couple of our view when we open the back door. 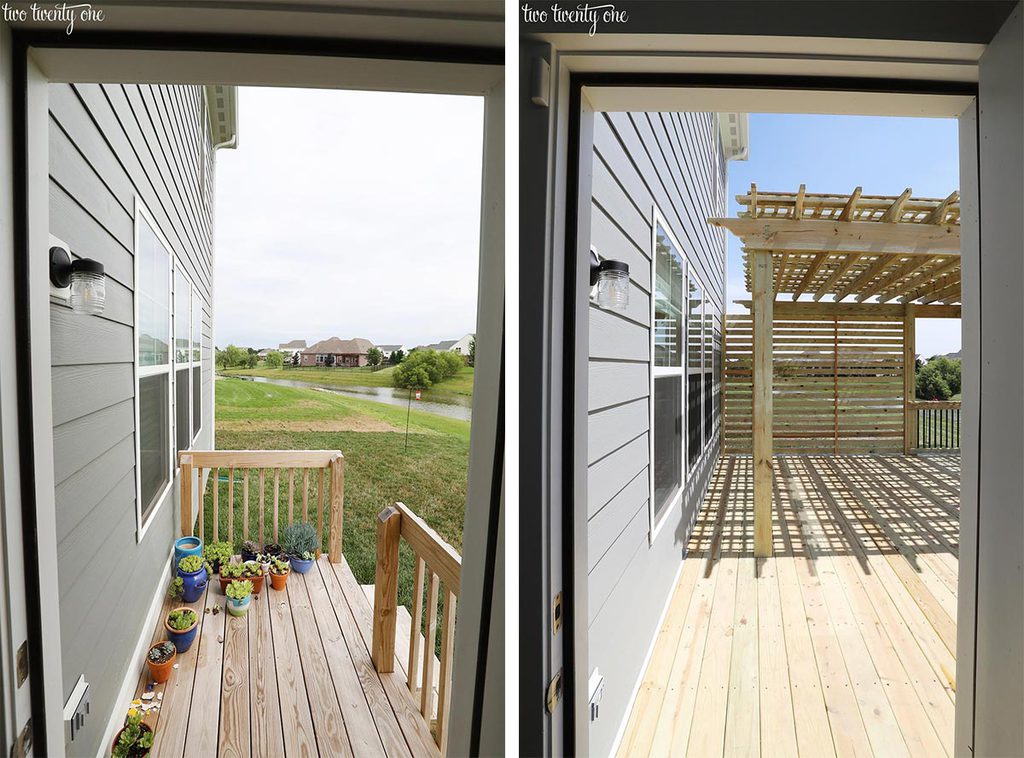 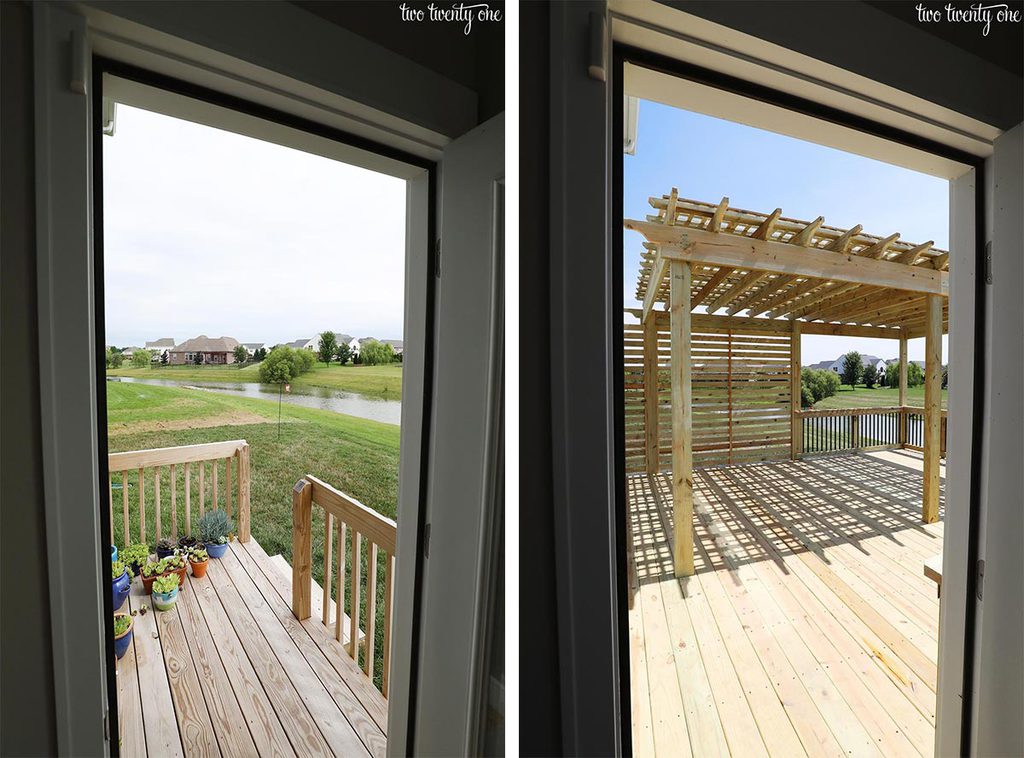 Check out this post to see what the deck looks like with all our furniture and plants on it!

And check out this post where I detail how we added shade to the deck and pergola so we can enjoy the space in the evening. 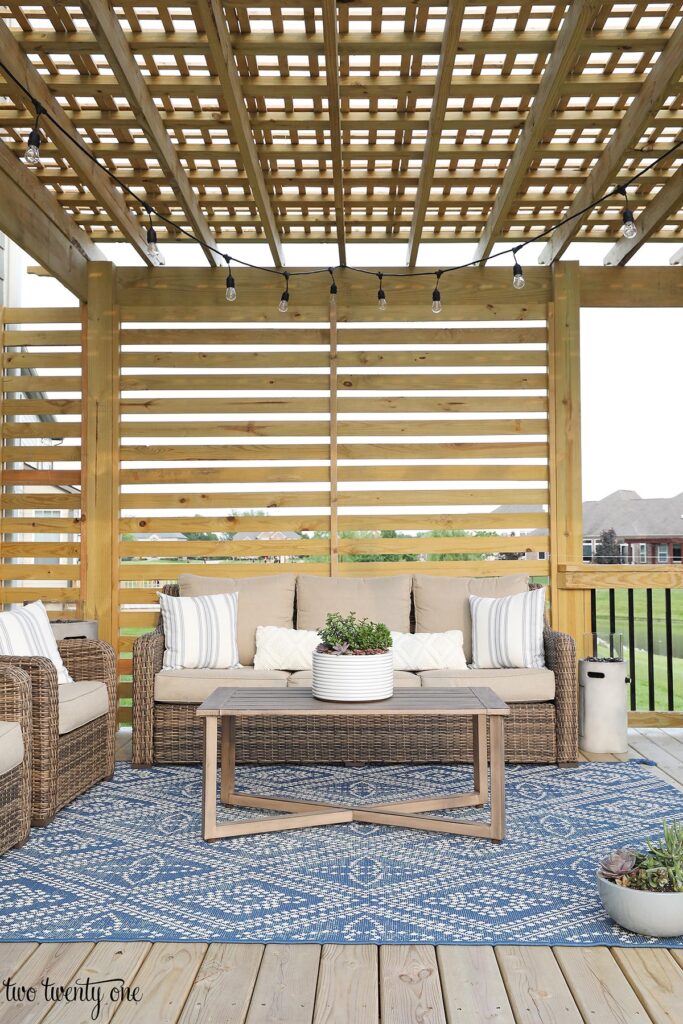 This may sound silly but considering our building history the past year and a half, it was a great feeling to work with a man who treated me with respect. And we were elated to have the deck and pergola built right the first time. It’s funny that this is how these types of things should go, but because of what we’ve gone through, we’re so appreciative when things turn out the way they should– if that makes sense. This experience restored my faith that there are quality contractors out there.

Brad and I can’t wait to sit out on the deck and enjoy gorgeous sunsets like these… with drinks in hand and children asleep in their beds. 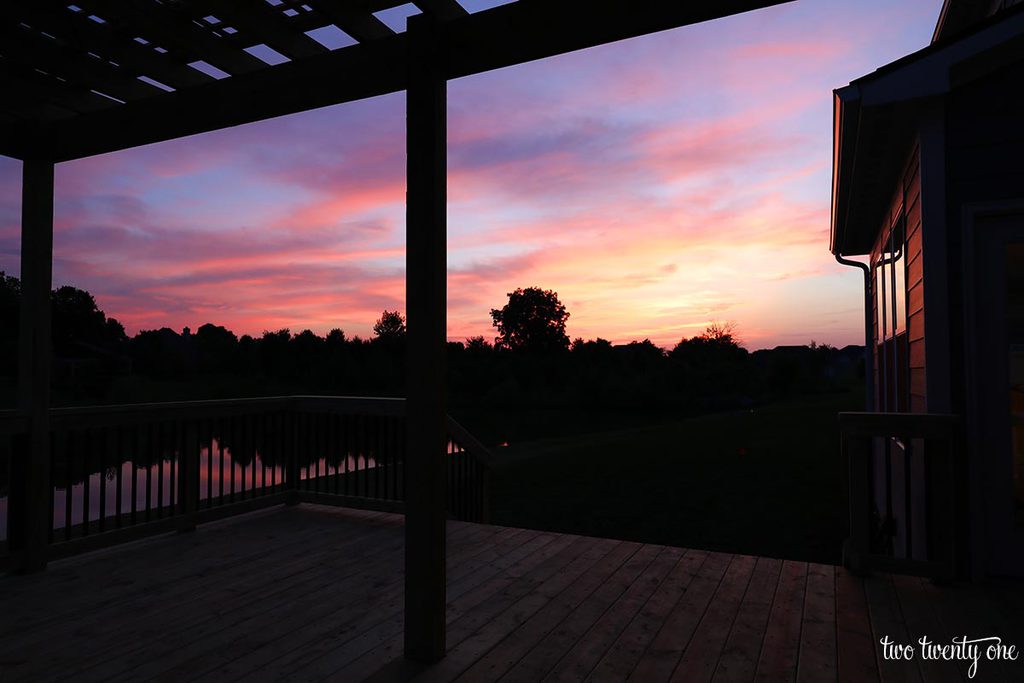 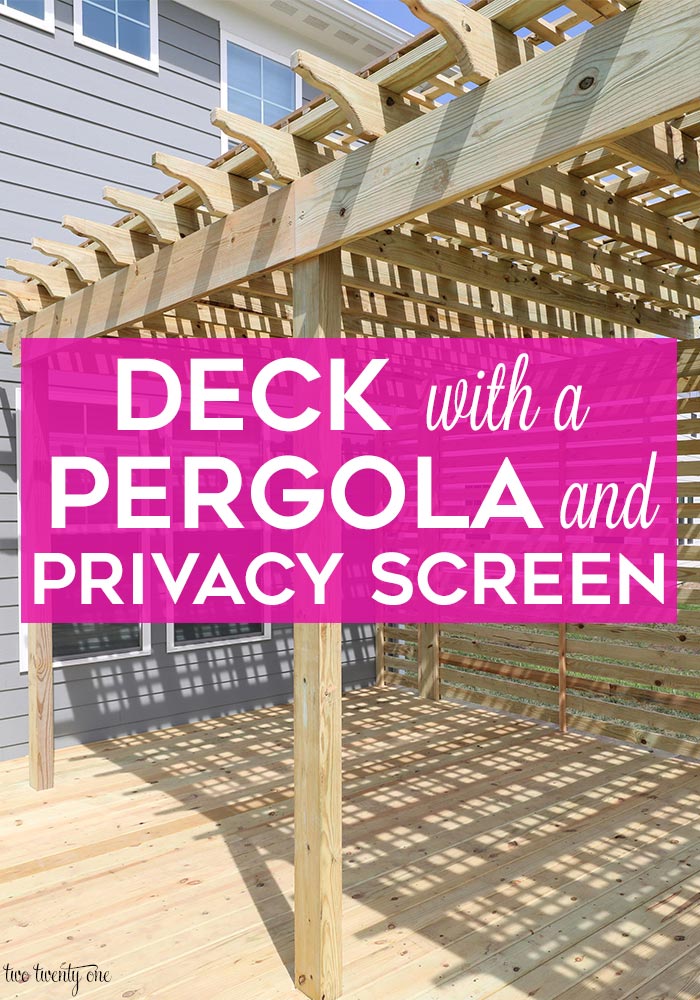 Get the latest DIY projects, organization ideas, tips & tricks and more delivered to your inbox!
Your information will *never* be shared or sold to a 3rd party.
« Baby Essentials
Great Wolf Lodge Gurnee »