Last month, we were invited up to the newly opened Great Wolf Lodge in Gurnee, Illinois north of Chicago. If you’re unfamiliar, there are 18 Great Wolf Lodges in the US. They’re family resorts with indoor waterparks and other fun activities for families. 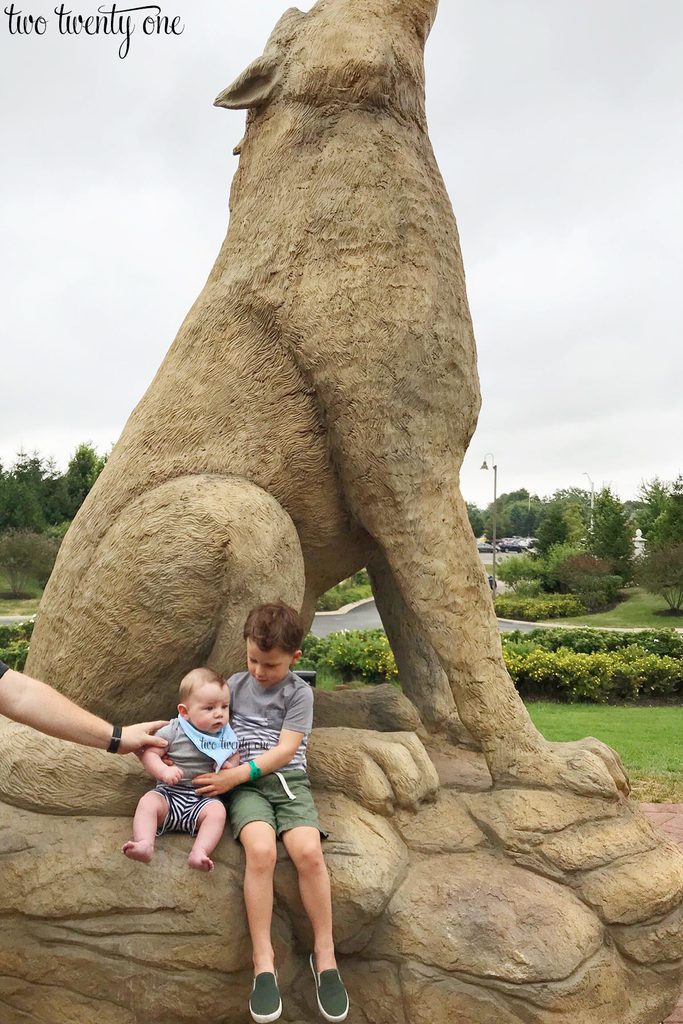 It was a bit of a hike for us from Indianapolis (5 hours) but the boys did really well in the car to and from Gurnee. 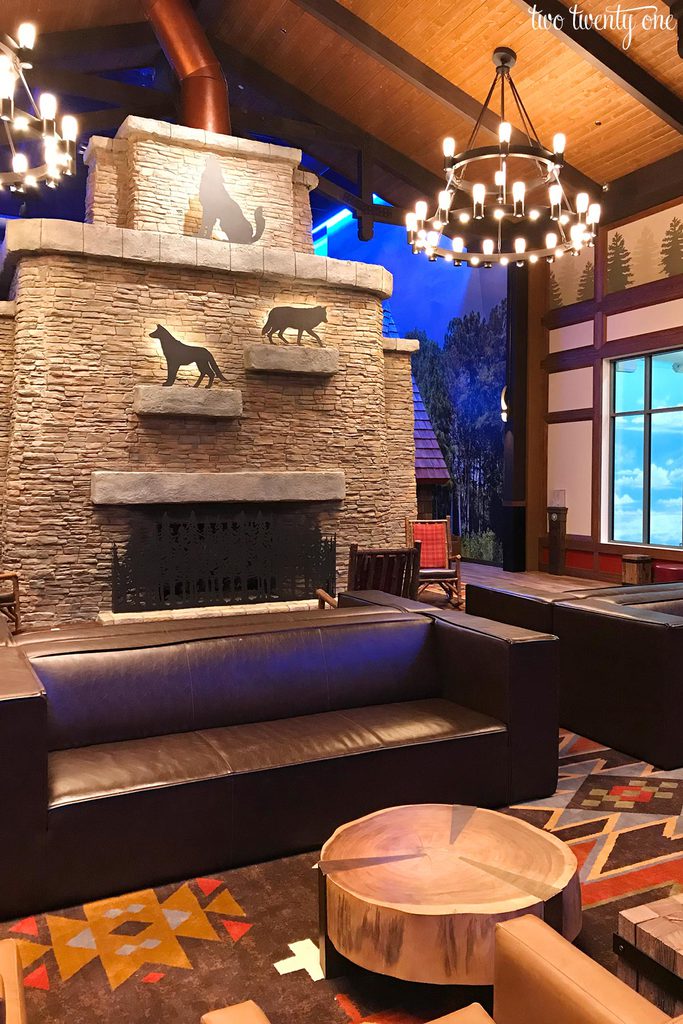 I’m not going to lie, it was nice enjoying the water without having to worry about slathering sunscreen on everyone throughout the day.

And for the record, I took the next two photos before the waterpark opened– I know I wouldn’t want anyone posting an obvious pic of me in my bathing suit on the Internets. 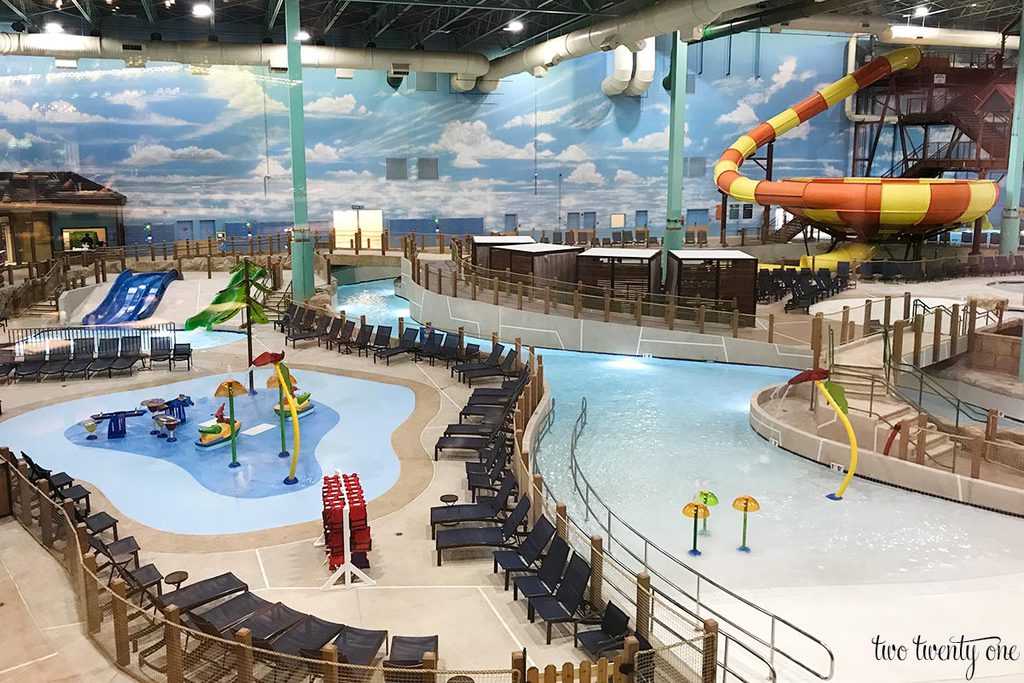 The waterpark is really clean and never felt crowded. There were always chairs open when we were there. 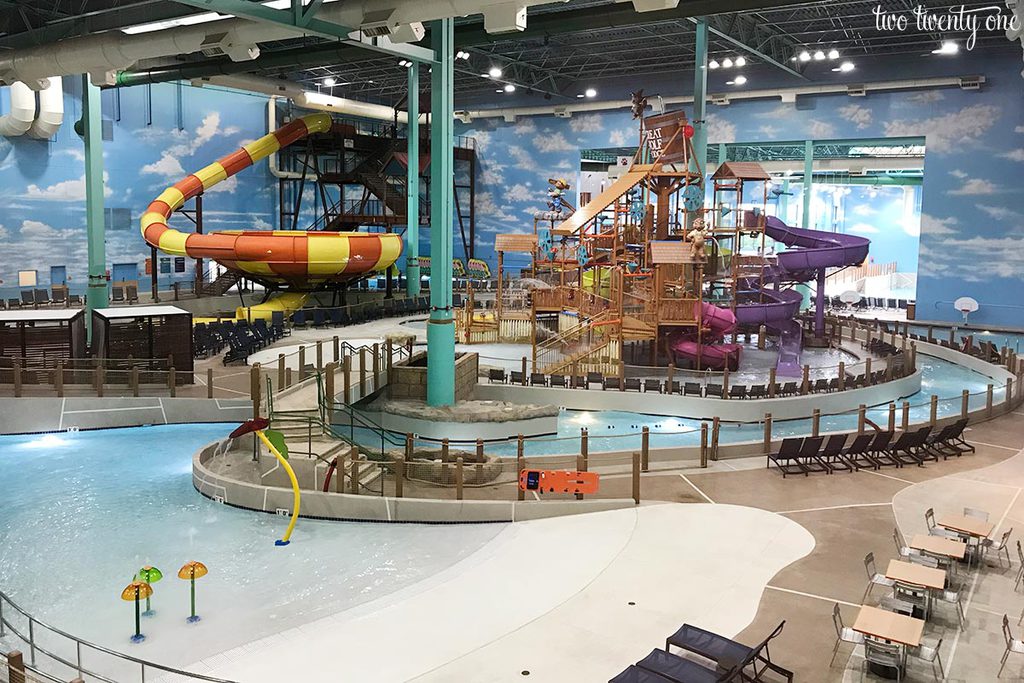 They have lifejackets available, but you can also bring your own Coast Guard-approved life jacket. And they’re staffed with lifeguards who’ve undergone extensive training in monitoring pools and operating rides. 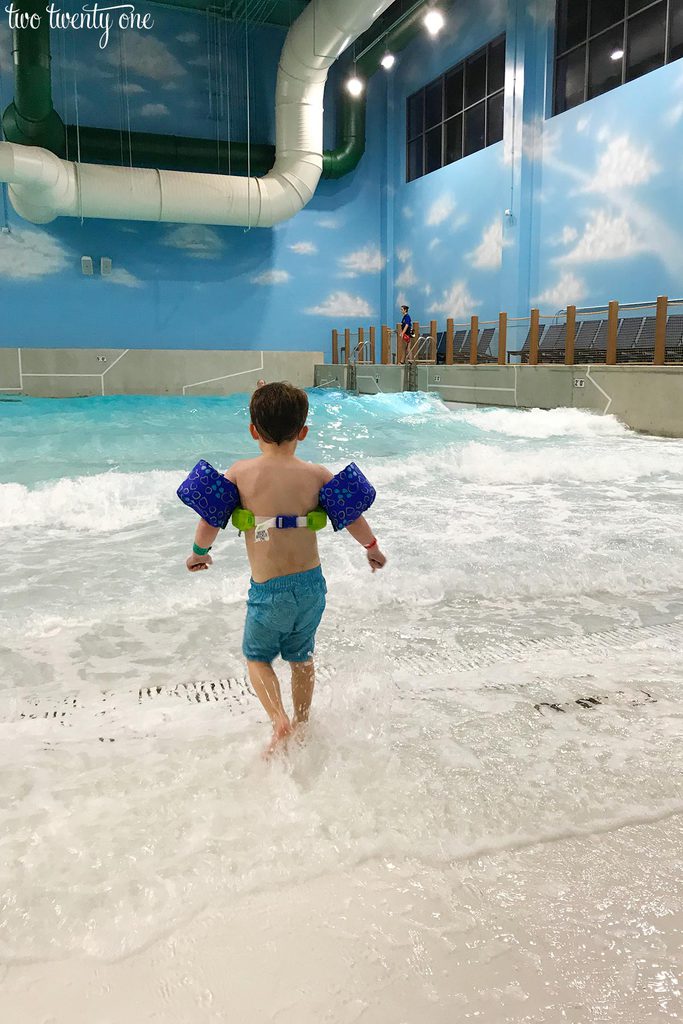 Owen’s favorite waterpark spot was Fort MacKenzie. He loved going down the various water slides, which surprised me because I went down a couple, and they’re fast. The wait for the Fort MacKenzie slides weren’t very long either. I think the most I ever saw lined up were 5-6 kids/people waiting on one slide.

Owen enjoyed making friends with kids his age and playing throughout the giant water fort. 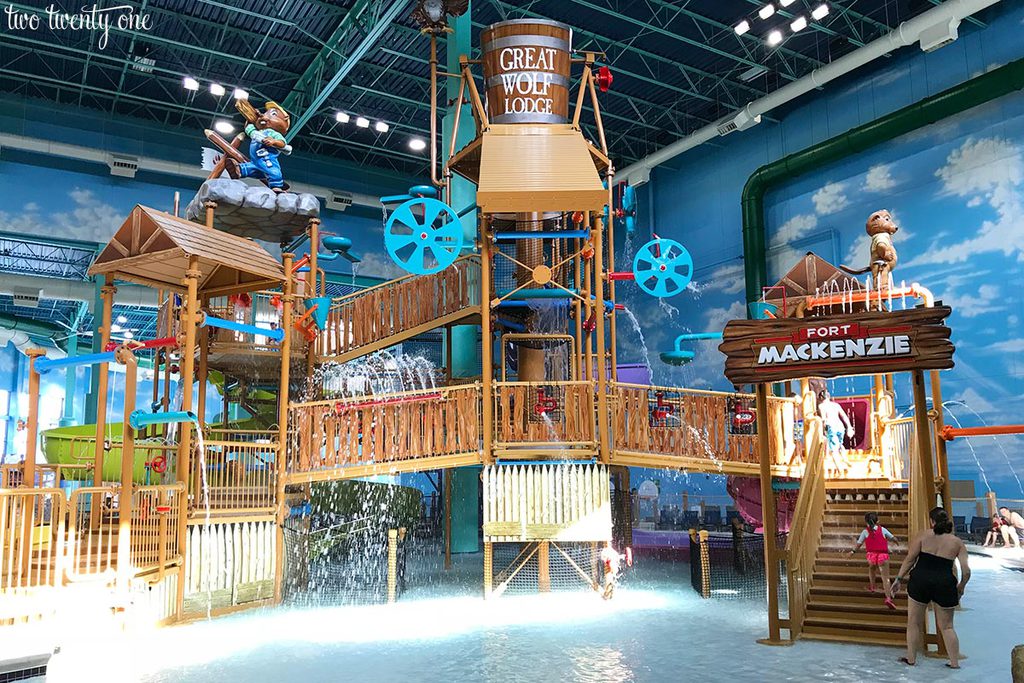 There’s plenty of dry-land activities for families to enjoy for additional fees. 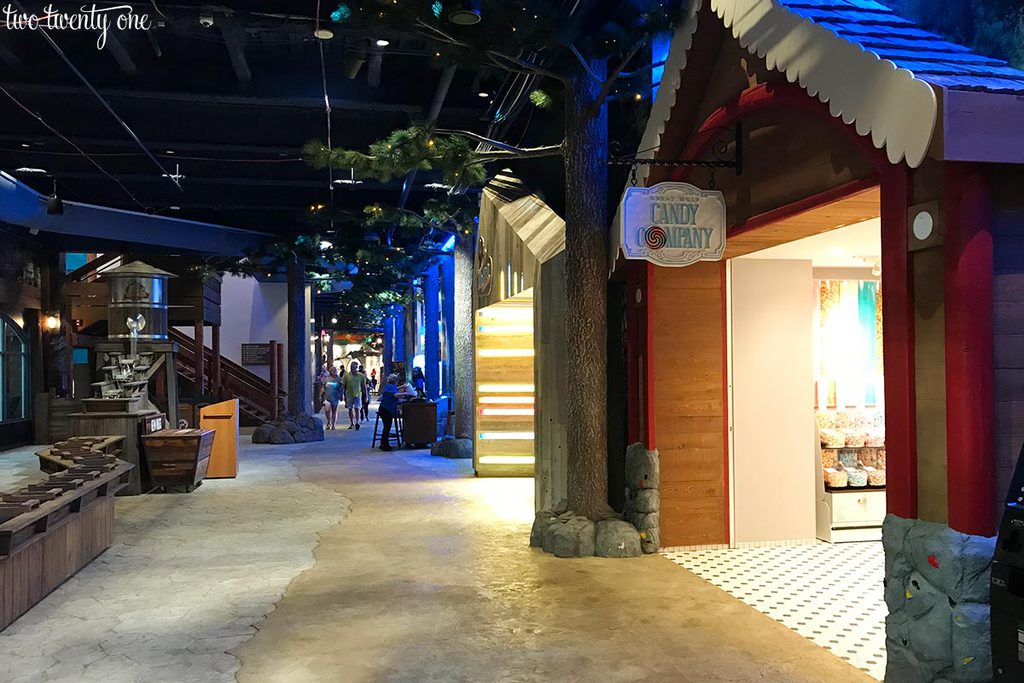 While we didn’t get a chance to try it out, there’s a smaller scale bowling alley for families to enjoy. 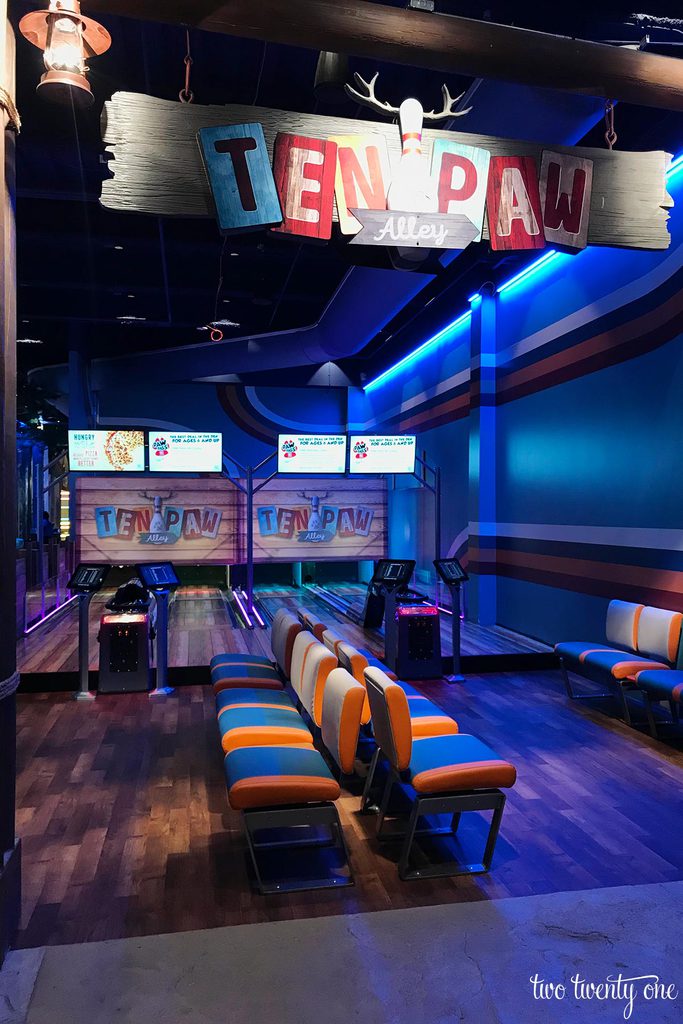 Owen wasn’t very engaged in MagiQuest (hello, 3.5 year old attention span), but we were always passing wand-carrying kids and adults in the hallways who were partaking in the live-action game. 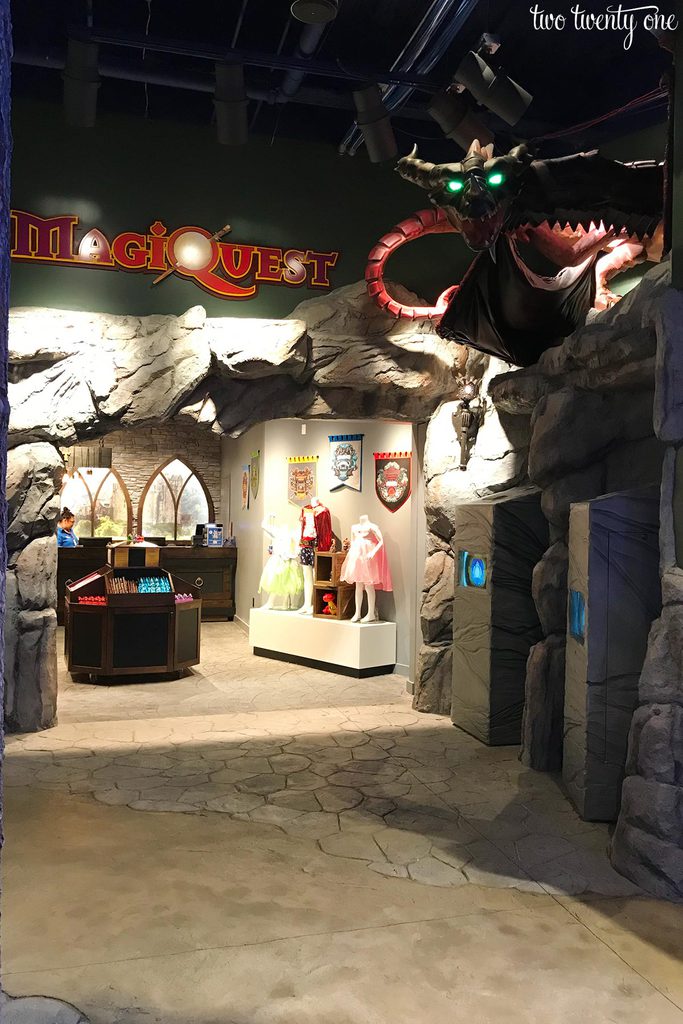 One of Owen’s favorite non-water activities was the Northern Lights Arcade. There were a lot of games that were preschooler-friendly. 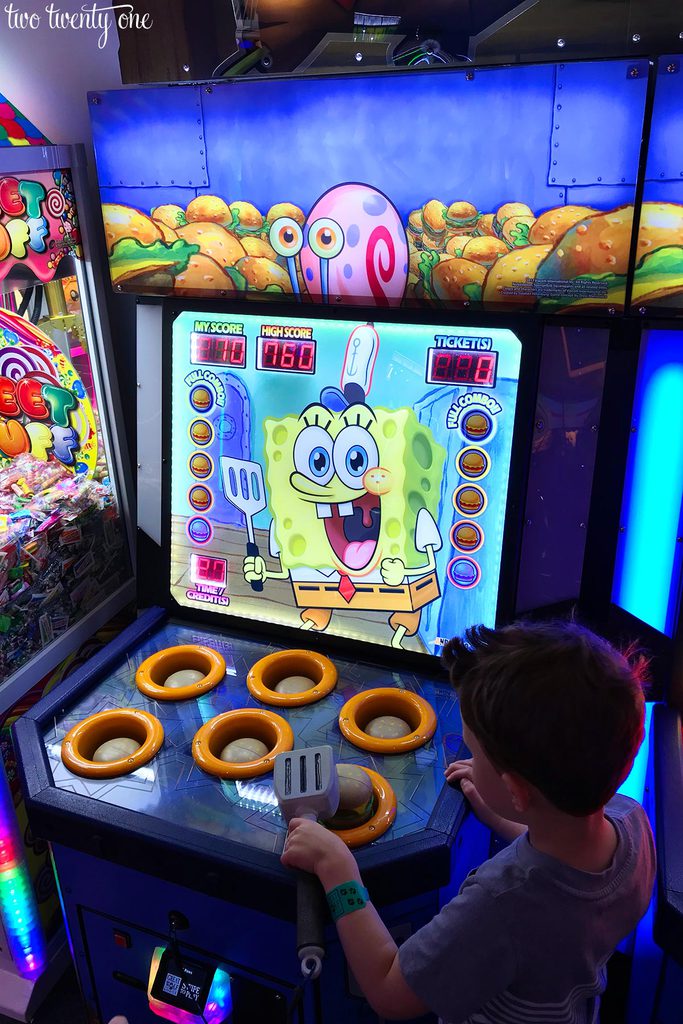 He also enjoyed panning and sifting for gemstones at Oliver’s Mining Co. 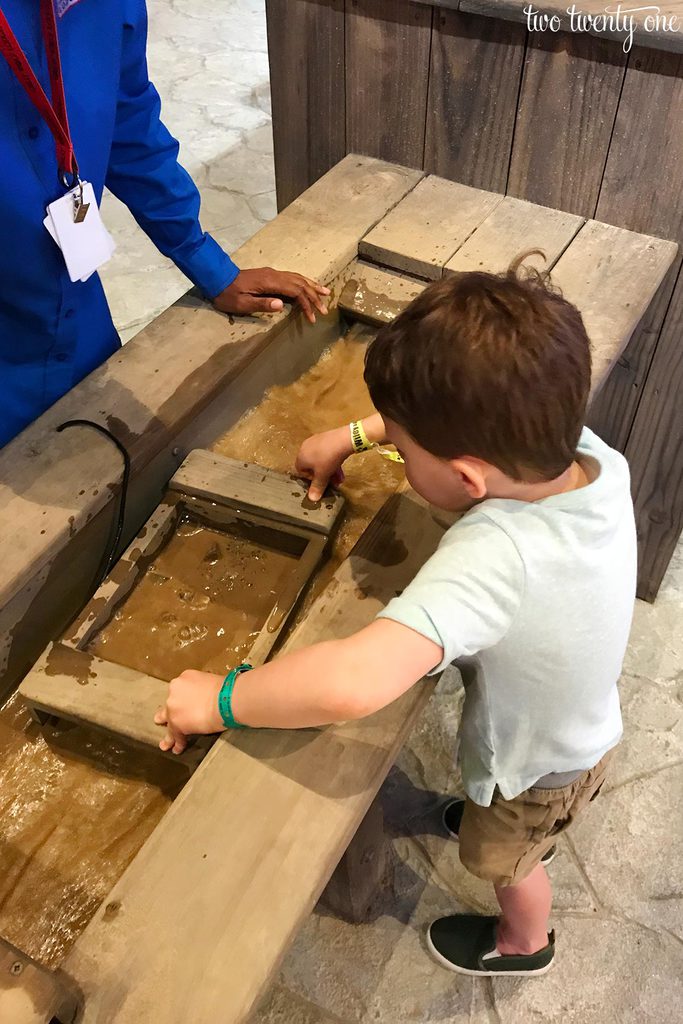 It also goes without saying that my child loved Great Wolf Candy Company. This kid would eat his weight in jellybeans if we let him. 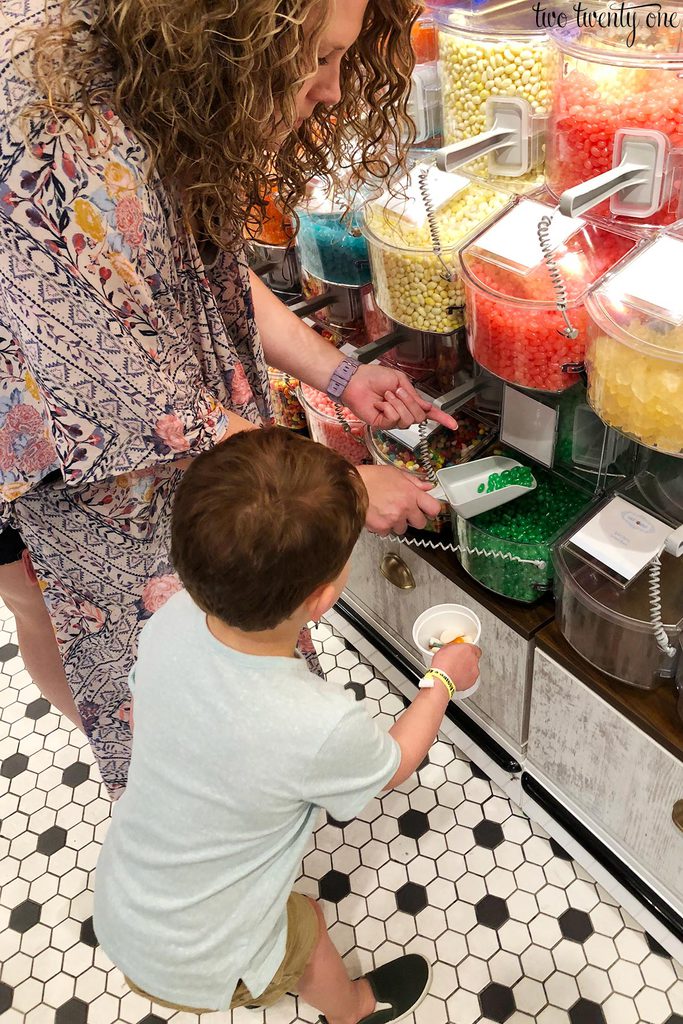 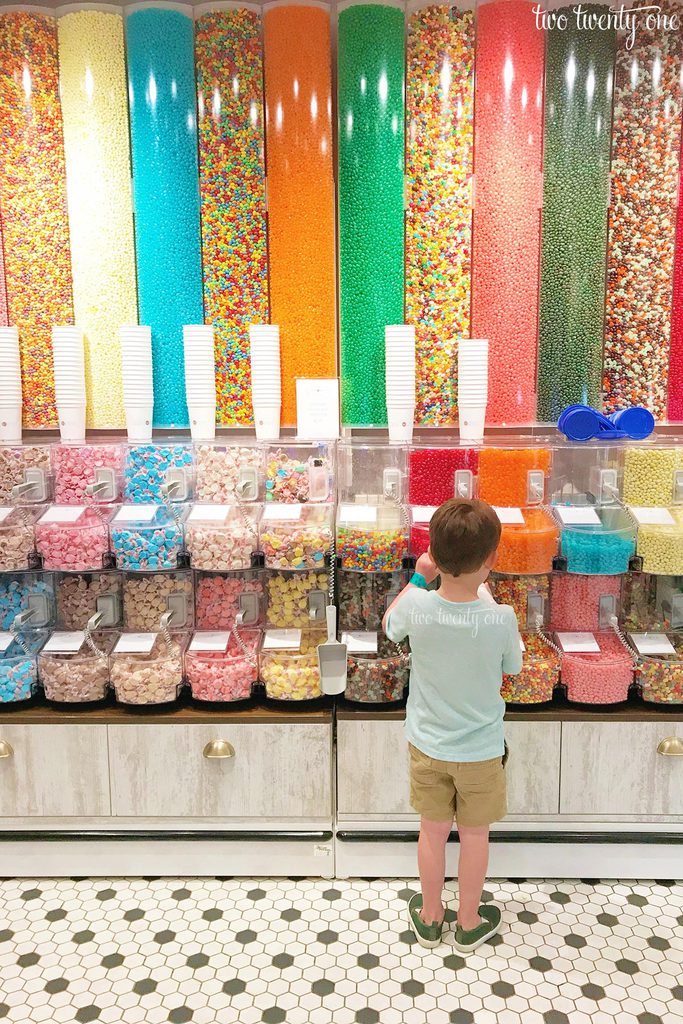 While his form and aim wasn’t the greatest, Owen enjoyed a round of putt putt at Howl in One. 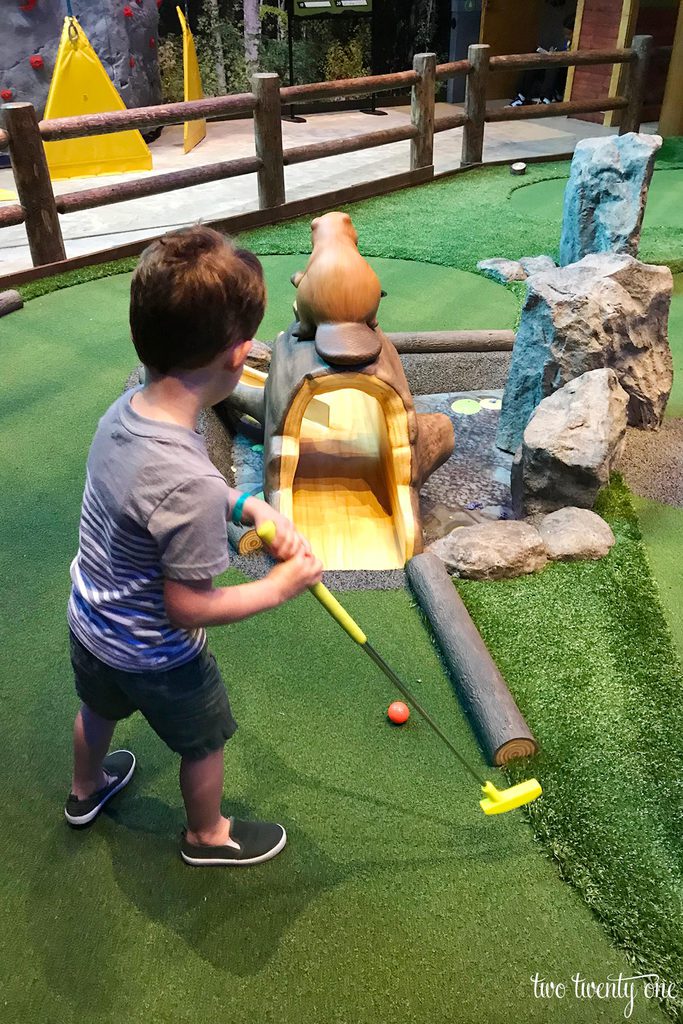 We all thought the Creation Station shop was so much fun. Kids get to create and keep their own fury friend. 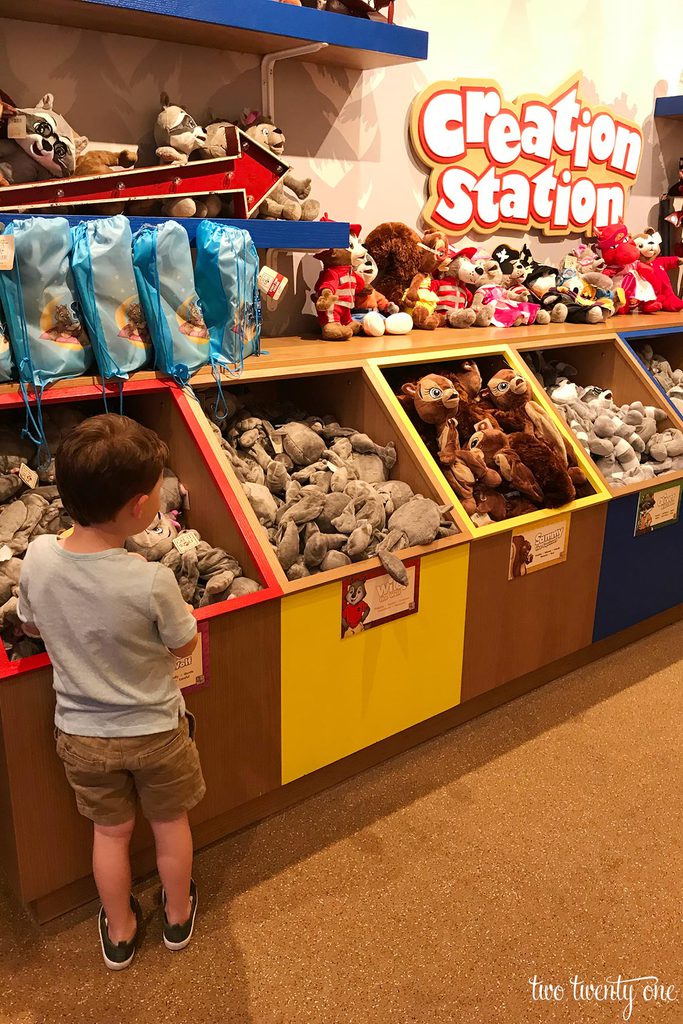 There’s 10 dining locations in Great Wolf Lodge Gurnee. During our stay, we ate at Campfire Kitchen, Barnwood, Hungry As A Wolf, Timbers Tacos, and Ben & Jerry’s. And all were great!

If you’re looking to save money on food, you can bring food with you. In the future, I’d probably bring easy breakfast (cereal/protein bars, yogurt, etc.), lunch (sandwich-making foods, pretzels, fruit, etc.), and snack foods for us to eat during the day, and then eat at one of the restaurants for dinner. There are fridges in the rooms, but I saw a lot of people taking coolers to their rooms as well. 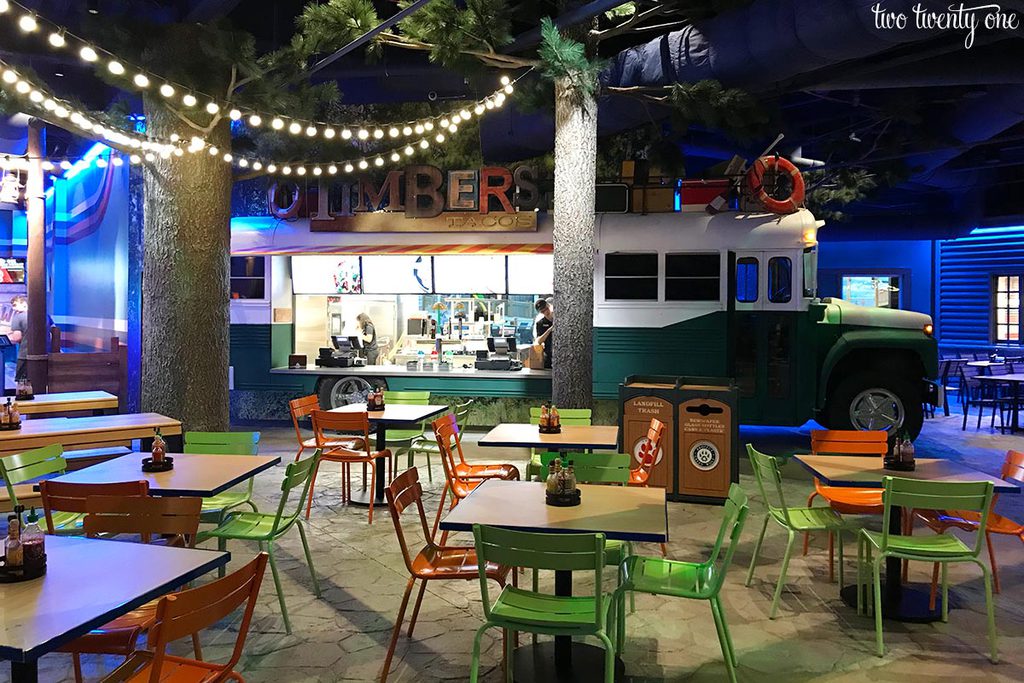 Our favorite restaurant was Timber Tacos. The chicken tacos were delicious, as were the nachos, which were massive– definitely enough for two people to share. And I’m proud to say Owen ate his very first churro during our stay at Great Wolf Lodge. Consequently, I had to fight him off from eating mine as well. 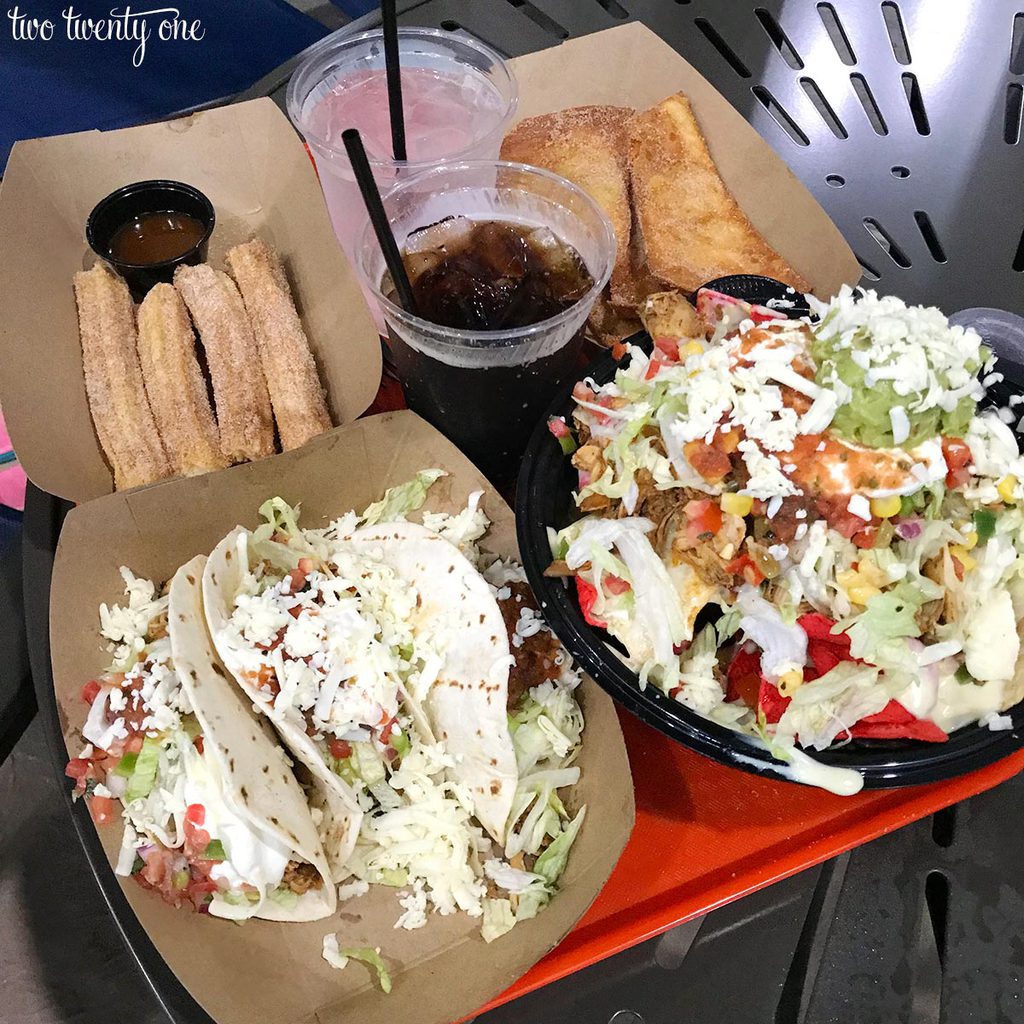 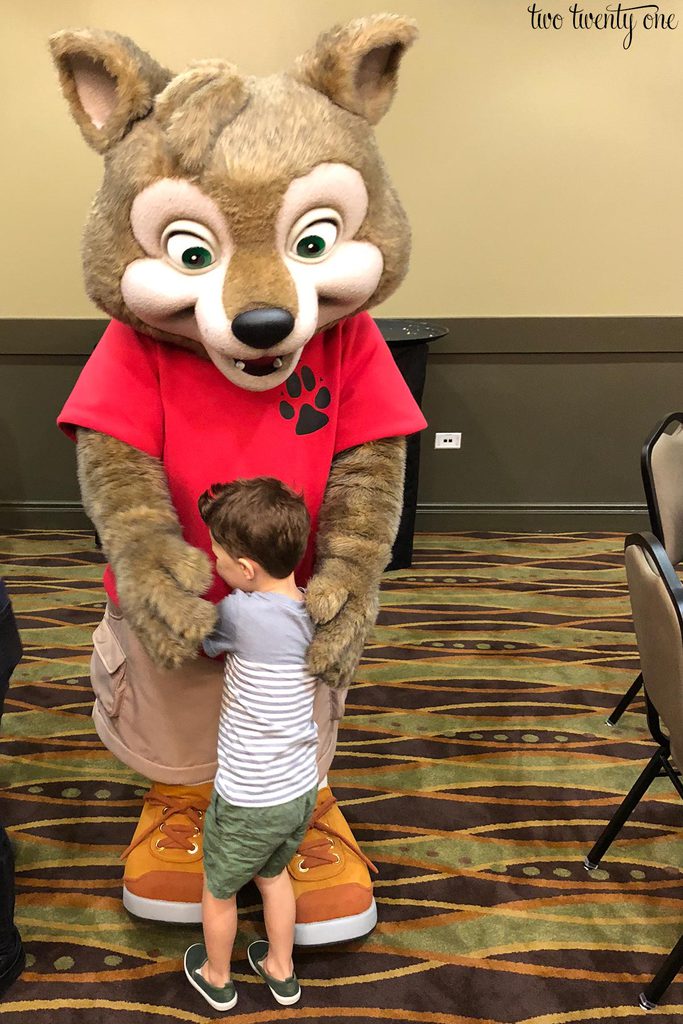 Every night there’s story time followed by a dance party to work the wiggles out before bed. 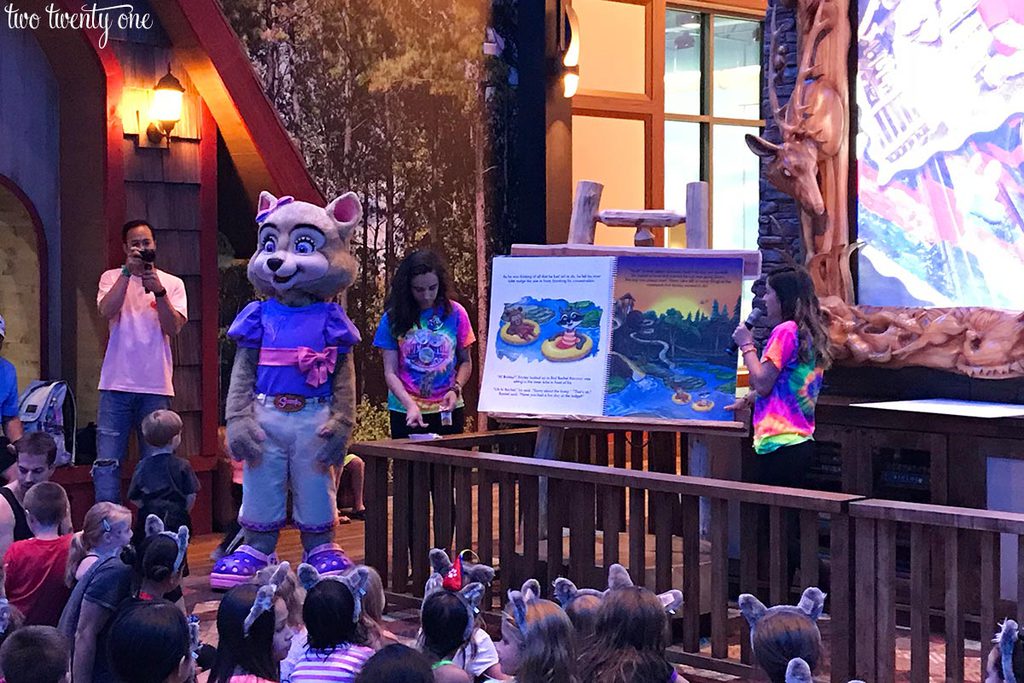 We really enjoyed our stay at Great Wolf Lodge Gurnee. I’d definitely recommend it for a weekend family getaway, especially if you have kids in the 5-10 age range.

We were given the opportunity to visit Great Wolf Lodge. As always, opinions are 100% my own.

Get the latest DIY projects, organization ideas, tips & tricks and more delivered to your inbox!
Your information will *never* be shared or sold to a 3rd party.
« Deck with Pergola Reveal
A Loft-y Makeover – Charly Sectional Sleeper Sofa Review »