139 shares
Hey, friends! Get excited because I have a room reveal for you today– the restroom you would use if you were to ever visit me. Our guest bathroom!
I know. Exciting, right?

Let’s start from the beginning. When we bought our house in 2009 the entire house was painted a shade of tan. The guest bathroom was one of the first rooms I painted. I went with a turquoise blue color (Crystal Sea by Valspar). It photographs more blue than blue/green. I had a black and white shower curtain with matching, and oh-so-stunning, tissue holder. Two black and white photographs I took were thrown on the wall, and I called it a day… for nearly 3 years. 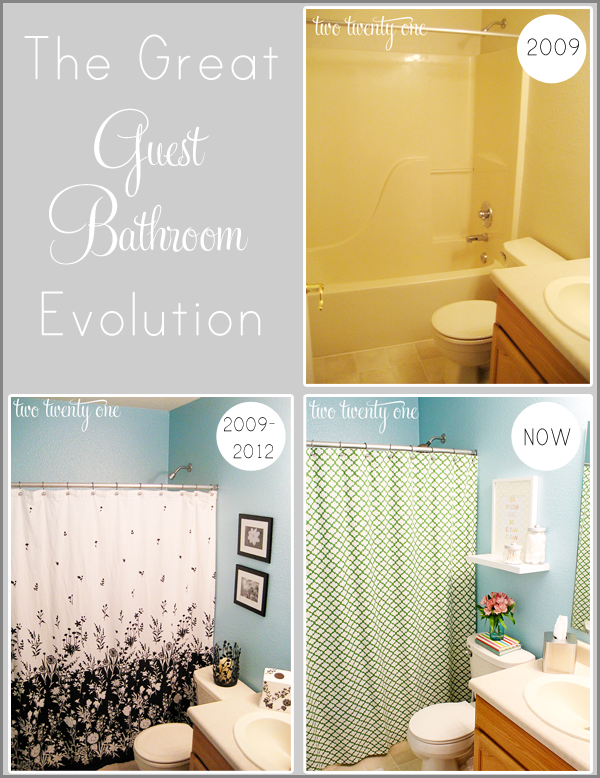 I’d been wanting to makeover the bathroom for a while, but I could never find a shower curtain that I loved. UNTIL, a fateful day at Goodwill Outlet. You may remember how I told you back in May in my Thrifting Tips and Tricks (Part Two) post that I scored an epic find while digging through those big blue bins.
That find? A shower curtain. When I first spotted it balled up in a bin, I thought, “Self, that’s a fun pattern. I wonder what that ball of fabric is.” Then I lifted it up and touched it. And I thought, “Self, this is quality fabric, and it’s a shower curtain. Nice.” I was curious and looked for a tag. I’m pretty sure my eyeballs bulged out of my pretty little head when I read the tag. 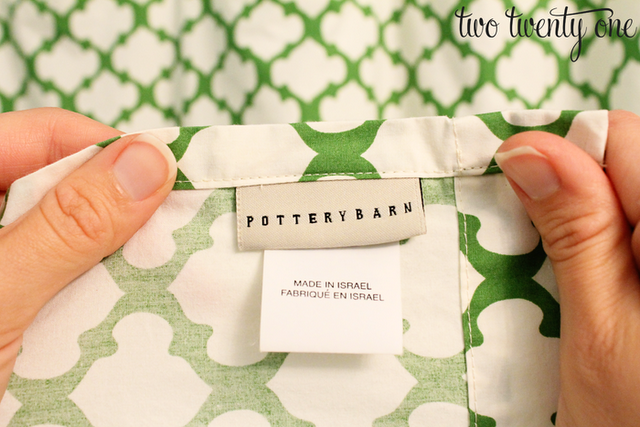 And I thought, “SELF! YOU FOUND A POTTERY BARN SHOWER CURTAIN AT GOODWILL OUTLET! GOODWILL OUTLET!” I shoved that shower curtain in my cart faster than you could say “Pottery Barn jacquard tile shower curtain for $.50”. Then I became paranoid, and I thought those around me would know about the treasure in my cart. But luckily no one tried to take it from me, but if they did, they would have had to pry it from my dead, lifeless fingers. Note: Keep in mind that I found the shower curtain at Goodwill OUTLET. It’s where you pay by the pound. It’s $.79 per pound for textiles. I bought the shower curtain with other things, so I don’t know exactly how much I paid for it. $.50 just sounded like a good amount because I doubt it weighs more than a pound. Also, note that I stopped shopping at all Goodwill stores in 2013. Read more about that here.
So I took the shower-curtain-find-of-the-decade as a sign, and the shower curtain became my inspiration for the bathroom restyle. I mean, who wouldn’t take that as a sign from the Goodwill Gods? 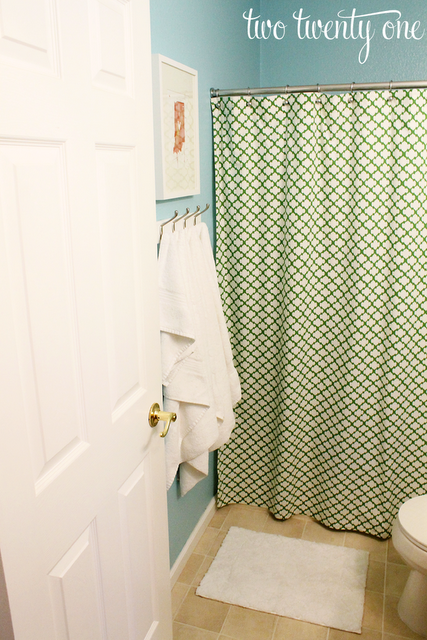 We removed the old towel rack. Seriously, could the previous owners have chosen an uglier towel rack? Don’t answer that. I’m sure there are uglier ones out there. 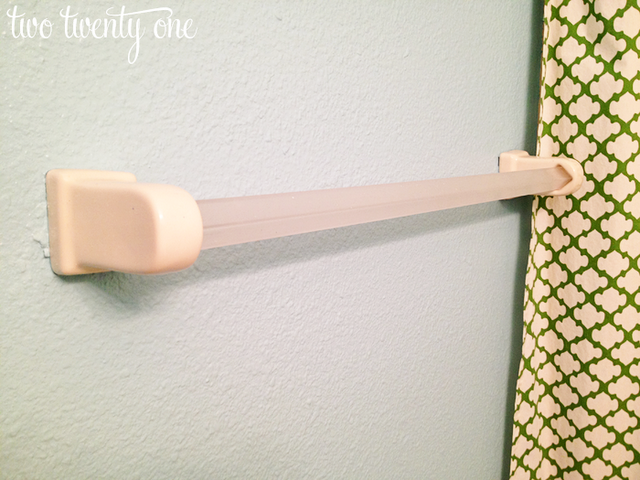 We put up a new one, which is actually a coat rack. Works for us our guests. 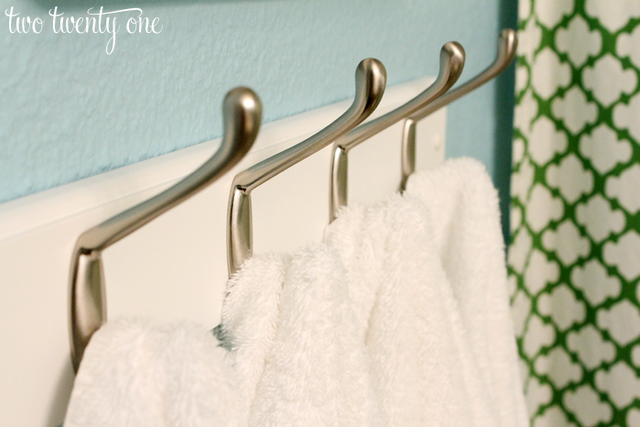 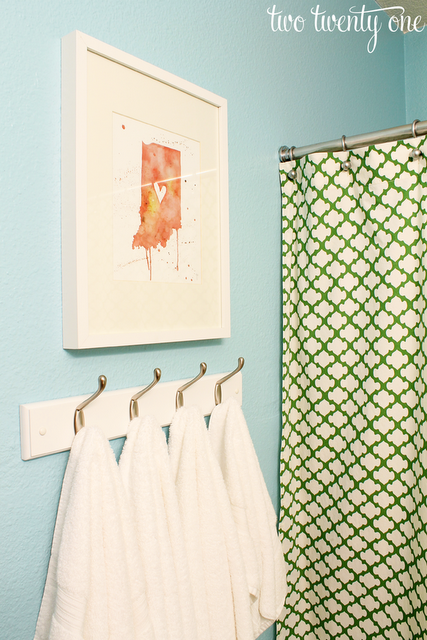 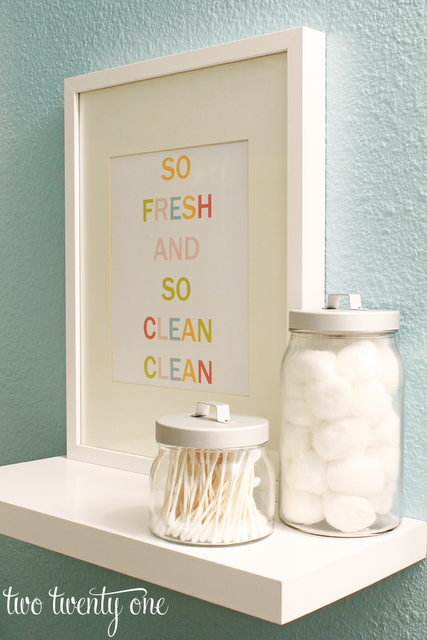 Who wants to sit on a boring toilet? Not I. So I jazzed it up with some colorful and intriguing books (tutorial here) and a blogger must– a blue Mason jar with pretty flowers. 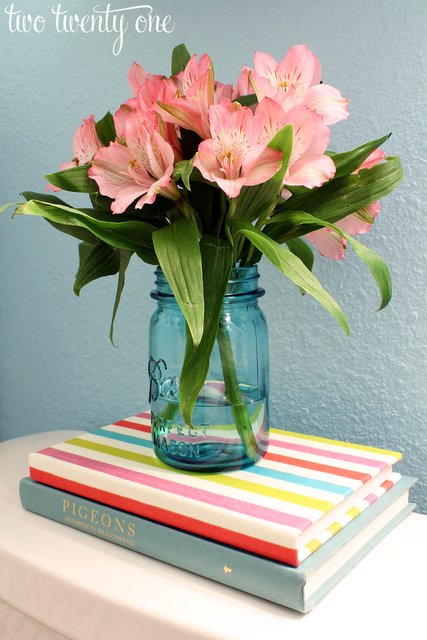 That’s one beautiful commode if I do say so myself. 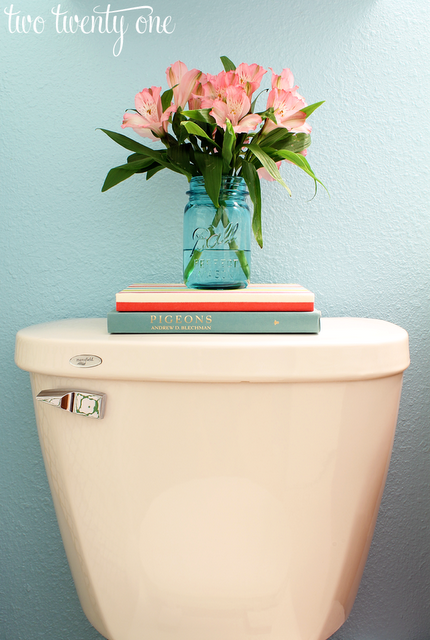 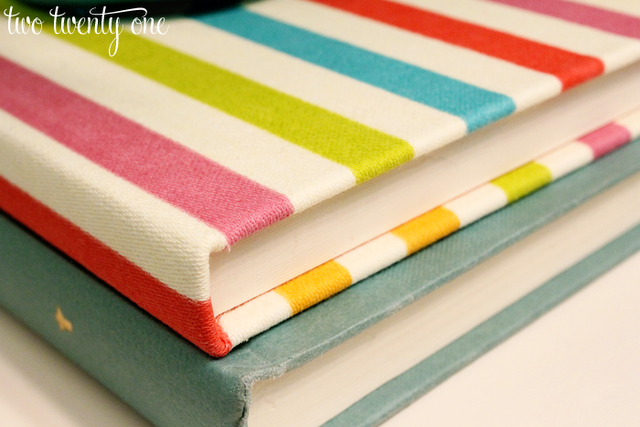 Eventually, I’d like to paint the vanity. The honey oak just doesn’t do anything for me. The flooring will remain vinyl faux tile. We’re in a recession, people. So please don’t suggest that we change that. Because it’s not happening.

Click here for the full details on this restyle, like how much cheddar we dropped, and where we purchased everything. Transparency: it’s a good thing.

Click here to get the So Fresh, So Clean printable! Read how I stock our guest bathroom here!

What are your thoughts on the makeover?
Have you ever found something while thrifting that you almost peed yourself you were so excited?
Is Outkast’s “So Fresh, So Clean” stuck in your head now? Don’t worry. You’re not alone.

Get the latest DIY projects, organization ideas, tips & tricks and more delivered to your inbox!
Your information will *never* be shared or sold to a 3rd party.
« How to Make a Topiary {DIY}
Guest Bathroom Makeover Shopping List »