About two years Brad had been suffering big time from some sort of allergies for a couple years. But we couldn’t put our fingers on it because it was a year-round thing, not a seasonal thing. After I pestered him for months he finally made an appointment with an allergist (mostly because I found the allergist and sent Brad the phone number so he had no excuse not to make an appointment). Before he went to the appointment I jokingly said, “Wouldn’t it be funny if you were allergic to the dog?”

Brad went to the doctor and they performed an allergy skin test on his back, testing him for around 50 allergies.

The results: he’s allergic to several types of mold and dogs. 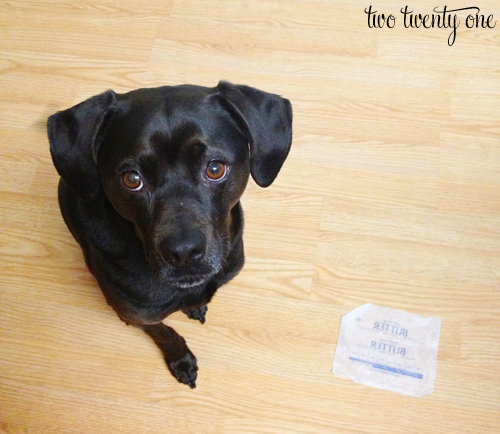 In case you or someone you know is allergic to dogs, I thought I’d share some things we’ve done to help alleviate Brad’s symptoms.

1. Kick your dog out of your bedroom.

One of the first questions Brad’s allergist asked him was if Jack sleeps in bed with us. The answer to that has always been a big fat NOPE because I couldn’t do that. And that was a good decision because that would’ve been like sleeping with the enemy. However, Jack has always slept in his crate in our bedroom. Brad’s doctor recommended locating Jack’s crate to another room but we felt like we couldn’t do that to him after having him in our room for 6.5 years. But Jack has also always slept with a blanket or sheet over his kennel so I feel like that helps keep his hair and dander somewhat contained.

We try to vacuum at least twice a week to keep the pet dander and hair down in our house. We also wash Jack’s bedding and the blanket we cover his crate with often. About 6 months ago we invested in a new vacuum because our old hand-me-down finally bit the dust. Getting this new vacuum with an anti-allergen complete seal has made a huge difference. 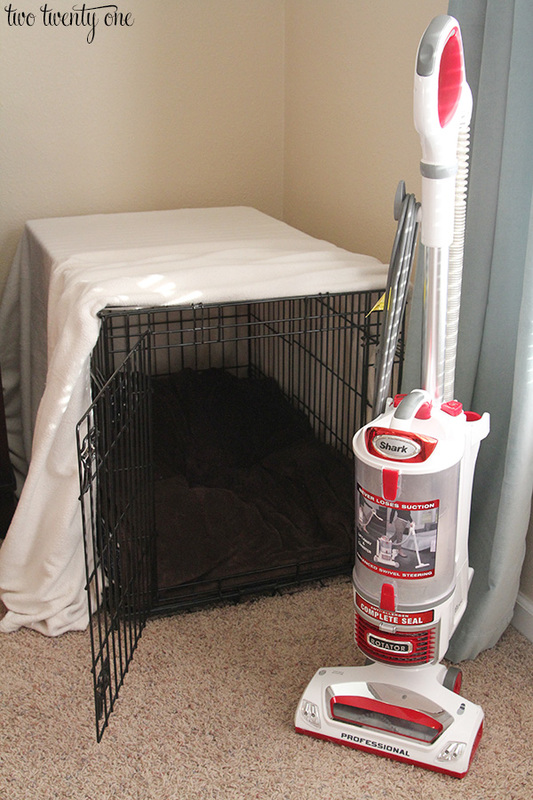 Brad’s allergist also recommended getting an air cleaner for our bedroom. We never pulled the trigger on one, but a friend of ours has this one and he swears by it.

4. Reduce the carpeting in your home, especially the bedroom.

All of the bedrooms, closets, and our great room have carpet. And carpet holds on to allergens more than hard surface floors like wood, laminate, and tile. I’ve told Brad multiple times I’d be fine with ditching the carpet in our bedroom and great room if that would help with him symptoms. But apparently he’s a delicate flower because he told me he didn’t like the idea of his feet touching cold flooring when getting out of bed in the morning. To which I replied, “Uh, there’s these things called ‘slippers’.” He still hasn’t taken me up on my offer.

We take Jack to the groomer once a month for a bath and to get his nails trimmed. We gave up bathing him a couple years ago because it was like wrestling a, well, 40 pound dog that doesn’t enjoy being bathed. Our entire bathroom would end up being covered in black hair so we’d have to clean all the hair up after giving him a bath.

We use the FURminator® deShedding tool on Jack once a week. Doing so removes loose hair and undercoat without damaging Jack’s coat or cutting his skin. While it’s known that people aren’t allergic to dog hair, dog allergens travel on dog hair. By reducing the amount of hair that’s going to fall off of Jack anyway, we’re reducing the amount of allergens in our house. We always use the FURminator® tool on Jack either outside on our back patio or in our garage. Just a reminder that the non-allergic pet owner should groom the pet to reduce exposure to the allergens.

People have asked me if Jack likes being groomed with FURminator® tools, and the answer is yes. I’m guessing it feels like a pretty good back scratch because he’ll sit and stay until we’re done. 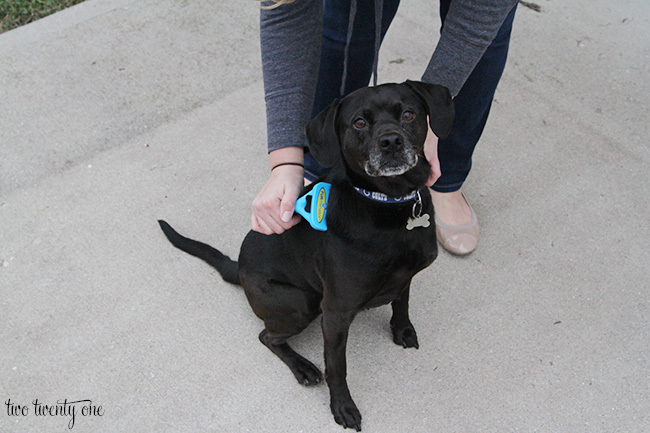 We have the FURFlex™ system, which is available at PetSmart. It comes with a handle that works with interchangeable heads. So if you use multiple tools, you only have to buy the heads and then snap them onto the handle. It’s a great option for multiple pet homes or if you use multiple grooming heads for one pet.

We typically start with the deShedding head, on the left, and finish up with the dual slicker brush head, on the right, which helps smooth the coat out and remove mats.

Seriously, look at all of that hair that would’ve been in our house. 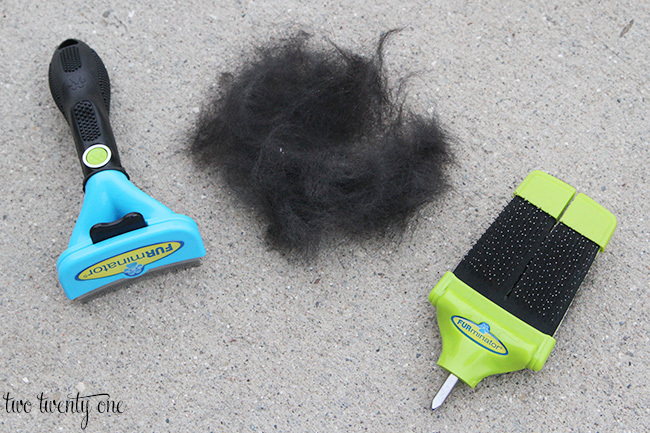 Instead of throwing the hair away, we leave it outside for the birds to pick it up and use it in their nests. The circle of hair.

7. Reduce the amount of soft surfaces in your home or clean them often.

A year ago we bought leather couches for two reasons: Jack and Owen. We knew Jack’s hair wouldn’t stick to a leather couch like it did to our former upholstered couches. And we guessed that Jack wouldn’t want to lay on leather because it’s not as comfy as fabric. We also figured that leather would be a little more kid friendly. Our assumption was confirmed when 5 month old Owen spit up all over the couch and cleaning it up was 10 times easier because the couch was leather.

We know that Jack’s hair still probably makes it way onto our couches so we vacuum them every other week or so.

For quick fixes, like on our two chair that Jack sometimes jumps up on to get a better view of the squirrel that likes to go in our backyard and taunt him, we use the FUR Accumulator head, which easily snaps onto the FURFlex™ handle. 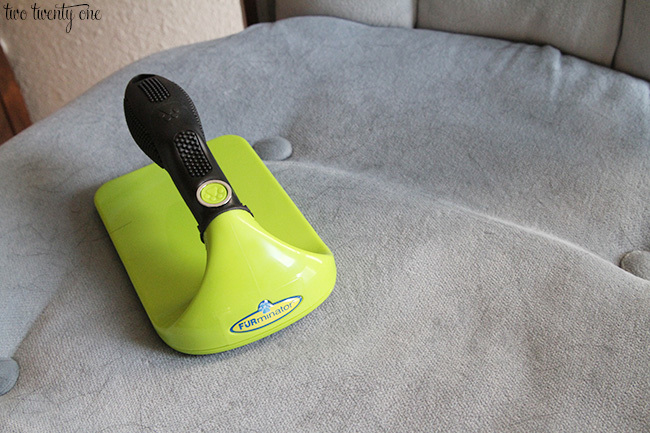 Here’s a little before and after shot. 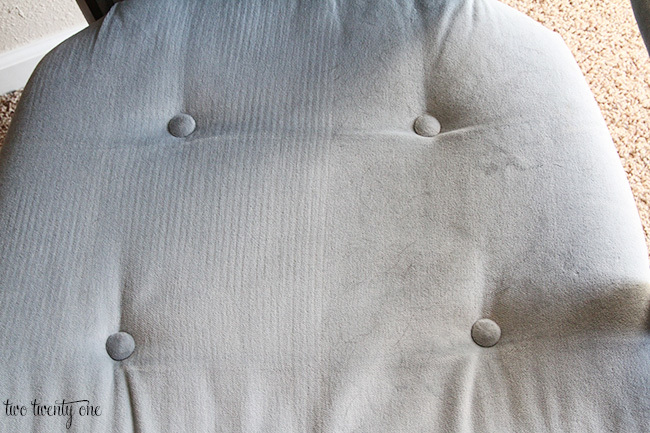 I’m happy to report that by doing these things with the combination of allergy shots and medicine, Brad is feeling a lot better. His allergist said that he should be mostly symptom-free in a couple years if Brad continues with the shots.

You can more info on FURminator® products here:

This is a sponsored post written by me on behalf of FURminator® Professional Pet Care Products. As always, all opinions are my own.

Get the latest DIY projects, organization ideas, tips & tricks and more delivered to your inbox!
Your information will *never* be shared or sold to a 3rd party.
« That Was Fast
I’m Lovin’ #7 »