When I was putting together this gift guide for him, I texted my best friend and told her it was going to be kind of tough because girls don’t have as many hardcore hobbies as guys.

Girls just like shiny stuff. Only I didn’t use the word ‘stuff’.

I was obviously overgeneralizing. But, come on, it’s mostly tru– Oh look, a metallic stapler!

So I rounded up some cool gifts that I think most guys would like in case you’re stumped on what to get your football loving, guitar playing, car freak of a significant other for Valentine’s Day.

1. mug
Nothing says ‘I love you’ quite like a Ron Swanson mug that references a meat tornado. I actually got this mug for Brad for Christmas, and he loves it. If your man isn’t into Parks and Rec, there are other awesome mugs from this shop, so check them out. You can also treat yo self with one of the other mugs I love like the ‘Help Me. I’m poor.’ mug.

3. beer cap map
You save your wine corks. He saves his beer caps. He might as well display all of them on a beer cap map. This particular company offers 10 countries and all 50 states.

4. bluetooth shower speaker
If he’s going to sing in the shower, why not provide him with some tunes? This speaker also acts as an extension of his phone so now he’ll never have an excuse for not answering your call while he’s in the shower. Plus, it’s less than $12.

6. unzipped hand-blown glass bowl
Because what guy wouldn’t want this awesomeness on his desk at work? If he’s eating healthy, he can always put raisins in it.

7. drone
A lot of guys I know are obsessed with drones right now. I think it’s mostly because they like flying them indoors and scaring the crap out of their wives. So, on second thought, you might not want to get this for your husband. Or if you do, tell him you reserve the right to go on a Target shopping spree each time he flies it indoors.

8. scratch off map
The perfect man cave wall art– a scratch off map. You scratch off the destinations you’ve traveled to. So it’s like a giant lotto ticket, only he paid money to go to those locations.

9. travel mug
Because a travel mug is practical. And he’s probably always misplacing his.

10. cufflinks
There’s like 5,000 different styles of cufflinks. I liked these shift gear cufflinks because Brad is a car guy. But you could always get your man whatever type of cufflink that fits his interests. Seriously, there’s collegiate cufflinks, Trekkie cufflinks, superhero cufflinks, monogram cufflinks…

11. tile
Is he always saying “Where’s my keys?” or “Where’s my wallet?” If so, get him tile. It’s a little, well, tile that attaches to his keychain or can be slipped into his wallet. You locate the item by sound, by seeing its last known location on a map, or by marking it as ‘lost’ and getting an alert when it’s found. This might be a great gift for you, too.

I forgot to include photos of this travel kit, in case your spouse tends to travel with his toiletries in Ziploc baggies, and this cool magnetic bottle opener and cap catcher.

I’m teaming up with some amazing bloggers for a Valentine’s Day Holiday Hop. Plus, we’re each giving away some awesome gift cards. I’m giving away a $25 Target gift card below so you can treat yo self.

Take some time to check out some of the awesome stuff they’re sharing today! 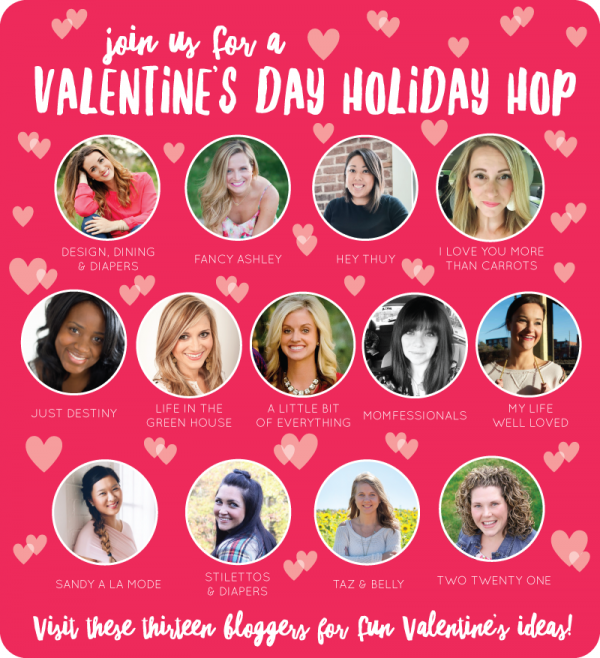 This post contains affiliate links.
Funds from affiliates help pay for web hosting, domain registration, email delivery, the occasional bottle of wine, and other fees to keep twotwentyone.net up and running. Thanks for your support! I appreciate it!

Get the latest DIY projects, organization ideas, tips & tricks and more delivered to your inbox!
Your information will *never* be shared or sold to a 3rd party.
« How to Hide Bedside Cords
Master Bedroom Paint Samples »