This is my honest overview and review of the Samsung 4-Door Flex fridge. I originally wrote this overview in December 2015. After owning the fridge for 4 years, I’ve posted an update on the fridge at the bottom of this post, so be sure to read that. 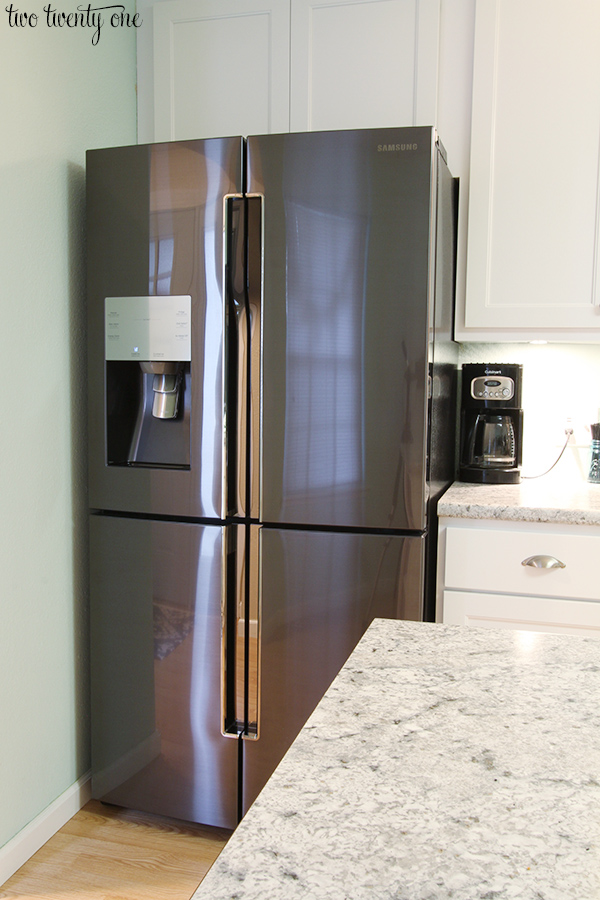 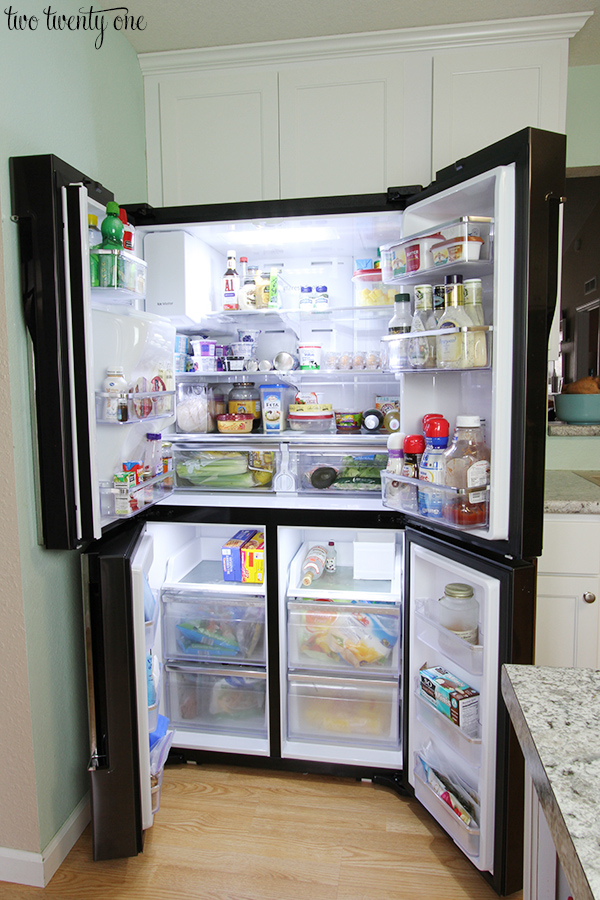 Top of the Fridge

The top portion of the fridge is the refrigerator, which is different from our old standard fridge where the freezer was on the top. I’ll say that it’s a lot nice seeing everything at eye level now instead of having to crouch down. 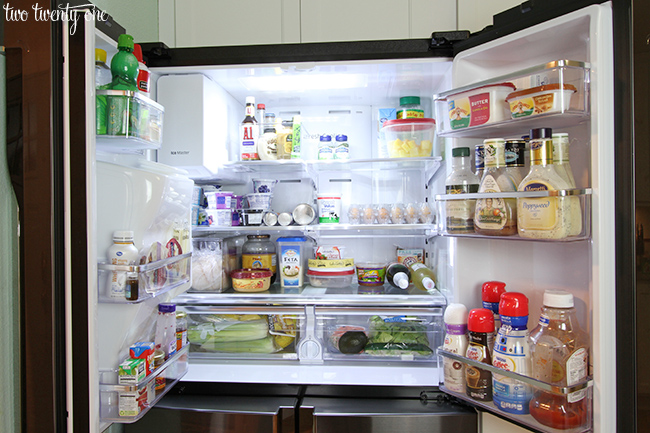 There’s a lot space in the door compartment on the right side. Plenty of room to hold our collections of butters, salad dressings, coffee creamers, and mammoth-sized bottles of barbecue sauce and ketchup. 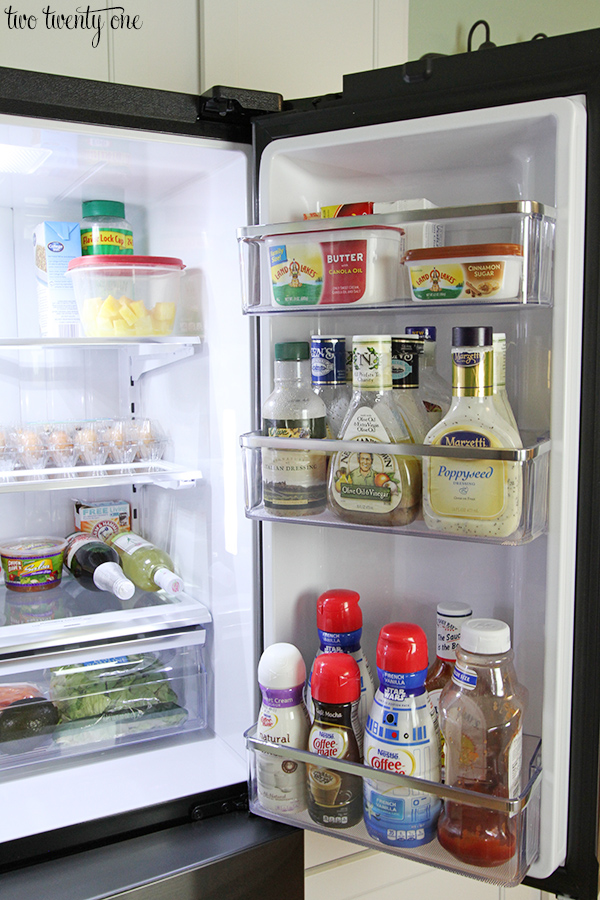 The space on the left door compartment isn’t as ample as the right due to the ice and water dispenser, but I can live with it. 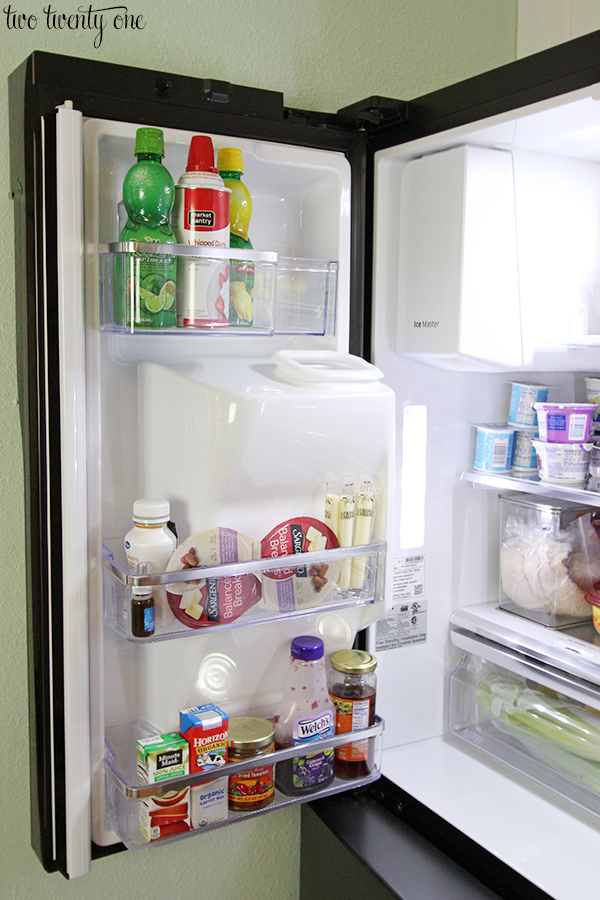 The ice maker is pretty streamline. Since there’s not much space directly underneath it, we store yogurt there because it’s the best fit.

The very top shelf with the condiments can flip up for storage of taller items.

There’s also two humidity-controlled crisper drawers for fruits and vegetables. The drawers do a good job because we always have lettuce, and the lettuce is definitely lasting longer in this fridge compared to our old, standard fridge. 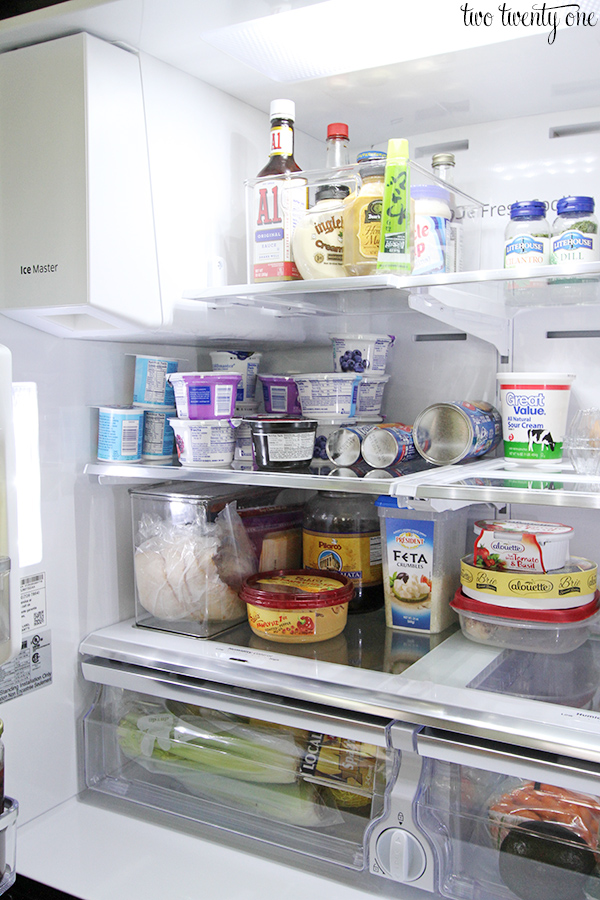 One feature I like, is the adjustable shelf on the right side of the fridge. 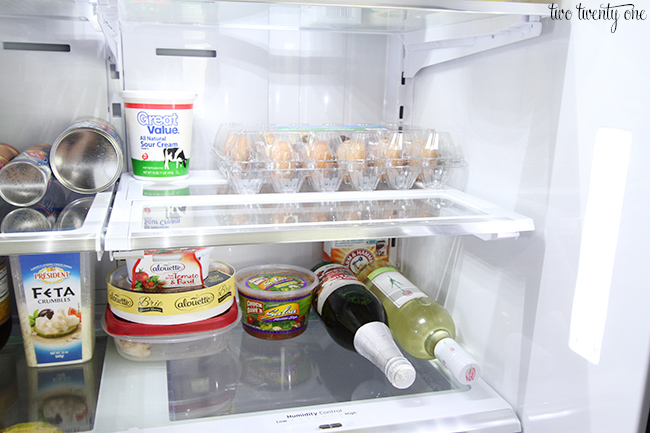 If we have taller objects that we need to accommodate, we can slide the front part of the shelf back. The shelf also flips up if we need even more vertical space. 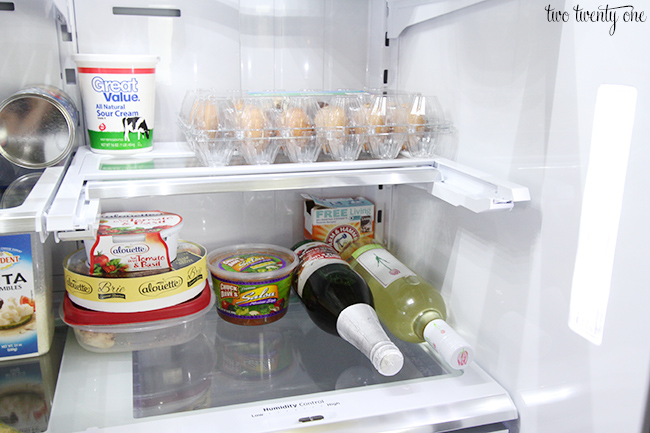 That concludes the upstairs portion of the tour. 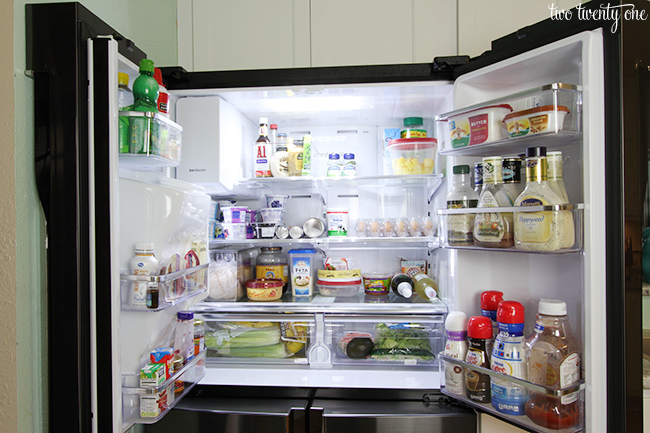 Moving downstairs, the two bottom compartments are separate. The left side is a freezer. The right side can be either a freezer OR a fridge, with four different cooling settings– fridge at 41°F, chilled at 30°F, soft freeze at 23°F, and frozen at -9° to 1°F.

We currently have the lower right compartment as a freezer, but we’re leaning toward making it a fridge section, especially with Christmas coming up– things are going to get pretty tight in the main fridge area. We have a small deep freeze out in our garage, so we would just move some of the freezer food out there. 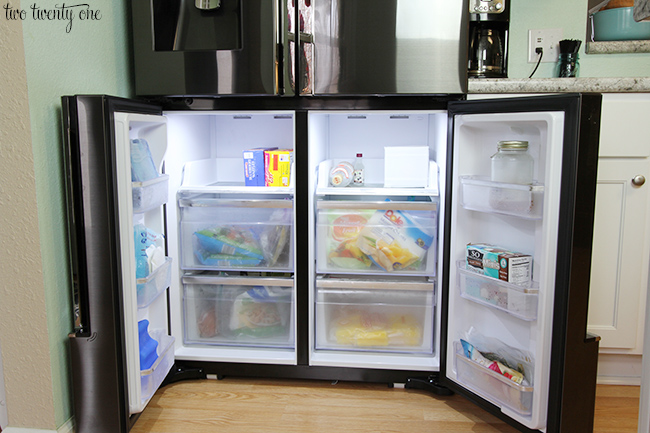 Both the right and left compartments are identical. Each features three storage areas in the doors, two drawers, and top shelf. 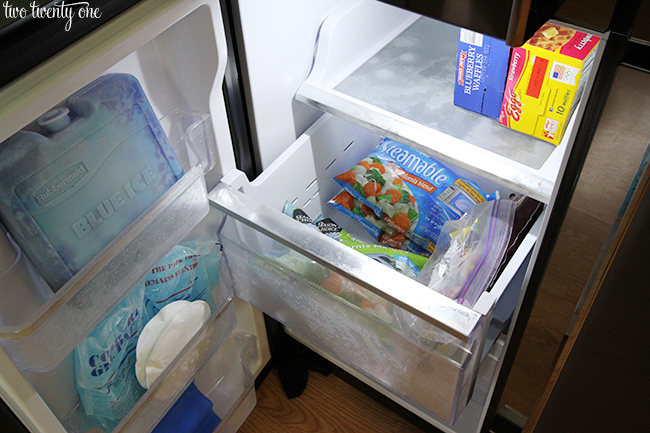 The shelf also slides out, making it easier to grab things, like Owen’s waffles. 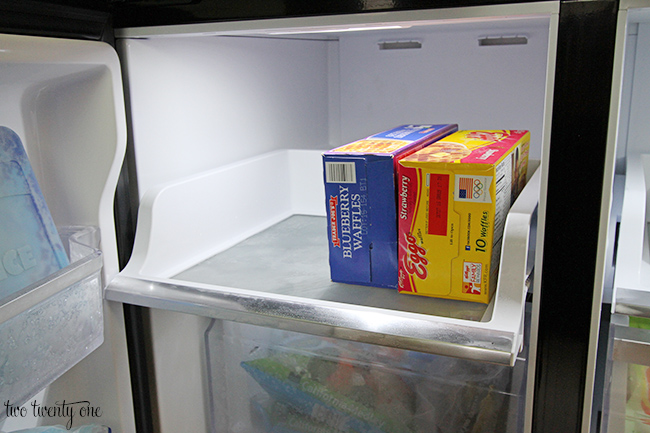 The drawers are really deep. So there’s plenty of space for Brad to store his super gross banana-flavored popsicles.

Annnd I just realized the date on those pecans says 12-12, which means that I probably need to discard them because pecans are only good for 2 years in the freezer. 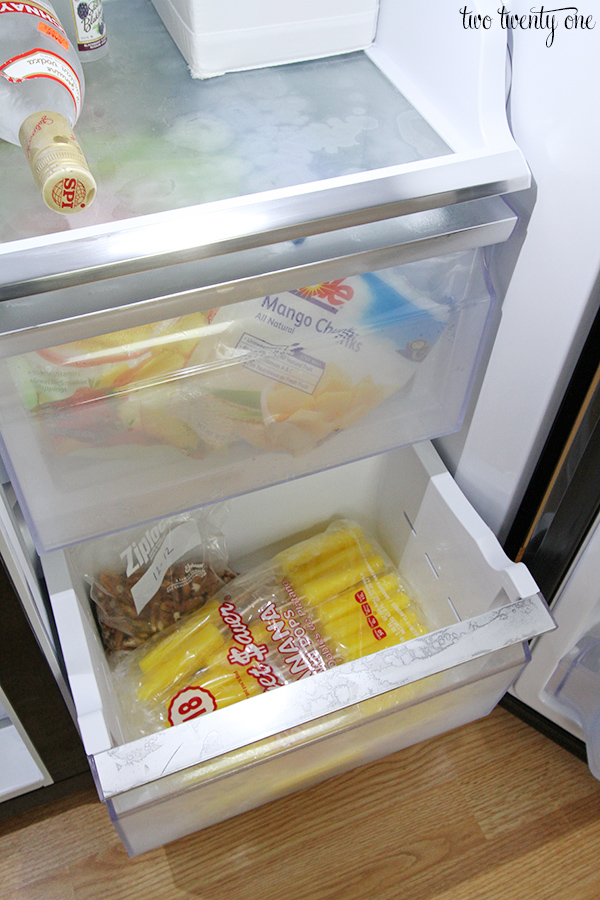 My only complaint is when the cubed ice comes out, little ice chips tend to scatter everywhere, even when I put my water bottle or cup all the way up in an attempt to catch everything. Buuuut, if Owen is near, he’ll run over and attempt to pick up the tiny pieces of ice and hand them to me, which helps with his fine motor skills/pincer grasp. 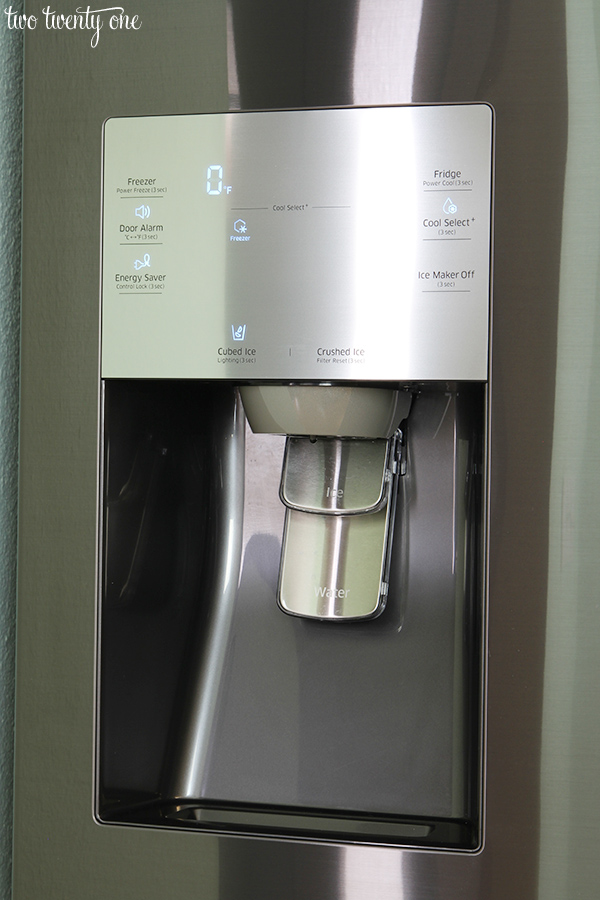 Let me talk about the black stainless steel. Amazing is one word I would use to describe. It has such a cool, sleek look to it, and it’s also better at hiding smudges than regular stainless steel. But I wouldn’t know anything about that because our one year old never touches the fridge nor does he clamors to help us shut the doors every.single.time. we open a door while he’s within eyeshot.

Note: We’ve since sold this home, so I don’t know the size of the fridge opening. But as you can see in the photos, the opening is roughly 3-5 inches wider than the fridge, which is 35 3/4″ wide.

January, 2020– In the 4 years that we had the Samsung Flex refrigerator, the ice maker was continually breaking. There was actually a class action lawsuit in regards to Samsung ice makers. The ice maker issues started about a year after owning the fridge. We had it serviced twice but continually had issues with it. The ice maker leaked all the time and would freeze up and not make ice. Then, after less than 4 years of owning the fridge, it died. The fridge wasn’t staying cool like it should and the temperature was rising. In hindsight, the fridge never got as cold as I think it should have. We had a service tech come out (it’s difficult to find a Samsung fridge tech, by the way), and he said it was most likely a freon leak. He said it would be costly and nearly impossible to find the leak so we should just cut our losses and get a new fridge. I do not recommend this fridge. We’ll never own another Samsung kitchen appliance.

And after sharing my experience on Instagram, many people messaged me saying their Samsung fridge has/had tons of problems.

Get the latest DIY projects, organization ideas, tips & tricks and more delivered to your inbox!
Your information will *never* be shared or sold to a 3rd party.
« Frozen Hot Chocolate
Poinsettia Wreath – DIY Christmas Tutorial »