With warmer months approaching, I thought now is a good time to share some outdoor water toys for kids. And with the current situation, it’s best to purchase sooner rather than later. I say this because items I selected for this post are already starting to sell out. They may be restocked though. I just wanted to share that little tidbit. 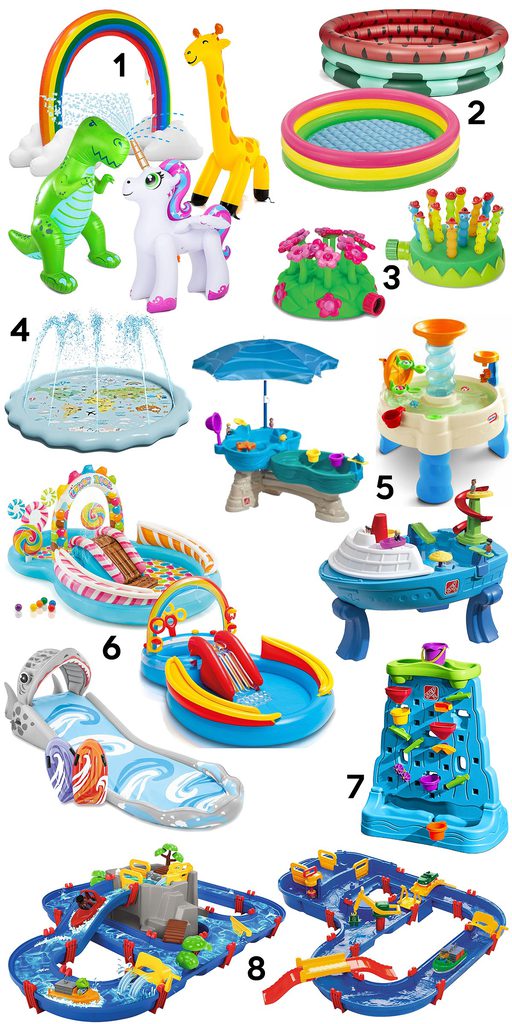 There are tons of fun inflatable sprinklers out there. From rainbows to giraffes to unicorns and alicorns to dinosaurs. Just blow it up, hook up your hose and your kids are ready to go. To inflate things faster, I suggest using an air compressor or an inexpensive electric pump. They’re also good to have on hand when blowing up an air mattress.

The hard plastic pools are great but not the best when it comes to storage. That’s when inflatable pools come into play. You can find all shapes and sizes for good prices. I think this watermelon pool this colorful pool are cute.

Sprinklers— a right of passage for children.

Like sprinkler, but it’s a mat. Think mini splash pad, but in your backyard. I ordered this one for the boys. If you don’t like the specific one I linked, click here— there’s tons to choose from.

Water tables are great for the toddler and preschool crowd. The selection is pretty vast– from a spiral waterpark to a pirate ship to a cruise ship. If you’re feeling ballsy and can trust your kiddo not to eat them, mix things up and add water beads.

Seriously, outdoor water toys have come a long way for kids these days. Case in point, inflatable play centers. These are inflatable pools on steroids. Isn’t the Candy Land themed one so cute? It’s pretty popular because it sold out on Amazon over night. I found it here though. I chose the red, blue, and yellow play center because it doesn’t have many accessories that also need to be blown up. For older kids, I thought this inflatable slide looked pretty cool.

This waterfall discovery wall is a pretty popular water toy. It doesn’t take up much space, is double-sided (yay, for less fights), and has problem-solving and water movement components.

We bought Owen the water play set on the left side of the graphic nearly 2 years ago. Both boys loved playing with it last summer on our deck. I share it quite often on my IG Stories during summer. It’s like a water table but more interactive. They teach kids how water moves and lock systems (depending on the set). To mix things up, I like to add a little dish soap to make foam/bubbles. And these plastic monster trucks fit perfectly in the waterways. The water play sets seem to be selling out quickly, but here are some places where I’ve found some– Walmart, Target, Amazon, QVC, HSN, Bed, Bath & Beyond, and Selfridges & Co. 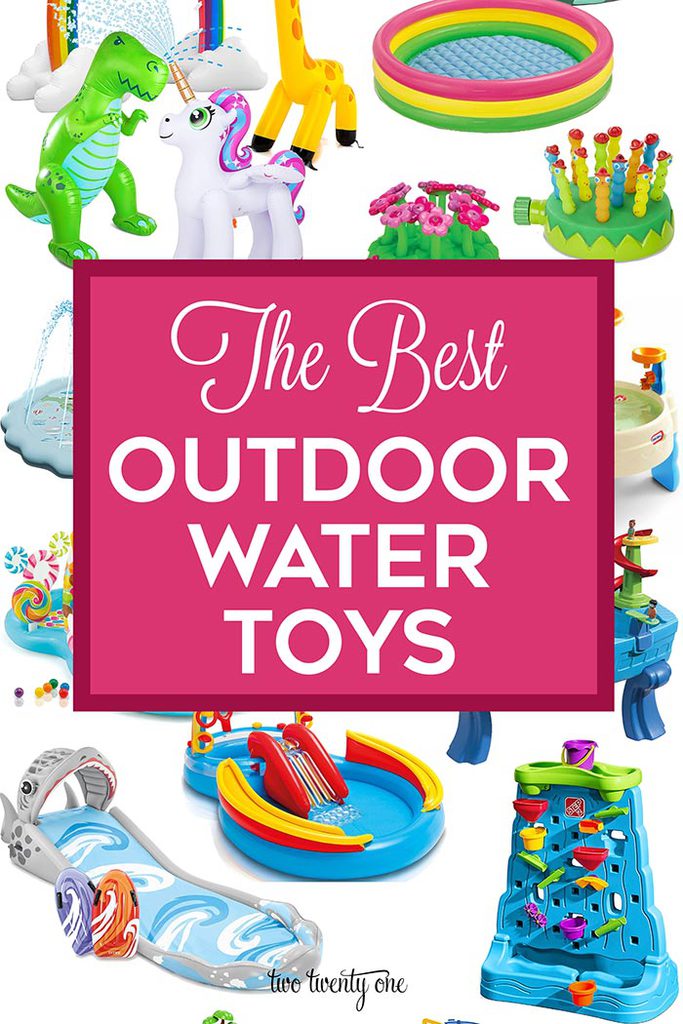 Get the latest DIY projects, organization ideas, tips & tricks and more delivered to your inbox!
Your information will *never* be shared or sold to a 3rd party.
« Transitional Decor Bloggers
Favorite Skin Care Products »