I had been trying to get tickets for my best friend, Natalie, and I to the Oprah show lately. Especially since it’s her last season, and I live only a couple hours from Chicago.

How to Get Tickets to The Oprah Winfrey Show

Last week, I applied for last minute tickets for a taping featuring Jennifer Aniston and Adam Sandler. Fast forward a week and my cell phone rang, but the caller ID said “unavailable” so I let it go to voicemail. A minute later I got an email from the Oprah show asking if I was available on Friday for the taping featuring Jennifer Aniston and for the screening of her new movie, Just Go With It, the evening before.

After screaming and calling Natalie, I replied as fast as I could.

When I got home from work I got an email that began, “Thanks for the information. You and your guests are now confirmed for the 1/28/11 A taping of the Oprah Winfrey Show with Jennifer Aniston.”

I called Natalie, screaming. She could barely understand what I was saying. After a while she told me to slow down and talk in “human speech”.

The plan was for Natalie and I to attend the private screening of Just Go With It on Thursday night. Then, on Friday morning we’d be up bright and early to go to the morning taping of the Oprah show.

I drove up to Chicago on Thursday. After getting to Natalie’s apartment, we only had about 45 minutes to get ready before we had to head out to the movie screening of Just Go With It. Since we couldn’t take our cameras into the movie theater we took some photos of ourselves in her apartment before going to the screening because we’re super cool like that. 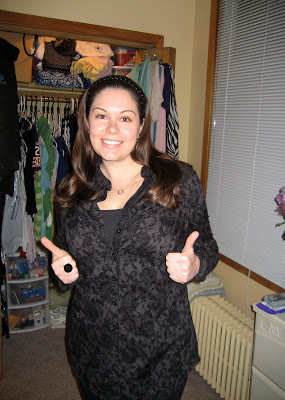 The movie screening was really fun {sans the extremely whiny girl next to me}. I was elated when we didn’t have to sit through any previews–the movie just started playing! Another cool thing was that Natalie sat next to the lady whose company created the inflatables {the cruise ship and snow globes} for “Oprah’s Ultimate Favorite Things”.

Just Go With It was very funny. Adam and Jen had good chemistry. Jen looked gorgeous, like always. One of my favorites, the handsome, Dave Matthews makes a cameo in the movie too. I plan on seeing the movie again with Brad when it comes out on Feb. 11th.

After the movie, it was back to Natalie’s apartment to get some sleep.

The Morning of the Show 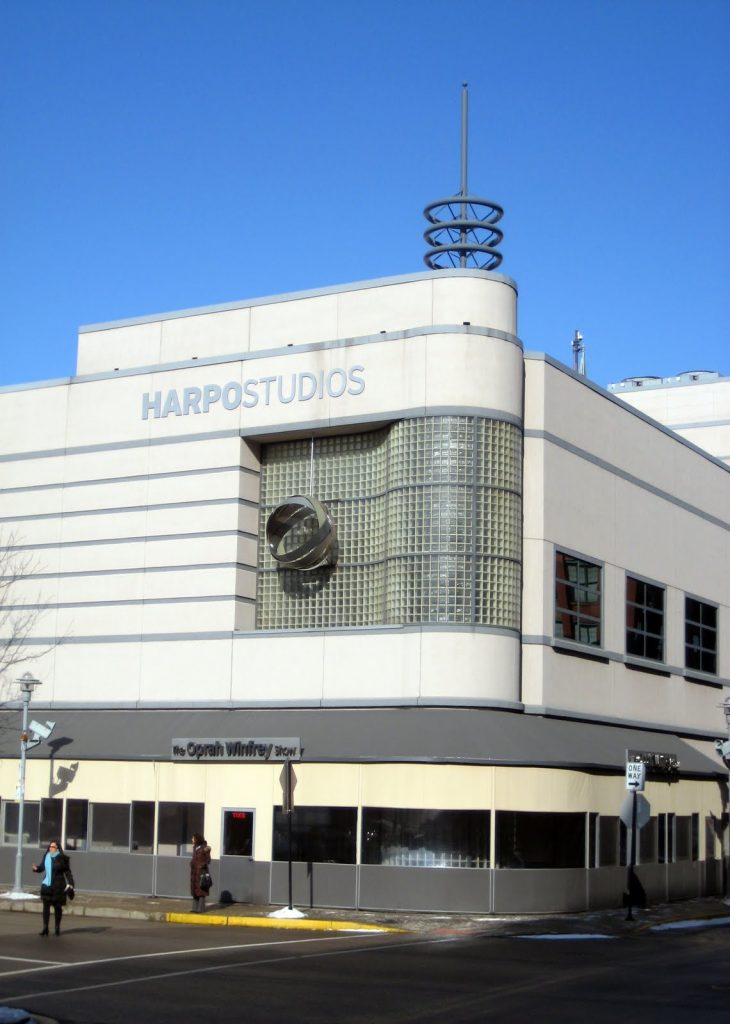 We took this after the show. It wasn’t light outside at 6:30 AM. 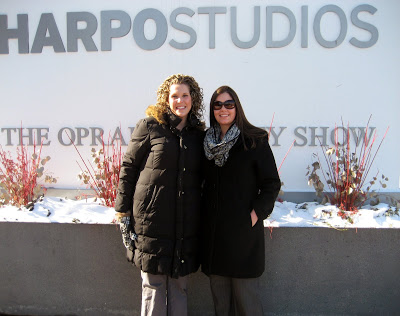 The Taping of the Show

I don’t have any pictures of us inside the studio because cameras were not permitted. We only have our mental pictures. I’ll make an Oprah plug right now– you can see what I saw by watching “Season 25: Oprah Behind the Scenes” on OWN. We might be on an episode of “Season 25” because they were doing filming for it when we there. A camera crew came into the waiting area and told us to cheer and clap, but to not look at the cameras. It was kind of awkward to be yelling, cheering, and clapping but avoid looking directly at the cameras.

We were called into the studio around 8:15 AM. We sat in the upper section right by where Oprah enters. We weren’t 10 feet from the stage like what I would have wanted, but the studio is very small (it looks much larger on TV) and we got to see everything that was going on from where we were sitting. PLUS, with the way the guests’ chairs were positioned they were looking right at us.

Oprah’s staff amped us for about 15-20 minutes. They asked the audience members questions. They asked us if we had any questions for them. We danced a little. Her staff is very nice, and they all seem to love their jobs.

When Oprah came out it was surreal. It was like watching her on TV but I was there. She looked beautiful. I loved her glittery purple skirt. Her hair and make-up looked perfect. May I borrow her “people” for my wedding day? She complimented us (the audience) on our attire and thanked us for taking off work and being there. She was pretty funny too. I was surprised when she said sh*t a few times too. It’s like hearing your teacher cuss.

She started by talking with the American Idol judges via satellite. I’m not an AI fan, so I won’t expand.

Then, Jen came out. I don’t think this will be a surprise to anyone, but she’s gorgeous in real life. She looks just like she does in film and print. She’s so tiny. I love how down-to-earth she is. She seems like such a genuine person.

Next, Adam joined them on stage. He wore a suit, which I thought was cute. Dressing up for the Oprah! I love him. He was funny and charming. He seems like such a normal person too. I’d have a beer with him.

It was honor being able to see both Jen and Adam in person. Oprah, too, obviously. 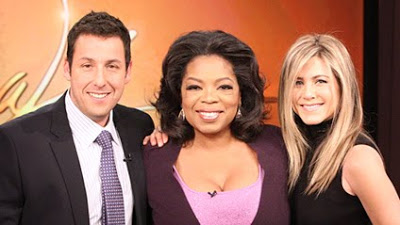 When the taping was finished, Oprah thanked the audience again for coming to the show. She said she knows that many of us go through a lot to come to the show– take off work, buy new outfits (Natalie & me), get manicures (Natalie), get our hair done (me).

The episode will air on Wednesday, Feb. 2nd. Look for my turquoise cardigan. Natalie is sitting to my left wearing a green cardigan. There’s a man in a pink shirt sitting to Natalie’s left.

Now, “Attend The Oprah Winfrey Show” can be crossed off my bucket list.

Get the latest DIY projects, organization ideas, tips & tricks and more delivered to your inbox!
Your information will *never* be shared or sold to a 3rd party.
« Thrifty Hurricane Tutorial
Moss Covered Initials Tutorial {Monograms} »