Sharing the story of my galactocele (milk cyst) that was brought on by breastfeeding, twice. I explain how I was diagnosed, the prognosis, and more.

I get emails and messages about my galactocele (milk cyst) from time to time, so I decided it was best for me to dedicate a post to direct to people toward instead of emailing them a novel. So if you don’t care at all about this topic, I don’t blame you for skipping this post. Carry on, and have a great day!

I’ll start out with the blanket statement that I’m not a doctor, this is just my experience and what I’ve been told by my healthcare providers. If you find a lump in your breast, whether nursing or not, please see your doctor.

My galactocele, which I typically call a milk cyst, developed in my right breast when my milk came in with our first son, Owen, back in August, 2014. I noticed it when I felt my breast. (You get rather familiar with your body during pregnancy, birth, postpartum, and nursing.) This sucker was large, at least the size of two ping pong balls. It wasn’t painful when I was just sitting there minding my own business. It really only hurt when pressure was applied to my breast, like when people hugged me.

After noticing the mass and being kinda freaked out, I called up my OBGYN, and was like “Yo, I gotta see you about this.” When I saw her she was all, “How big would you say it is? A pea? A marble?” I laughed and said, “Feel for yourself.” She examined my breast and said, “Wow.” She then sent me to the lactation consultant at the hospital right away. There was hope it was just a clogged milk duct that needed some help. The LC couldn’t get it to budge by using warm compress and the hospital grade breast pump. She instructed me to go home, do warm compress (take a diaper, fill it with some water, throw it in the microwave for a little bit), massage, nurse, pump, yada yada yada. I tried that for a few days, but it didn’t work. So I called my OBGYN and she told me to schedule an ultrasound at the women’s center in the hospital.

“We Won’t Know What It is Until We Empty It”

I was 3 weeks postpartum when I had the ultrasound. It was in the middle of a weekday, and my husband, Brad, didn’t have any more days left so he couldn’t take off work to stay with Owen. So I ended up leaving Owen with the nice ladies at the front desk of the women’s center. I mean, they worked at a hospital– they clearly could be trusted. I went back for the ultrasound, and what I saw on the screen was a giant black oval. They kept calling it a mass. The radiologist didn’t know what it was filled with, so they suggested that I have it aspirated with a syringe. And let me say that this was a very traumatizing experience for me. I was 3 weeks postpartum, after a 24 hour failed induction and c-section, a week early I had to have a separate postpartum-related procedure done in the ER, and I was at the appointment by myself. So I did what any new mom would do– I started crying.

They were really nice and had a nurse come in, talk me down, and hold my hand. I decided to let them aspirate the mass. They numbed the area of my breast the syringe would need to travel through. Then, they inserted a giant needle into my breast, guided by ultrasound, and withdrew 50 mL of breast milk from the mass. (I couldn’t take the milk home with me. It was tainted by the numbing meds they injected into my breast and the galactocele.) There was hope it wouldn’t fill back up. But within 24 hours, it was a raging galactocele once more. 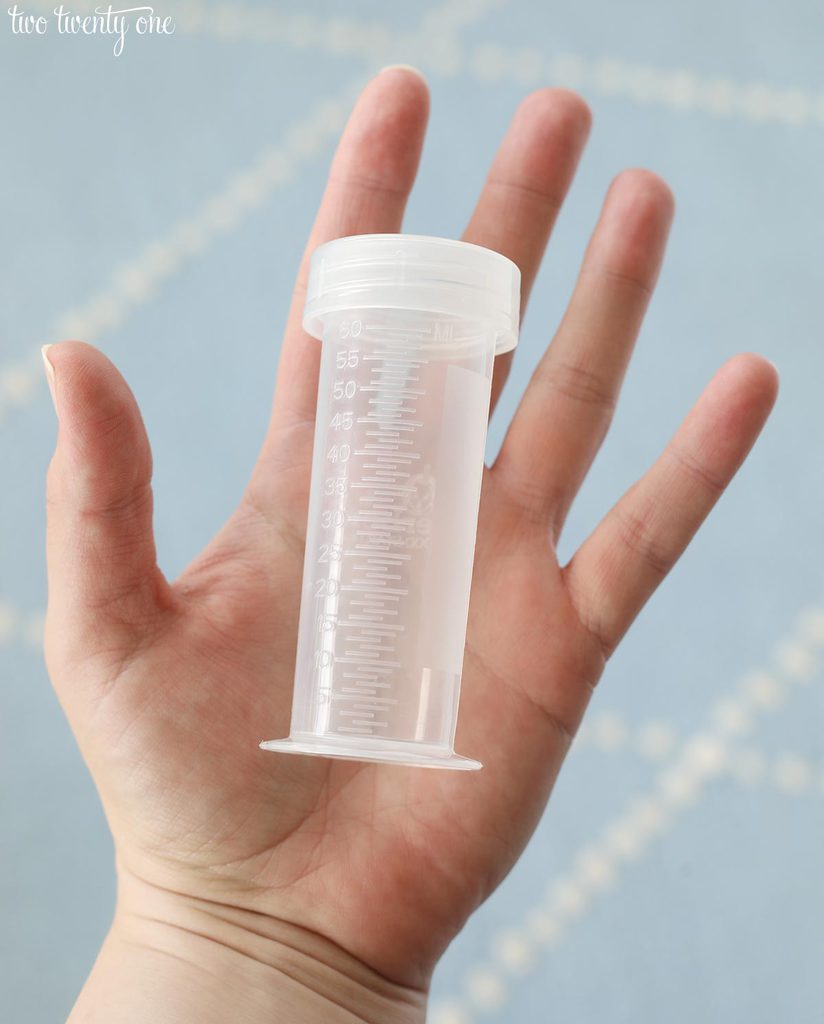 I had a follow up ultrasound 5 weeks later. This time they spotted some “questionable tissue” inside the filled cyst, so they suggested another aspiration and a needle biopsy to check for cancer. The needle biopsy was not the most pleasurable procedure– it’s a large gauge needle that goes in and suctions out the tissue. They aspirated 45 mL of breast milk that time. When they did the biopsy it caused a hematoma inside the galactocele. So every time I expressed breast milk, for the next week, blood would also come out– some call it ‘strawberry milk’. While this wasn’t painful, it was slightly unsettling. Mentally, I had a hard time nursing Owen and allowing him to drink my blood so I would pump and dump. But my supply started to dip so I said, “Screw it, I made this kid inside my body” and started nursing him again on that breast. Him drinking a little of my blood was totally harmless, according to his pediatrician. And I could tell when the bleeding had stopped because his stools became lighter in color. I KNOW this sounds so weird and creepy, but I’m sharing this in case someone else is going through this and is freaked out about feeding their baby breast milk with a dash of blood.

Thankfully, the biopsy came back as benign. But so did the galactocele.

You Should See a Breast Surgeon

She didn’t see an issue with the galactocele. There’s no increased chance of cancer or anything like that with a galactocele. She did not recommend surgically removing it, because she doesn’t like to operate on lactating women. My surgeon explained that scarring is terrible after operating on a lactating breast, which is understandable. Her prognosis was that the milk cyst would dry up when I stopped nursing. And it did for the most part when I stopped nursing Owen at 11 months. However, I had to go back to her in the summer of 2016 because there was still some milk in the galactocele. She aspirated what she could. And within 6 months or so, the galactocele had softened so much that I could barely tell it was there. I continued to see my surgeon every 6 months for ultrasounds, and I even got a mammogram once.

When I asked if it would come back with a second baby, she said it could or it couldn’t– there really wasn’t anyway of knowing. She didn’t recommend surgically removing it once I was done nursing because there would be scarring. I agreed because I still have a small scar from the needle biopsy, and I didn’t want a Frankenboob if it wasn’t absolutely necessary.

Our second son, Emmett, was born around 8AM and by that evening, I felt the galactocele filling back up. I had kind of prepared myself for it. But it came back in a slightly different location. It’s closer to the surface of my breast, and closer to my nipple, which has caused some latching issues for Emmett, but we’re working with it. 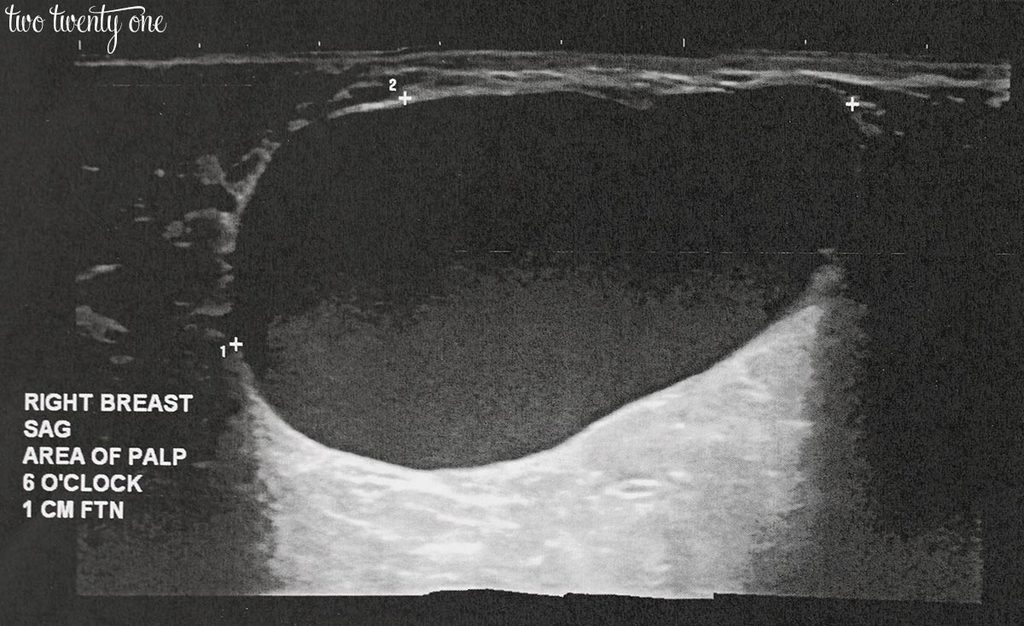 Back to the Breast Surgeon

After I got home from the hospital, I waited a couple days and decided to call my breast surgeon. When I called to make the appointment and the scheduler said, “Have you tried warm compress? Massage?” Hahahahahahaaaaa. I was all, “Thank you, but this isn’t my first rodeo.”

Since Emmett was only 2 weeks old and hadn’t taken a bottle yet, I had to take him with me because these appointments take at least 2 hours. I had the ultrasound first. And then I went back to consult with my surgeon. She recommended aspirating the galactocele (she had never aspirated while it was at maximum capacity), in an attempt to get it to collapse and go away. If she couldn’t get it to go away, she hoped she could make it smaller by collapsing a section of it. I agreed to try it, even after a woman from the front desk came back and said it’d cost $2300 out-of-pocket. Cue the postpartum-hormonal-holy-crap-that’s-a-lot-of-money tears.

Back and Bigger Than Ever

So while a nurse held Emmett, my surgeon numbed my breast, and then aspirated 60 mL of breast milk from the galactocele. Back and bigger than ever, folks!

My surgeon instructed me not to nurse or pump on my right breast for 24-48 hours. She also said we may have to do this a few times in order for it to work. I set my goal to 48 hours because I didn’t want to do this again.

I have to say that the engorgement was painful AF. Seriously– not enough frozen peas in the world. And at around the 30 hour mark, I reached down and felt the galactocele was back. I defeatedly told Brad I’d be upstairs pumping.

After the aspiration, I talked (well, it was mostly an emotional talk while crying kind of thing) to Brad about how I see things going from here on out. I said I think I’ll have to wean Emmett sooner rather than later– my goal with both boys has always been one year. The goal would be to wean him in November (when he’s roughly 9 months old), let my milk dry up, and have the rest of the galactocele aspirated in December before our deductible rolls over in January. Because is nursing our son for an extra 3-4 months (into 2019) worth $2,300+ to have the galactocele aspirated again? It’s sad contemplating this decision based off of money but it’s our reality. So there’s that.

This post was originally published in early May, 2018. We ended up switching our son to formula in mid-May due to his cow’s milk protein allergy diagnosis and other factors. I gave it about a month for my breast milk to dry up, but I ended up going back to see my breast surgeon to have her aspirate the rest of the breast milk from my galactocele. Since then, I haven’t had any issues.

Feel Free to Reach Out

Get the latest DIY projects, organization ideas, tips & tricks and more delivered to your inbox!
Your information will *never* be shared or sold to a 3rd party.
« Peanut Butter Balls – Easy, No Bake Recipe
Guest Bedroom Refresh »

© Two Twenty One, 2011-2019. Unauthorized use and/or duplication of this material without express and written permission from this blog’s author is strictly prohibited.