This year when I asked Owen what he wanted to be or Halloween, he said a firefighter. I gently guided him away from that because he’s been a firefighter the past two Halloweens. He stated that he wanted to wear a vehicle of some sort, like the fire truck he wore the past two years. I came across a yellow tractor while browsing online, showed it to him and said, “How about a farmer with a tractor?” He was sold and never changed his mind. Thank goodness.

Last year while Owen was a firefighter, I dressed Emmett as his trusty Dalmatian. It was freaking adorable. I’m assuming I won’t be able to dress them in coordinating costumes for very long because Owen will eventually say that he doesn’t want to be lumped together with his baby brother. So I feel I should take advantage of it while I can.

Note: If your child doesn’t want to wear a traditional costume, opt for firefighter pajamas. Owen actually wore these when he was three. 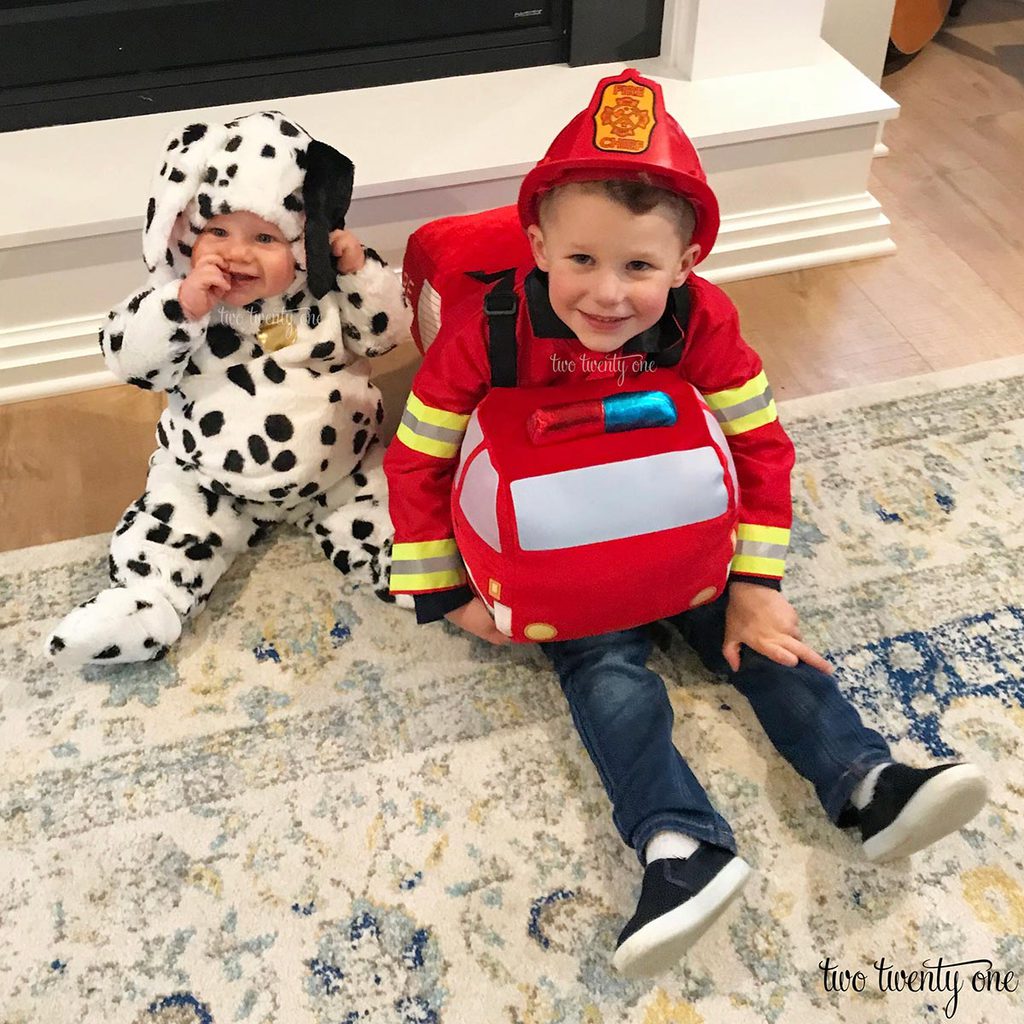 After Owen declared that he wanted to be a farmer, I thought, “What goes with a farmer?” Corn immediately popped into my head. As luck would have it, they make infant and toddler corn costumes so all I had to do was find a green shirt, leggings, socks, and shoes for Emmett to wear. 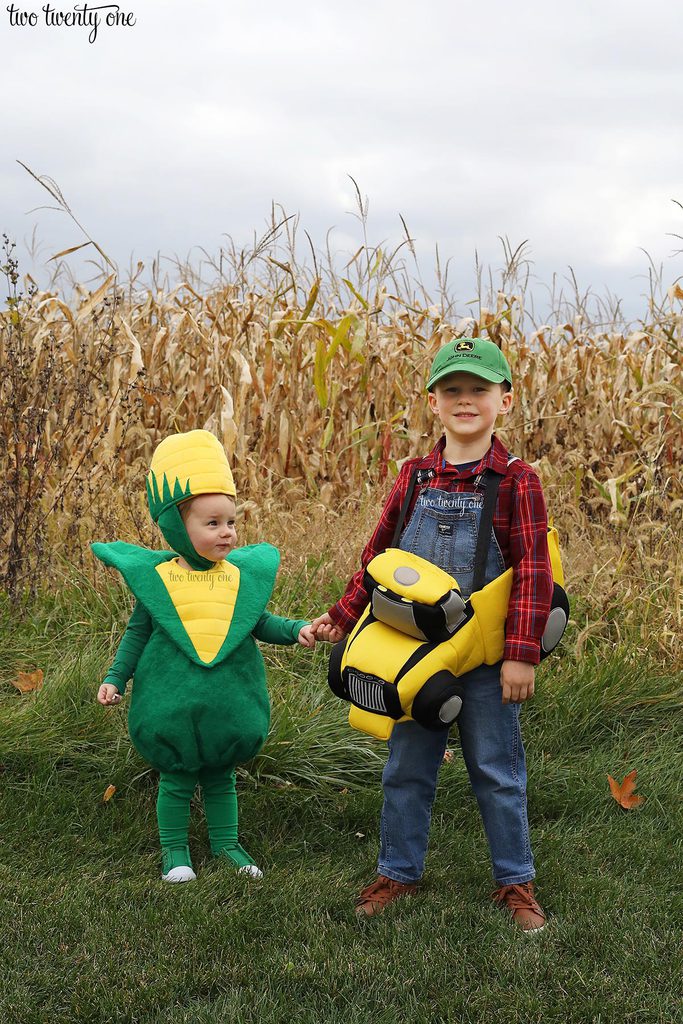 Owen’s farmer costume was pieced together with various things I found online. We could’ve done regular jeans instead of the overalls but kids in overalls are cute, and I doubt he’ll ever want to wear overalls again. I figure we can re-use the shirt for Christmas, and he already broke in the sneakers at my cousin’s wedding. 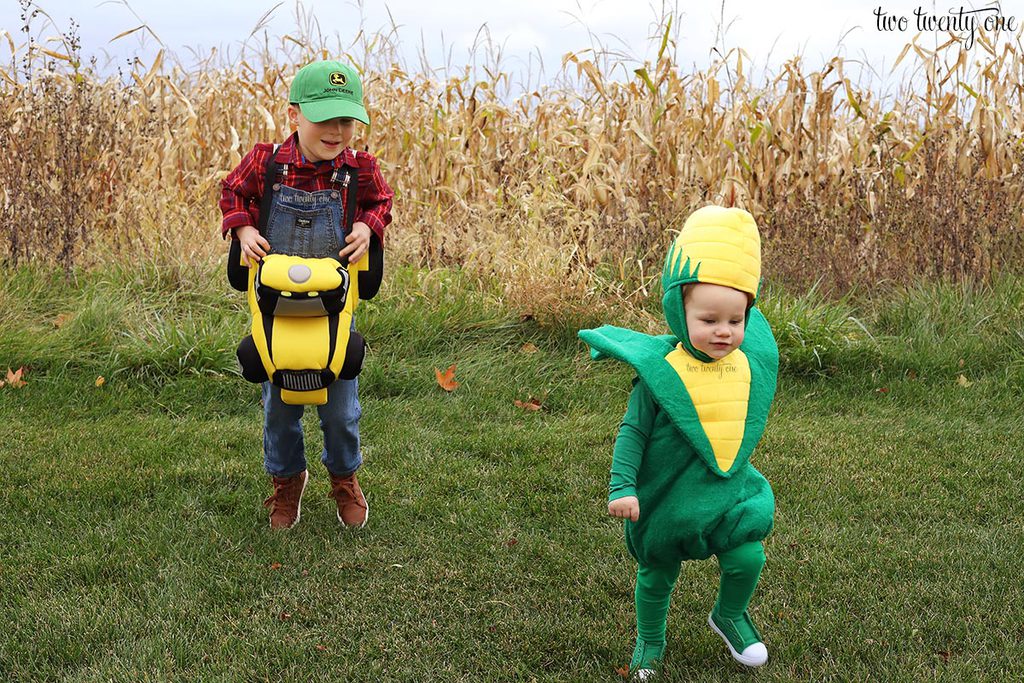 I ordered an infant and a toddler corn costume to see which would best fit Emmett. The infant-sized one was the winner. I did have to make a hole on the inside of the corn hat and stuff in some more Poly-fil to give it a fuller look and to better fit his head. In all honesty, I opened up an old pillow, pulled the Poly-fil out and used that instead of running to the store and buying some. This was my first time buying clothing from Primary. I’m very impressed with the quality of the leggings and socks. He’s actually wearing an old green shirt, but I linked to a green shirt from Primary.

I drove around entirely too long looking for a cornfield that hadn’t been cleared, we wouldn’t be blatantly trespassing, and there weren’t tons of people around to stare at us. Oddly enough, I found this spot at an entrance to a subdivision with a convenient parking spot right in front of the corn. So I parked, changed the boys into their costumes in the car, took their photos in front of the corn, loaded back up, and headed home. Emmett kept trying to run off, so I had Owen hold his hand, which helped immensely. Plus, it’s super sweet.

Now I’m kicking myself for not getting their photos in front of a real fire truck last year.

Pro Tip: Bribe your littlest one(s) with Smarties. They’re small and lightly colored so they’re not as obvious in photos. 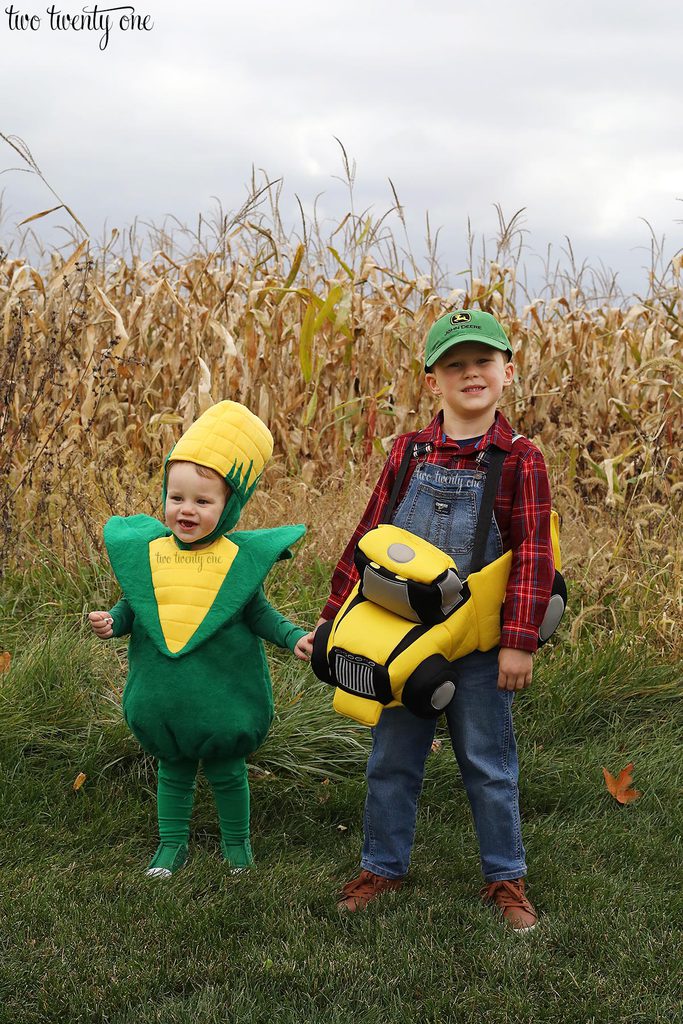 Get the latest DIY projects, organization ideas, tips & tricks and more delivered to your inbox!
Your information will *never* be shared or sold to a 3rd party.
« How to Make a Floral Headband
How to Make a Red Hydrangea Wreath »