How did you know you were preggers?
My period was a week late and that’s not normal for me. So I ran to the store and bought 3 different pregnancy tests. The plus sign showed up pretty quickly.

Were you trying or was it a surprise?
We planned to officially start trying after I got back from my New Orleans girls’ trip (MLK weekend). I mean who wants to be stone cold sober in New Orleans? BUT, things obviously didn’t work out that way. I have many friends who have struggled with infertility so I had convinced myself that we would have issues too, and there was no way we’d get pregnant the first time we weren’t super careful. Yeah. I was wrong. So it was a surprise, but we were only 2 months away from beginning to try so we weren’t completely shocked.

How did you tell your husband? What did he say when you told him?
I found out on a Friday morning, but I waited until Saturday morning to tell Brad. I put an Indiana University (our alma mater and where we met) onesie and a card inside a gift box. I gave it to him and told him I got him an early Christmas gift. He opened it, pulled out the onesie, said something like “Hah, that’s nice”. He didn’t get it because I’ve been buying baby IU stuff for years. I figured this might happen, which is why I put the card in the bottom. So I told him to open the card. He opened the card, read it, looked at me stunned, said something like “Are you serious?”, and hugged & kissed me. He was (and still is) pretty excited. I have it all on film but apparently the microphone on my camera was/is broken because there’s no sound. Blerg. 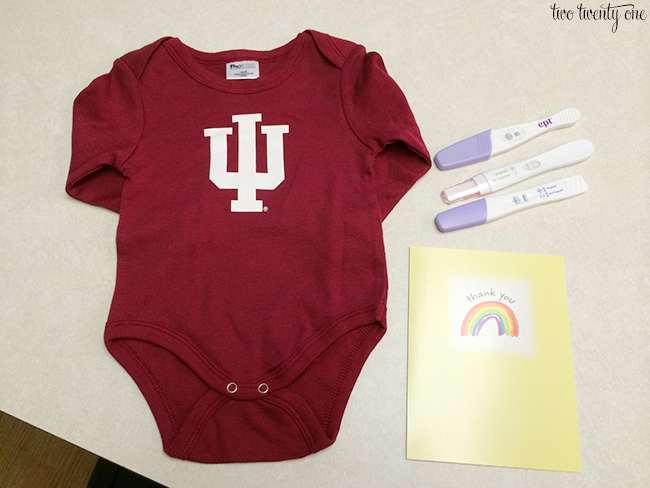 When he took the card out of the envelope and saw “thank you” written on the front he made a “what the heck” confused face. 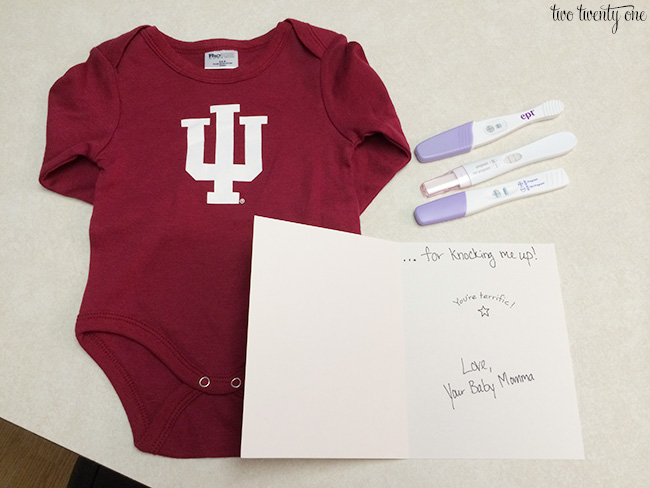 I think we’ll frame the card and hang it in the nursery. Hah!

Is this your first child?
Yep. And we’ve given it the pet name “nugget” so if I use that word, I’m talking about the fetus. Oh, and there’s only one in there. After we got home from the ultrasound, it dawned on me while Brad and I were watching TV. I turned to him and said, “High five for there only being one!” While I think twins would be awesome, especially because my mom is an identical twin, I don’t know if I could handle two on my first round of motherhood.

Have you been feeling well?
For the most part, yes. I’ve had very little nausea (like a 1.5 on a scale of 10) and no vomiting. If I felt nauseous, I could suck on a peppermint or eat through the nausea and feel better. My doctor told me not to speak of my non-morning sickness symptoms in the waiting room or I may get mugged. I get tired more easily. I used to be able to get by on 6-7 hours of sleep. Now I require 9-11 hours. But getting good sleep has been an issue too. This is probably because we’re sleeping on a hard, cheapo mattress. We really need to bite the bullet and get a new bed. And I haven’t really felt like myself. I blame the fatigue and not feeling like myself on the lack of blog posts lately. Sorry about that. It’s the nugget’s fault.

Have you had any cravings yet?
Yeah. In the beginning, right after I found out, I was all about fruit, especially clementines and pineapple, and sour stuff, like Sour Patch Kids. Lately, it’s been Taco Bell. I was never a big Taco Bell person, but I’ve had it 4-5 times in the past 3 weeks. I’ve also craved lemonade, sushi (with cooked seafood– please remain calm), and peanut butter & jelly sandwiches. Super random stuff.

Are you dying to find out now if it’s a boy or a girl?
Yep. I can’t do that wait-til-birth surprise stuff. While I like surprises, there’s too much planning that needs to be done for something like this. We intend to throw a yuppie blogger gender reveal party with our families so they can find out with us.

Where are the pictures of your bump?
I don’t really have a bump yet. It just looks like I ate a big burrito. I feel like a dork taking bump pictures because there’s really nothing to look at at this point.

Will you do weekly updates?
I don’t know. I don’t want you guys to get all stabby and be all “ENOUGH with the bump updates!” So I may do monthly or bi-weekly updates. Things have been so uneventful this far that part of me is like, “Seriously, what changes that much from week to week?”

Have you been experiencing the joys of round ligament pain yet?
No I haven’t, but it sounds fantastic (italics = sarcasm font). Oof. Can’t wait for that business. I have had some minor cramping but I assuming that’s just my uterus stretching. Yay, pregnancy.

Any nursery ideas yet?
Kinda, not really. We know what room we’ll use, and that’s about it. I have been pinning ideas to my secret baby board for a while though. Gotta love those secret boards.

Do you strictly work from home?
No, I still have my infant and toddler developmental therapy job. Although, I have cut back on my caseload. So I work outside of the house two days a week for that. The rest of my time is spent on blog stuff and freelance and brand ambassadorship work.

Do you plan to continue working from home and how that will change with a little one?
I definitely plan to continue to do the blog and my other freelance stuff. I’ll take maternity leave from my developmental therapy job. I’ll probably keep a low caseload whenever I go back to work though. I don’t really know how it will change when the nugget arrives. Perhaps I should contemplate that.

Here are the results from the offspring situation survey from yesterday!

I’m not going to analyze the chart for you because I know you’re fully capable of reading it on your own. But I’m not gonna lie, I’m kind of excited about the 93 pregos.

Get the latest DIY projects, organization ideas, tips & tricks and more delivered to your inbox!
Your information will *never* be shared or sold to a 3rd party.
« Questions For Me and A Question For You
Pregnancy Announcement Mugs + Video of Reactions »