When we were making design selections for the house, I knew I wanted to center the fireplace in the living room (the original floor plan calls for it to be in the left corner by the stairs). We also went with the built-up fireplace because we liked that it made a bigger statement than the standard fireplace. While I wasn’t thrilled about the idea, because I wanted to be able to decorate my first mantel, I had also accepted that we would mount our TV above the fireplace. So much so, that we had all the wires installed above the fireplace. 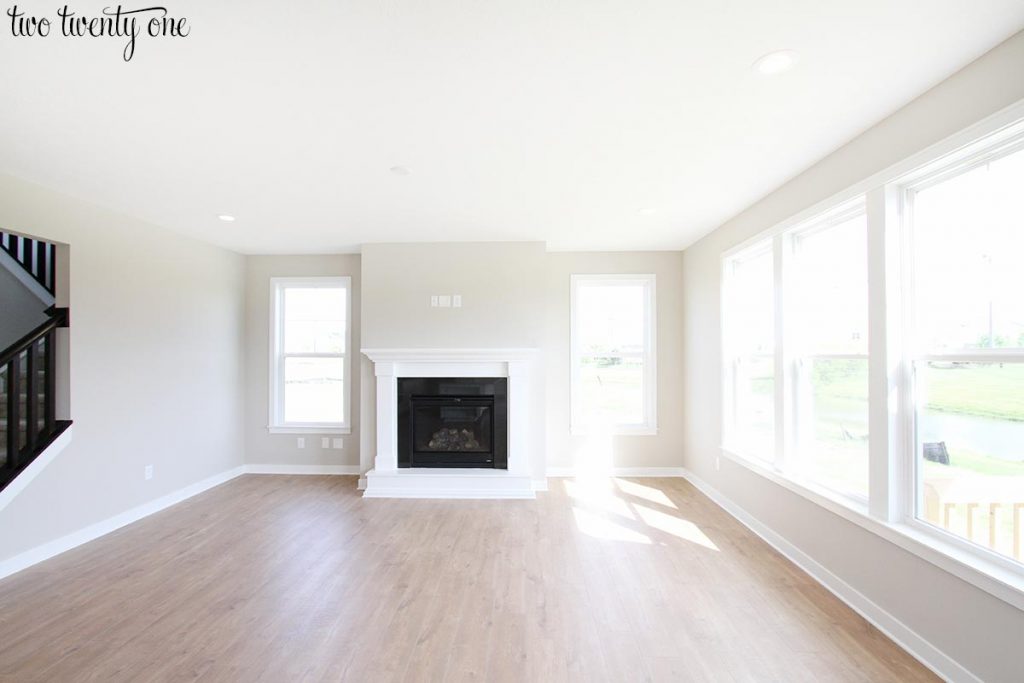 So this was the (Photoshopped) plan: 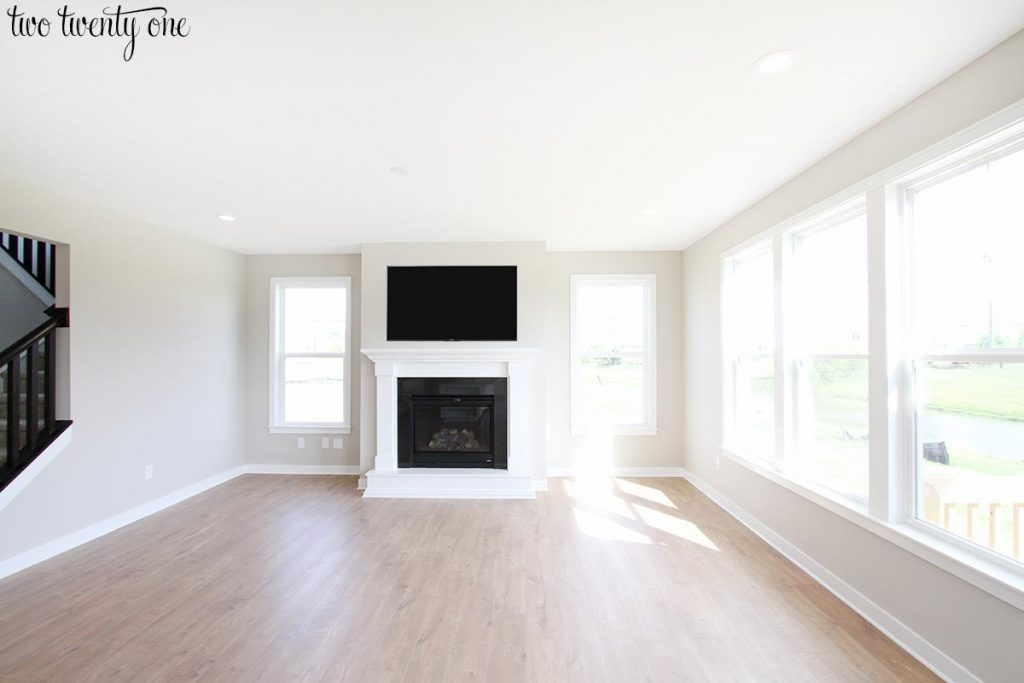 Now, the optimal TV mounting height is 42″ from the floor to the center of the television, granted that number can change depending on the TV size, seat/standing height of the viewer, and distance between the TV and viewer.

If we mounted the TV above the fireplace, the center of the TV would’ve been roughly 80″ above the ground. That’s 38″ above the optimal TV mounting height. And while our living room may appear large in photos, it’s not. The room is roughly 18′ by 18′. Not small by any means, but not huge when you factor in furniture and the jutted out fireplace in the center of the room.

A couple weeks after we moved in, I decided to put a painting on top of the mantel to get it out the way, and away from a certain toddler. Placing the painting on top the mantel was a great idea in hindsight. We were able to sit on the couch and love seat and look at the painting, imagining it as a TV. And we realized something– we were straining our necks and eyes to look up. It was also hard to see it from the love seat, which is in front of our three living room windows. I took the photo below to show the view from the couch. The photo doesn’t quite do it justice but you can get the idea of having to look up in order to watch Game of Thrones. And we didn’t think the viewing experience would improve that much with a TV mount that allowed the TV to tilt down. 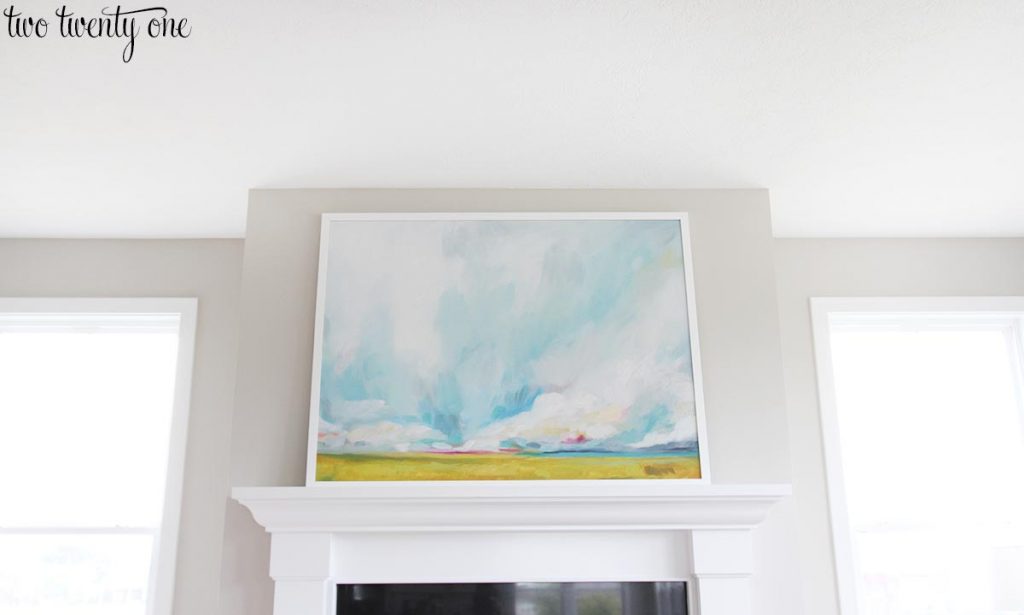 When we initially moved into the house, we put the TV on our dresser turned TV stand on the wall by the stairs. We liked the TV over there because we could see the TV from the couch and the love seat without straining our necks or eyes. So I suggested that we mount the TV on that wall. And by using a full-motion mount, we’d be able to swing it out so I could turn the TV to face me when I’m in the kitchen.

This is the option we ultimately chose. 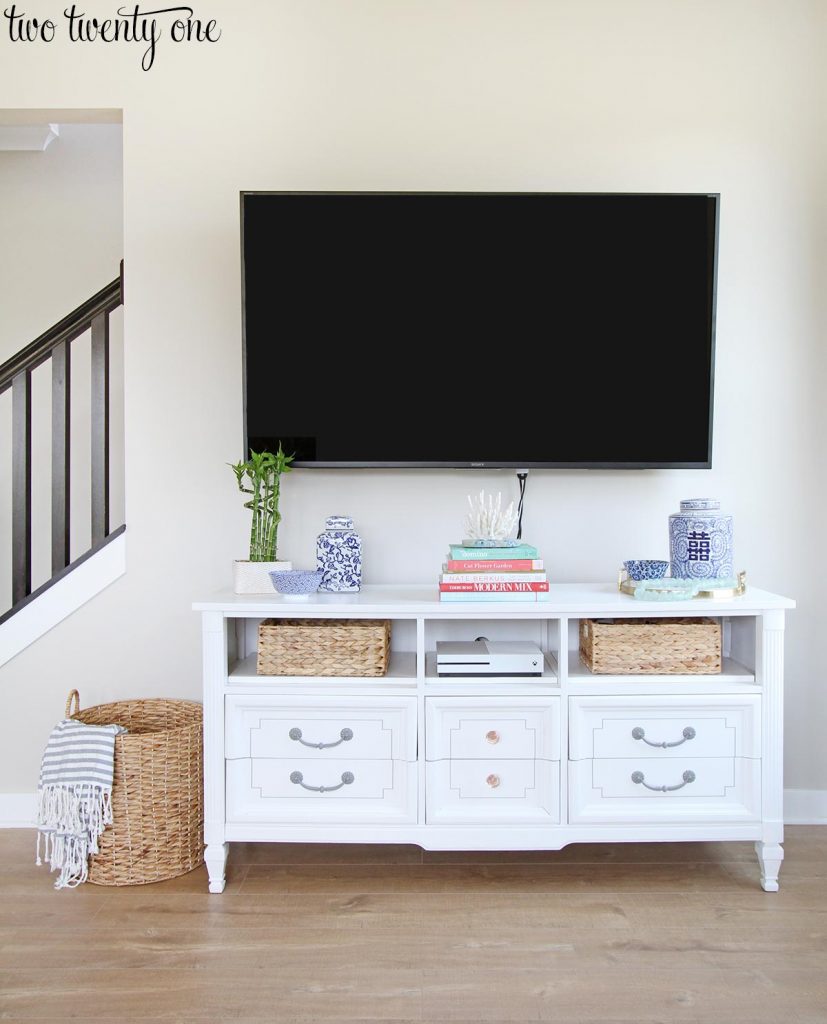 We really like the easy-to-install, full-motion TV mount we went with. It allows me to turn the TV to face me when I’m cooking dinner in the kitchen. 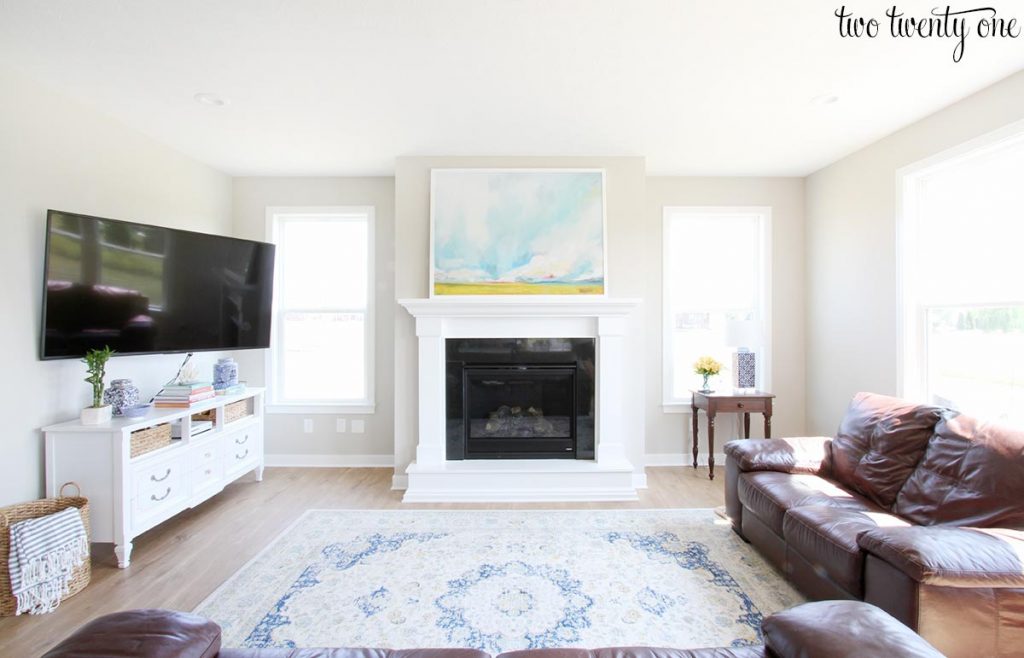 And when I’m done, I can move the TV back against the wall. 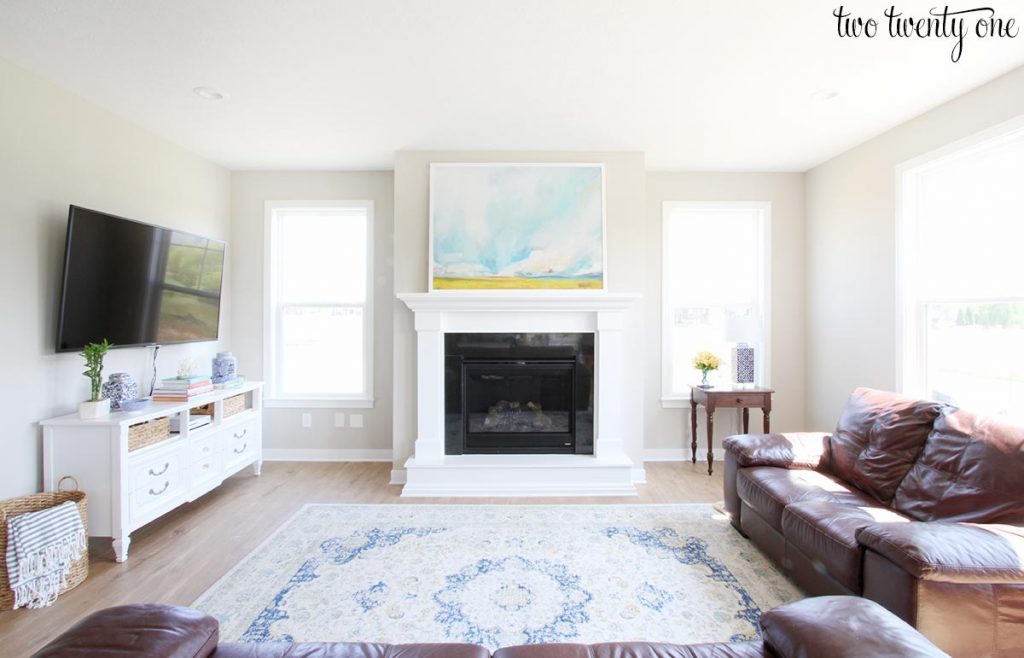 We haven’t bought much new furniture for the house yet because we wanted to live here a while and get used to the layout and dimensions, but eventually I think we’ll upgrade from the $50 Craigslist dresser that I turned into a TV stand.

I like how we mounted the TV high enough that I can decorate the top of the TV stand without blocking the TV. And now that we have a smart TV and have ditched cable/satellite, we don’t require as many boxes on the top shelf. I used some extra baskets we had to fill in those spaces.

It also gives us peace of mind knowing Owen can’t pull the TV onto himself. In case you didn’t know, a child dies every two weeks when a TV, appliance, or furniture falls on them. And 70% of the time, it’s a TV. So mount or anchor your TVs, and furniture. 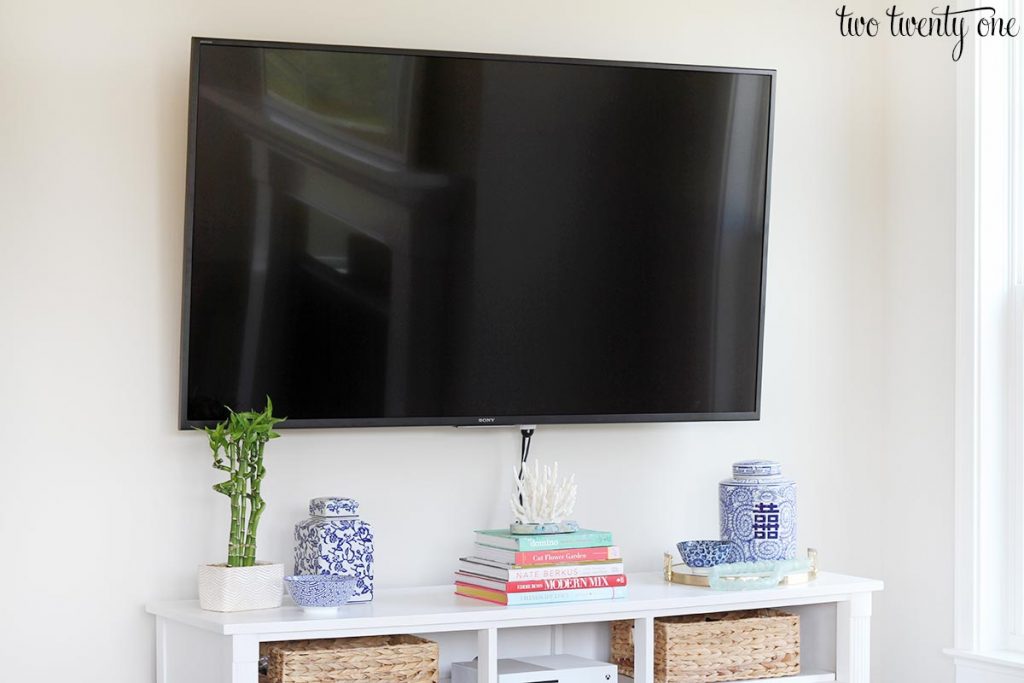 I’m still getting over how the living room isn’t symmetrical with the TV not mounted over the fireplace. But I think once we get window treatments and figure out the furniture situation, it’ll look a lot better. And that painting most likely won’t live there year-round since it’s rather spring/summery. 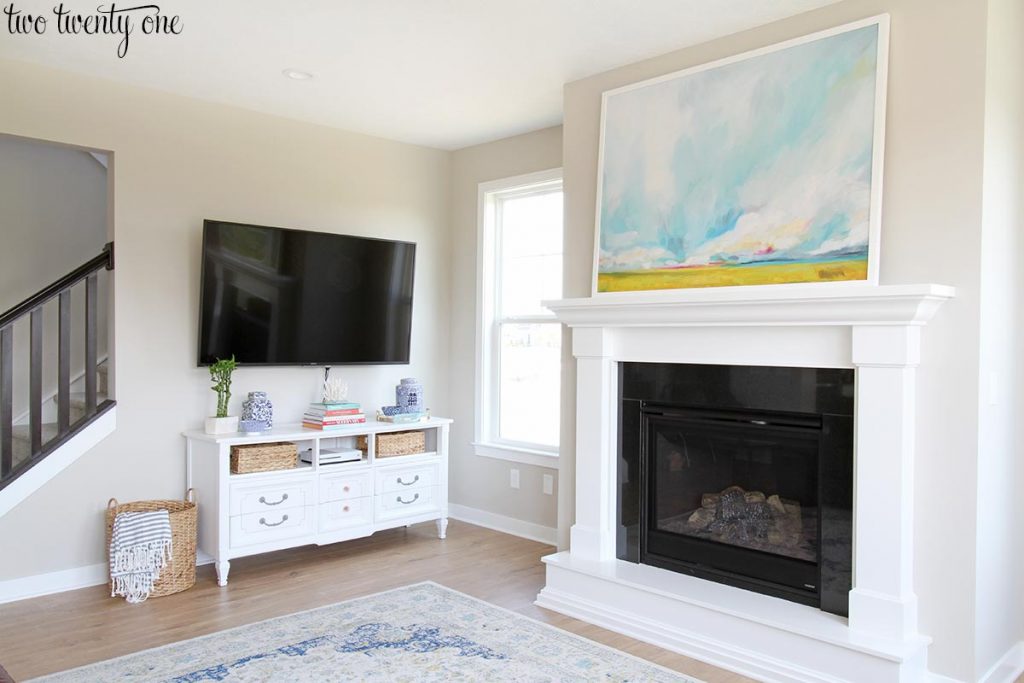 SANUS has a great MountFinder tool on their site that helps you choose what TV wall mount is best for your needs. Their HeightFinder is also a great tool. You enter all your TV information, how high you want/need to mount the TV and it gives you the measurements.

Get the latest DIY projects, organization ideas, tips & tricks and more delivered to your inbox!
Your information will *never* be shared or sold to a 3rd party.
« Here We Go!
Pregnancy No. 2 Q&A »