With Owen, we used his dresser as his diaper changing table. We’re using the same dresser/changing table set up in Emmett’s nursery (still under construction), but we added a changing table into the mix with baby #2. 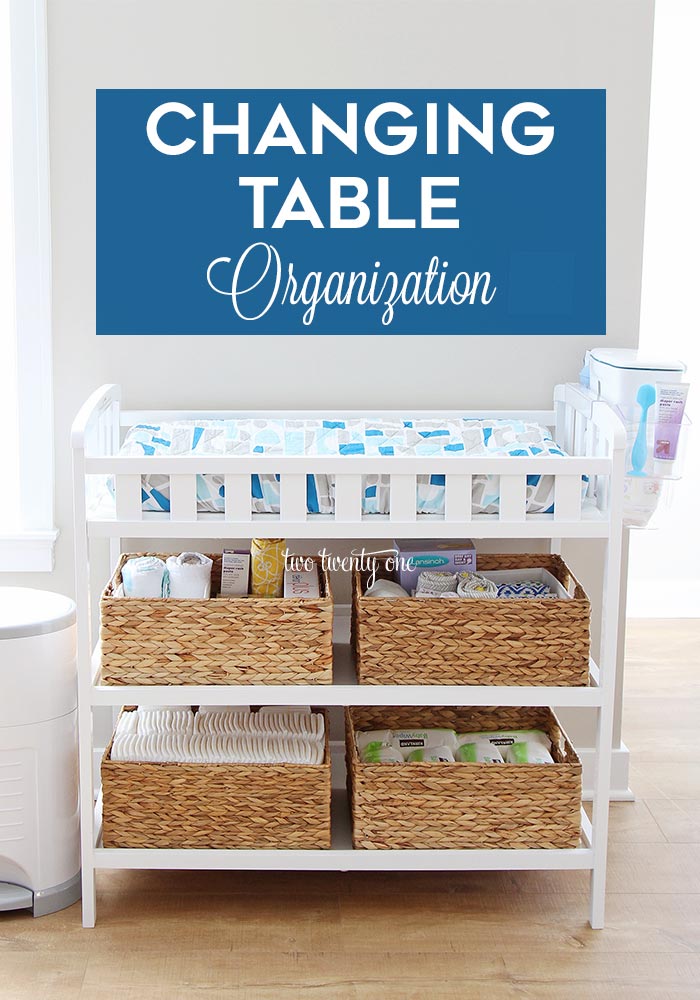 In our old house, the living room, where we spent most of our time, was in the middle of our house with our master bedroom to the right and Owen’s nursery to the left. So when Owen was a newborn, we only had to walk all of 10-12 steps to his nursery to change his diaper 10+ times a day or change his spit-up-on clothes.

Now that we live in a two-story house, we wanted to set up diaper changing table on our main floor so we wouldn’t have to go up and down the stairs 10+ times a day while carrying a newborn (and this kid needs his diaper changed more like 14+ times a day). This was especially important for me in the weeks following giving birth when I was encouraged to take it easy.

Since I didn’t want to drop a ton of money, I got this changing table for less than $60 and four baskets at Marshalls. I figured we can sell or donate the changing table once we’re done with it. 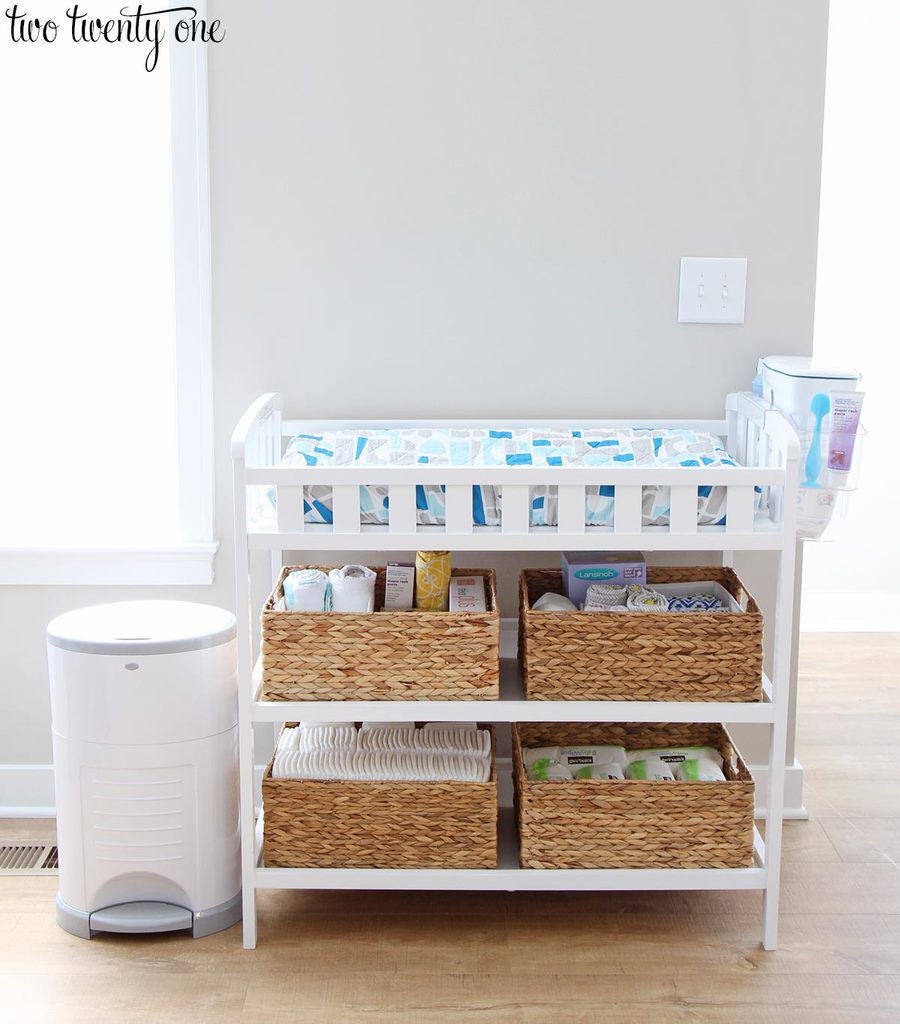 Organize with Baskets or Bins 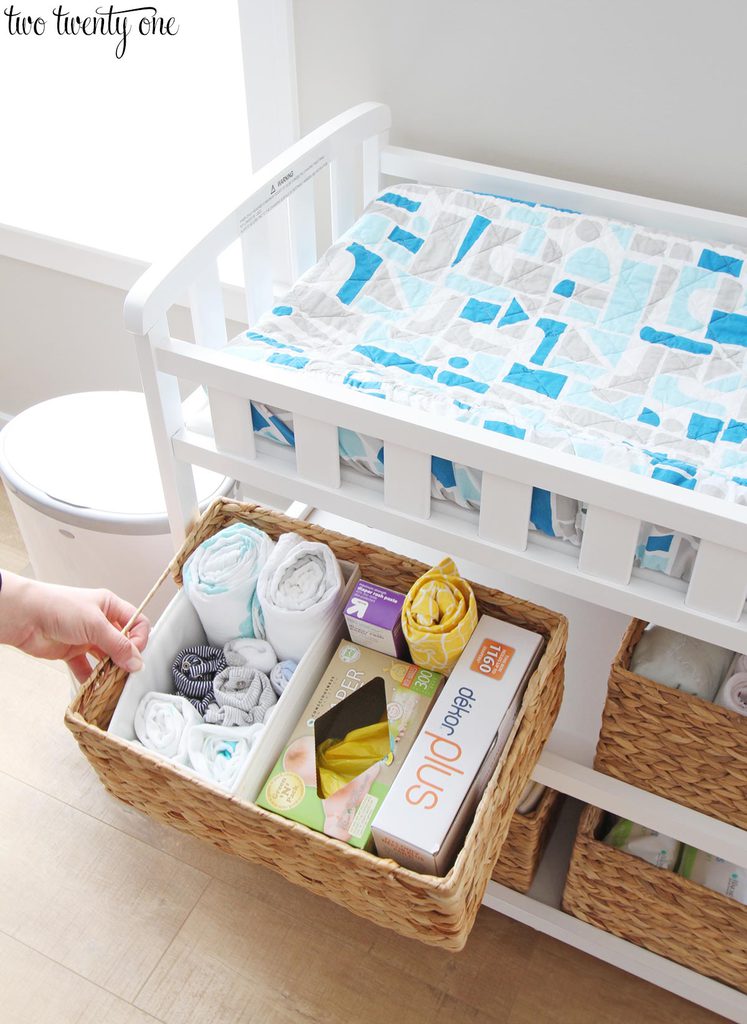 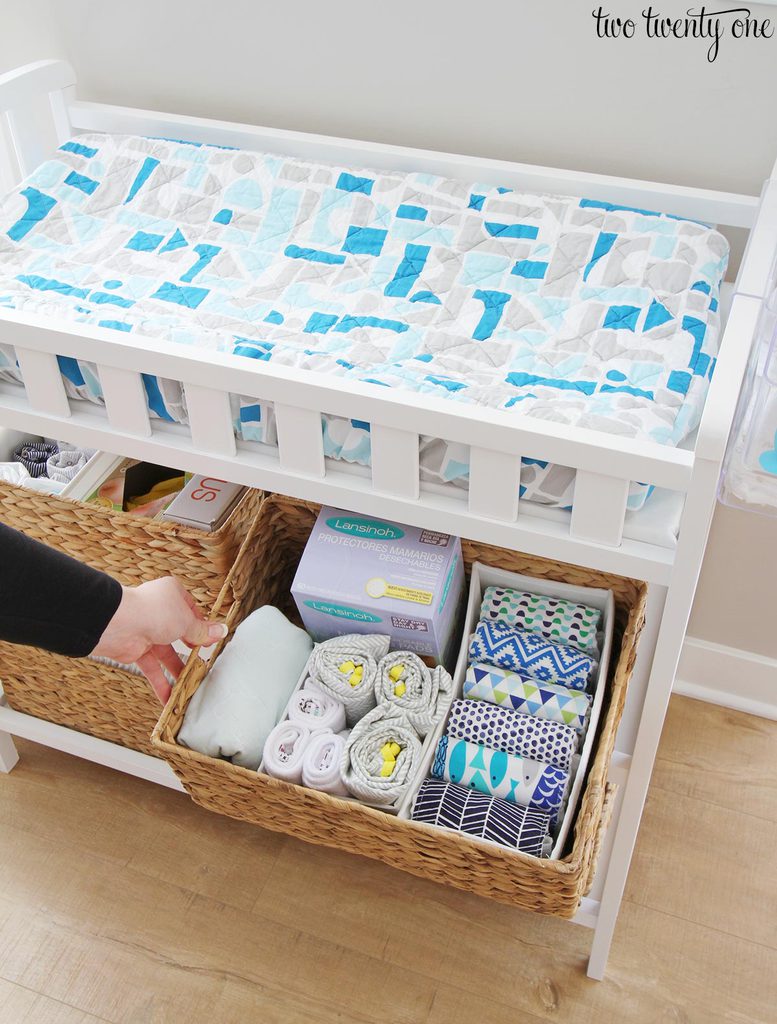 The bottom left basket is for extra diapers. 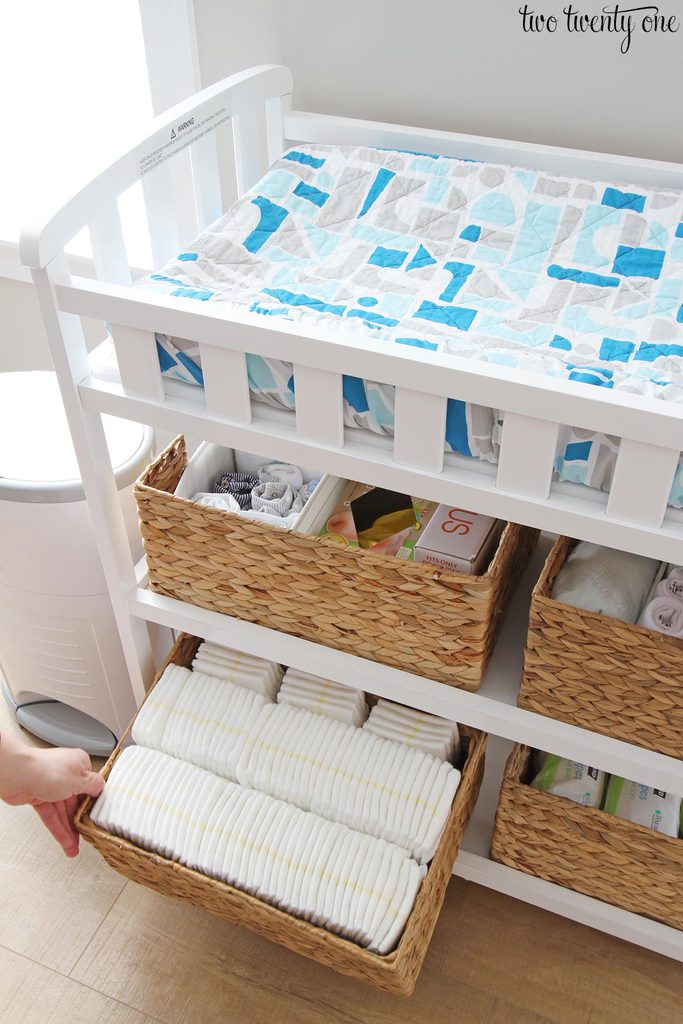 And the bottom right basket is for extra wipes. 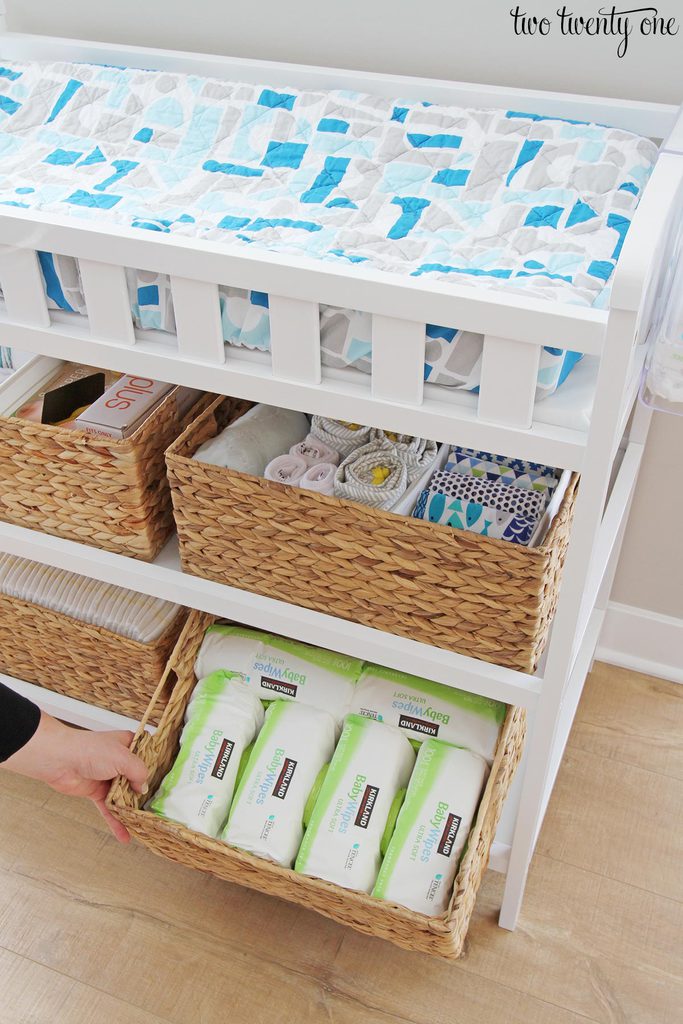 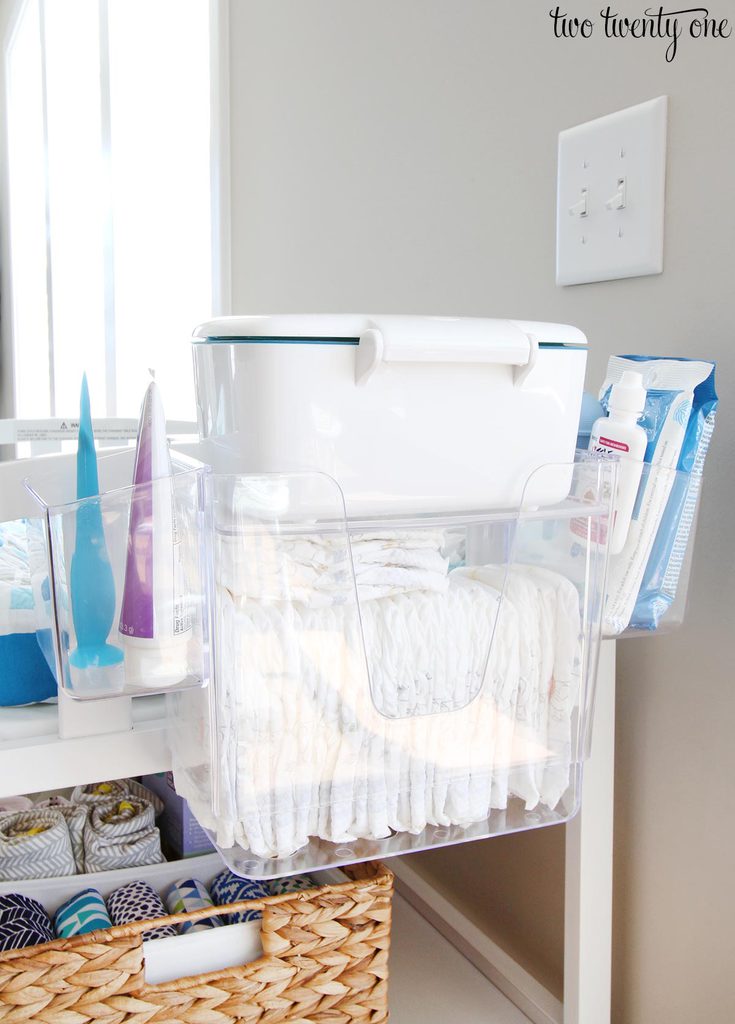 The diaper caddy hooks onto the side of the diaper changing table. It slides around a little bit, but it’s never fallen off. 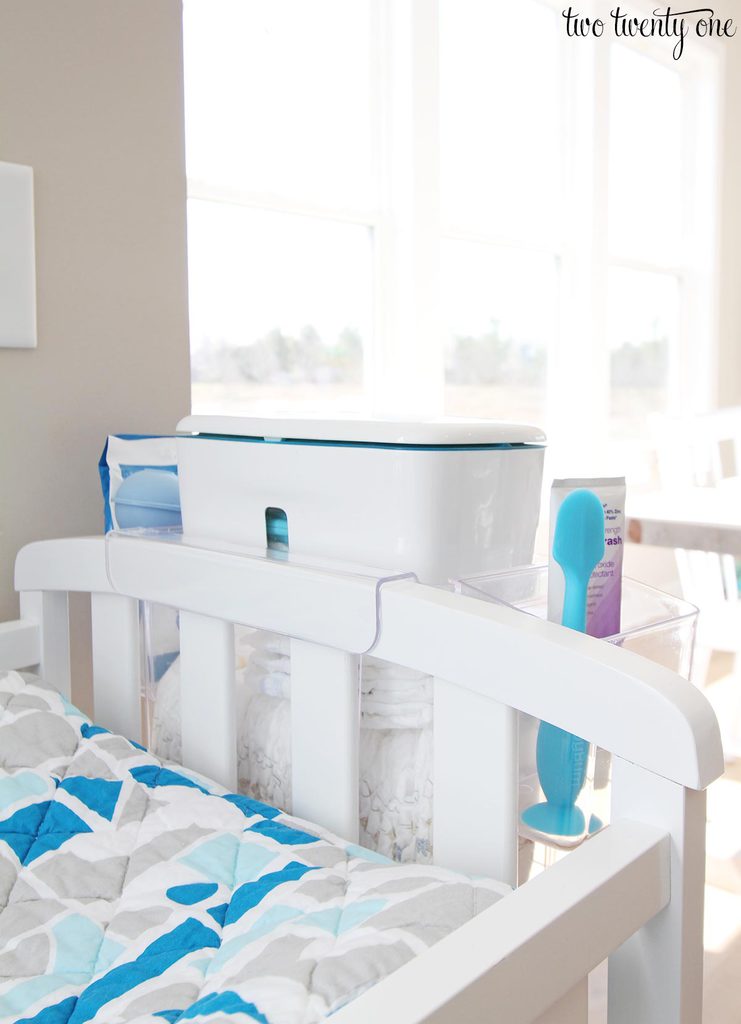 The changing table comes with a pad, but I like how a contoured changing pad keeps babies more contained. And this one was only $14. I scored the changing pad cover from Land of Nod (now Crate & Kids) when it was on clearance for $6, so unfortunately, it’s no longer available. 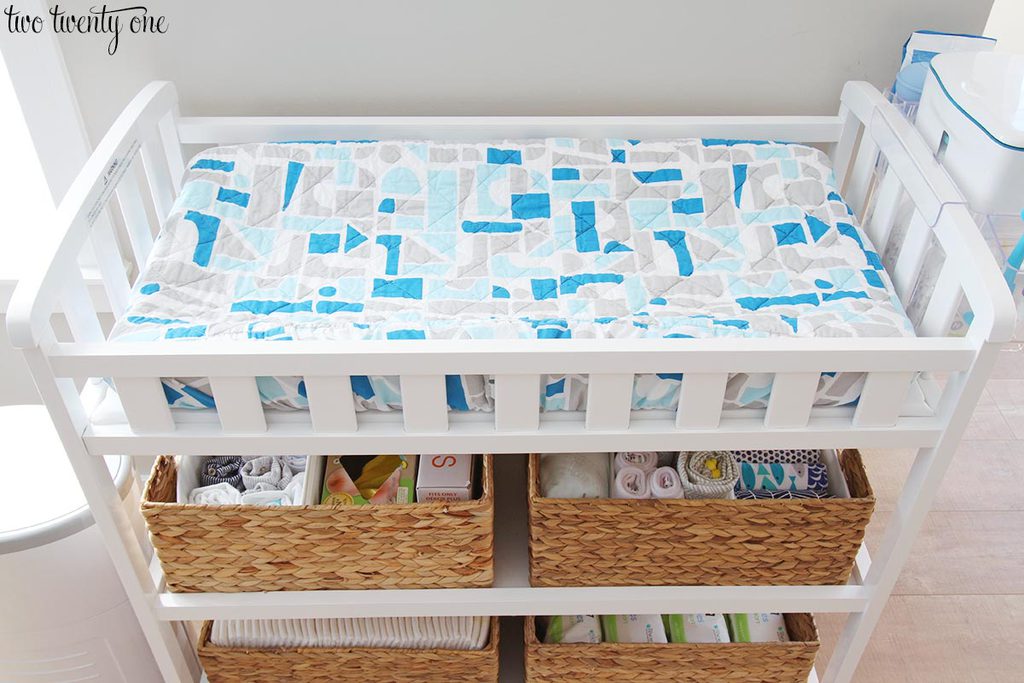 My parents gifted us this diaper pail. We really like it so far. No smells can be smelled. But then again, newborn diapers don’t really smell anyway. Plus, when Emmett starts on solids we’ll do what we did with Owen’s #2 diapers– put them in a diaper bag and take it out to the big garbage can in the garage. 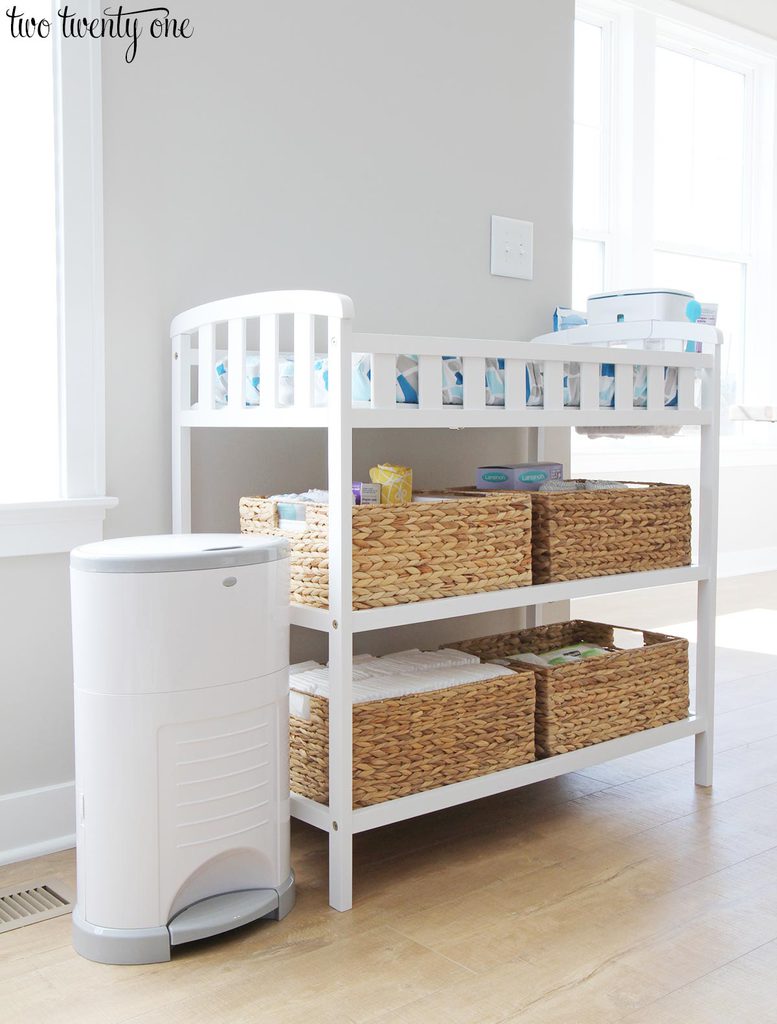 We love having this changing table on our main floor. I like how I can still keep an eye on Owen while he’s playing or eating breakfast or lunch if I need to change Emmett. And it’s been nice not having to go up and down the stairs numerous times a day.

Get the latest DIY projects, organization ideas, tips & tricks and more delivered to your inbox!
Your information will *never* be shared or sold to a 3rd party.
« Friday Favorites
Emmett’s Birth Story »